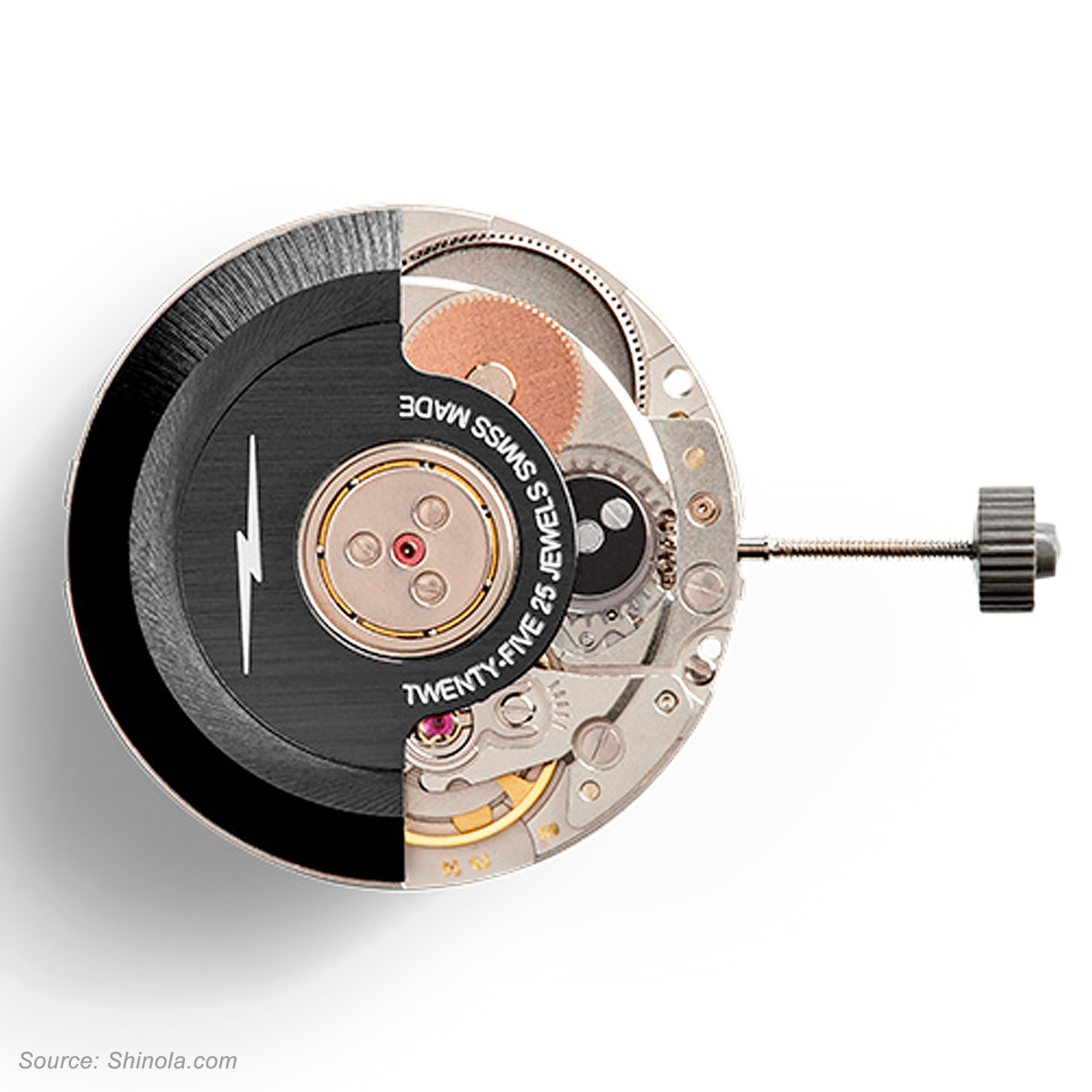 The Shinola caliber Argomatic R-150 is basically a Shinola branded Ronda caliber R150.The Shinola version has a black rotor with a white Shinola lightning bolt logo and white text that reads: Twenty-Five 25 Jewels Swiss Made. It appears that it also has a different datewheel than the original R150: the Shinola version has a black background with white date markers, the Ronda has a white background with black numbers.

The Argomatic R-150 is the first Shinola branded mechanical or automatic movement offered in a Shinola wristwatch. In Shinola’s own words:

“The Argomatic R-150 is Shinola’s first automatic movement developed and manufactured by our Swiss partner, Ronda AG. Ronda has been one of the world’s premier watch movement manufacturers for over 70 years.” –source

What’s interesting is that since announcing the Lake Erie Monster on November 7. 2017, Shinola appears to have stopped using the Argomatic R-150 and replaced it with the Sellita SW200-1, which is found in at least 14 models at the time of this post.

“It’s what’s on the inside that counts with a mechanical watch. Powered by your motion, Shinola mechanical watches are self-winding with an Automatic Sellita SW200-1 movement. This Swiss automatic movement drives the hours, minutes, seconds, and calendar aperture function of all of our mechanical watches for men and women. Twenty-six jewels help reduce friction to maintain accuracy, and with a 38-hour power reserve, you can trust this timepiece with your every move.” –source

Where is it made?

Shinola states that the Argomatic R-150 is built in Switzerland from Swiss components, then shipped to Shinola in Detroit where the movements are installed into the watch cases.

“Once the Argomatic R-150 movement arrives in our Detroit watch factory from Switzerland, the Shinola watch team installs the movement into the watch, finishes assembly and performs an underwater pressure test, as well as quality control checks. Built from high-caliber Swiss components, the R-150 features 25 jewels and boasts a 40-hour power reserve.” –source

According to official documentation by Ronda, the calibre R150 (same as the Shinola Argomatic R-150) is claimed to have an average accuracy rating of +/- 12 seconds per day with a maximum deviation of rate up to 30 seconds per day. Isochronism after 24 hours with +/-20 seconds per day. Ronda tests each movement in two positions at the factory. The R150 is equipped with an index system regulator for fine-tuning accuracy.

Since the Argomatic R-150 is a Shinola branded version of the Ronda R150, you cannot simply order a direct replacement. You can, however, order an unbranded R150 if you need to replace (or use parts for repairing) the movement inside your Shinola watch.