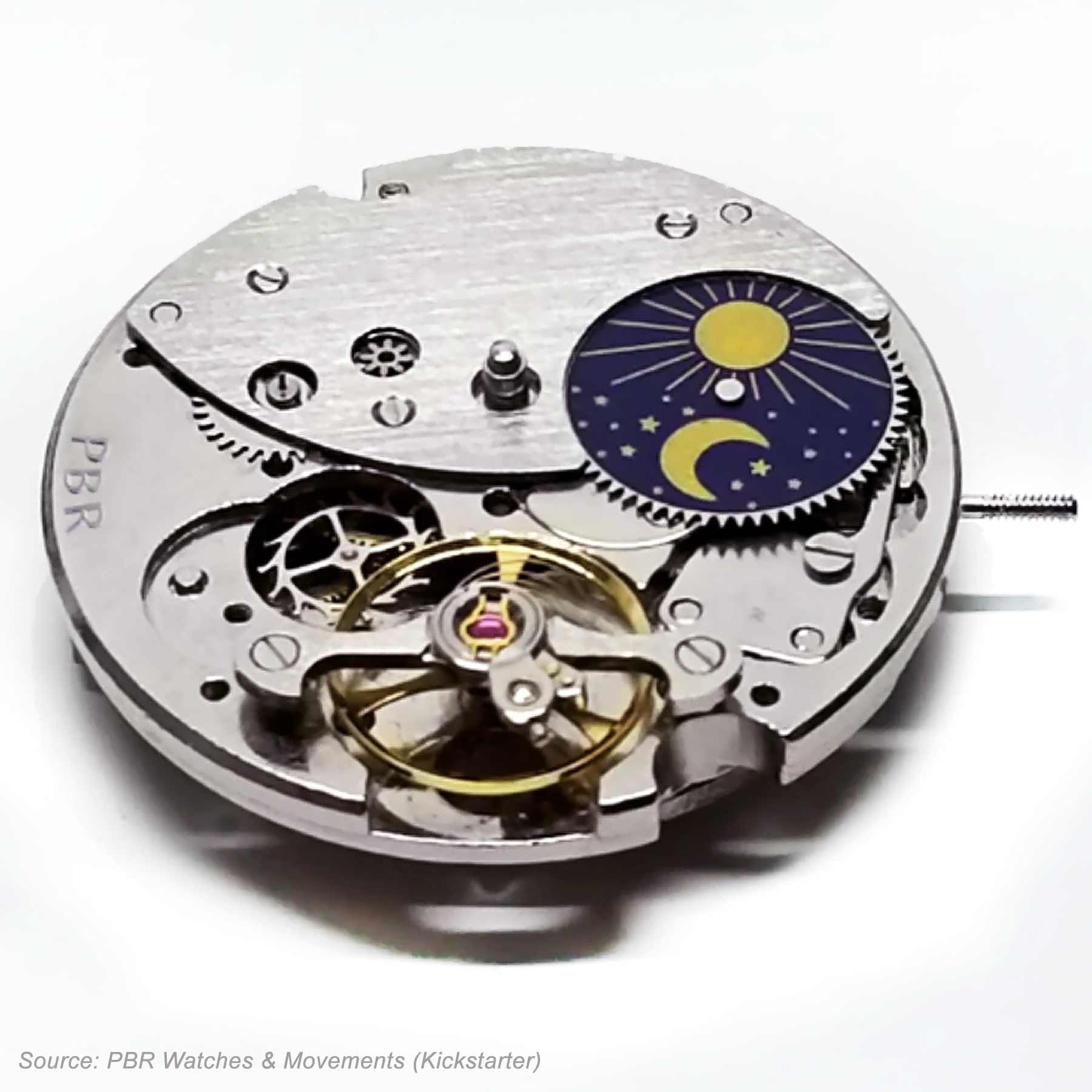 The PBR caliber PBR D-82 is a 2 hand automatic movement with a 24 hour subdial, day/night indicator, and an open balance wheel with a visible regulator. This caliber was found on a Kickstarter campaign created by PBR Watches & Movements based in Madrid, Spain.

Supposedly, this caliber was developed by PBR can only be had in the Kickstarter exclusive PBR Aviator Automatic limited edition watch. At €189 (about $225 USD) it seems like an unbelievably great bargain for a microbrand watch with what sounds like an in-house movement and is made in Spain. Read on…

PBR states that they put over 250 hours of design evolution into each model they created.

“We believe that luxury timepiece should be exclusive and shouldn’t be mass produced. Therefore, every watch model from PBR is assembled by hand and is limited edition to 200 pieces (Automatic Series) and 100 pieces (Quartz Series) – you will be sure you own a watch that is rare and unique, something you can truly own.” -Source

According to the brand’s About page, they manufacture their own movements:

“Company founded by a young team in Madrid, Spain. Our desire is to be able to manufacture the best price / quality ratio on the market and for this we manufacture our own watches and movements.” –Source

In the brand’s own words:

Update: More info from the comments posted by the brand on the Kickstarter campaign page…

“…There is no “base” on which our movement is made, it is not an existing “modified” movement, it is a new movement, with some parts used in many other luxury movements, but there is no “base”. The 24 hour subdial is fixed to the time of the main hands. It is an AM / PM indicator. The moon phase is a true moon phase. This watchmaking complication can indicate the phases of the entire lunar cycle using the dial indicator. Our moon is the only indicator that we have of the passage of the months since the average duration of the lunar cycle is 29 days. The precision of the complication is +100 years…” –Source

Regulator on the dial side:

The PBR D-82 features and open-heart aka open balance wheel at 6:00 with a regulator visible from the dial side.

In PBR’s own words:

“The regulator is one of the things that hails back to the start of watch making, alongside other historical items like pocket watches. It’s nothing new that mechanical watches can be seen as something of an anachronism these days, but a big part of the reason why they remain so successful is the “soul” that draws us in.” –Source

“We bring you an exquisite automatic watch with moon phase complication, 24-hour indicator and of course with the regulator visible on the dial.” – Source same as above


While some watch collectors may appreciate the look of the open balance wheel and visible regulator, others who are confident enough with their tinkering skills will not like that they need to pull the entire movement out of the case in order to make adjustments and regulate the timing. 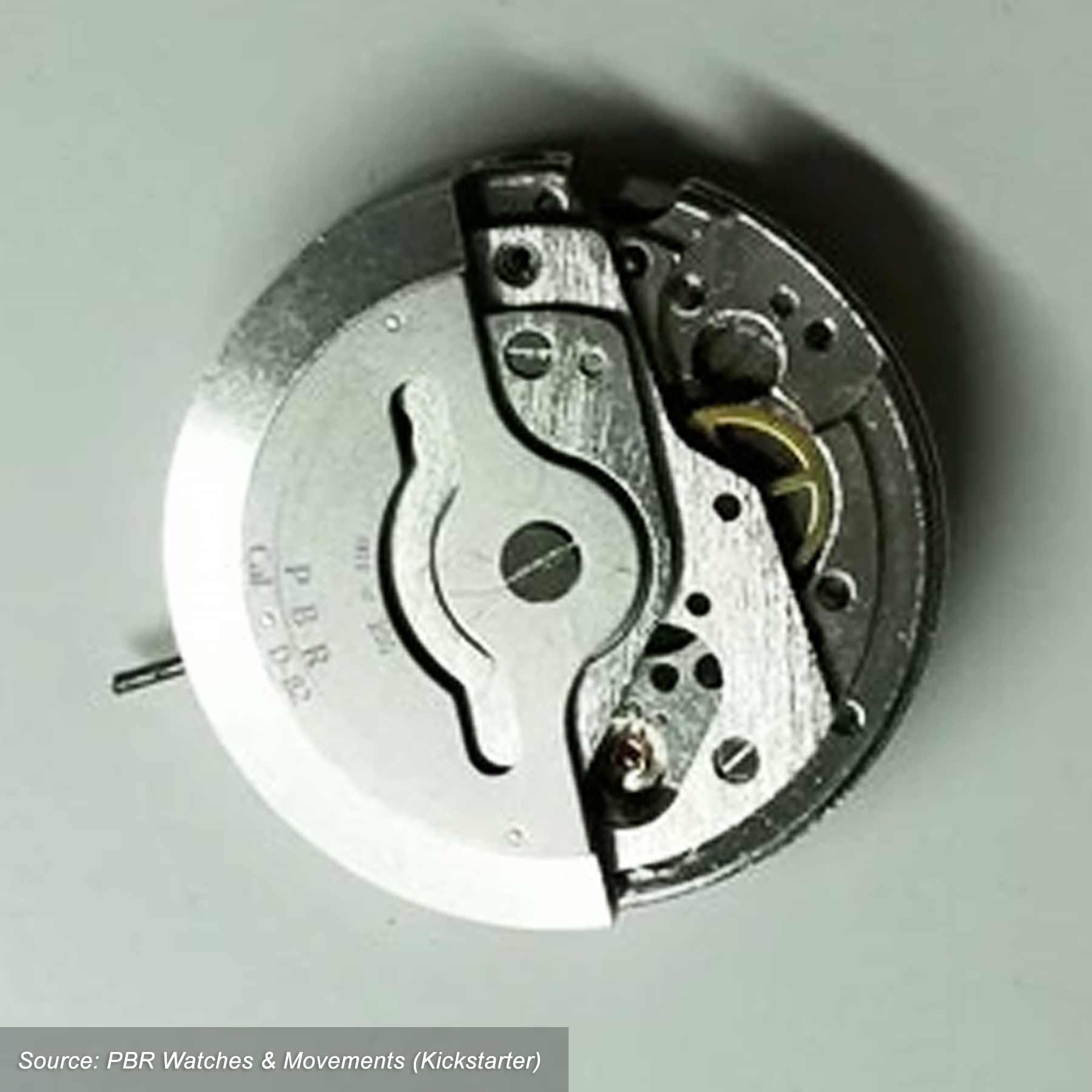 PBR does not appear to have an official website, so most of the information about the PBR D-82 movement is found on their Kickstarter page. All of the brand’s other models are powered by Japan-made Miyota movements, but nowhere on the page can the origin of the caliber PBR D-82 be found. The only mention of country or location of development and/or production appears to be Switzerland or Spain:

“For the past two years we’ve been working together with watchmakers from Spain and Swiss developing multiple prototypes and perfecting our designs and movement.” –Source

“We are partnering with world leading (Swiss and Spanish) timepiece producers, with +50 years of industry leading experience to bring you a line of high exceptional quality watches. This partnership has allowed us to maximise quality without compromising on specification. ” –Source

As you can see, the verbiage in the description would lead one to believe the caliber PBR D-82 is of Swiss or Spanish origin. Interestingly, the PBR D-82 spec list provided on the Kickstarter page shares many of the same attributes with the Miyota 9 series:

Even more interesting is that the spec list on the Kickstarter seems like it very well could have been copied and pasted from the Miyota official documentation. The reason for this deduction is because Miyota is perhaps the only brand that writes their jewel count as “24 pcs”, as in 24 pieces of jewels, which other movement manufactures typically do not say.

Furthermore… the design of the day/night indicator is standard on many made in China movements with the same complication. On top of that (or on back of that) is the cutout on the rotor which also points to a Chinese factory origin.

Update: More information about the origins of this movement (and the watch it powers) was posted by the brand in the comments section of their campaign.

“Our watches will be made in Spain. As we have previously commented, throughout these last three years we made several studies about our production and we concluded that manufacturing in China is only good if you want to manufacture low quality watches or if you want to manufacture a large number of watches. This is because good Chinese manufacturers only offer good prices for companies with a large production volume and we do not manufacture on such a large scale right now. We could reach an agreement with a Chinese manufacturer that adjusts to our current production volume, but the manufacturing quality is not what we want for our watches. That is why we prefer to have production here in Spain, the quality standards are extremely good here and we want to demonstrate that our watches are made of exquisite quality, even more in our first collection.” –Source

“As for our movement, same thing: it is made in Spain. We have suppliers from different countries for many parts of our watches, but we manufacture and assemble them here.”

There you have it. The D-82 is a movement made in Spain. If you know of any other Spain-made watch calibers, please share in the comments below.

The PBR Kickstarter campaign was not just for one watch, but for an entire lineup of watches. It is slightly overwhelming (and confusing) because it contains at least 4 different models. Scrolling from top to bottom of the campaign page you will find the Automatic Aviator which contains the caliber PBR D-82 featured in this post, the Core which has a Miyota caliber 9015, the Nova with a Miyota 9029, a quartz chronograph with a Miyota FS10, and a time only quartz dress watch with a Miyota 2025.

The campaign was launched around May 2020. As of this post (September 2021), it appears that they are still working on getting the watches shipped to backers. Although frustrating, it is understandable given that the brand launched in the middle of the world situation and they manufacture their own movements after all.

Observation: In the About the PBR D-82 section above, the last bullet point has a quote from the PBR Kickstarter page: “The calibers will run for more than 40 hours and keep accuracy within -10～+30 seconds/day, with a posture difference of under 40 seconds/day.” This line was also found written word-for-word on another Spain based Kickstarter campaign for a brand called BEI here. Coincidentally, BEI launched in November 2020 and like PBR, has still not been able to deliver watches to their backers.

Someone wants to start a business. Watches seem hot, let’s sell watches! Ok, let’s figure out where to get some watches made. The innocent folk simply want to create something that will turn a profit. Fair enough, business is business. But innocence, when it comes to watch manufacturing, is not a good trait to have. Once the unsuspecting is pulled into the unrelenting web of the Ali trading companies, the challenges begin: starting with the challenge of discerning false promises from reality. This is where is gets dangerous… to ask Kickstarter backers for their trust when the trust extended to the trading company is at maximum capacity and not yet realized. You see, a trading company is not a factory. They are middle people who often work from offices or cafes with laptops and reel customers in with sweet promises and a full index of rebuttals that blend together to create a perfect storm of what the unsuspecting will come to learn is far from the truth of what is actually possible for them to achieve. Many noobs, ignorant to the watch industry, are lead to believe that an entire watch design or caliber will be developed from scratch for their brand. This ultimately leads to the brand then ignorantly conveying these notions to prospective buyers via their marketing campaigns. The result is almost always the same: either watches that are far from what was promised, almost on an embarrassing level;  production schedule being far from what was promised, with excuse after excuse; products that are already part of an extensive catalog and being used by other brands; the possibility of zero goods being delivered after the initial samples are sent. It’s scary. This is why one cannot simply dive into the world of watch manufacturing. It’s not like selling a t-shirt or water bottle.