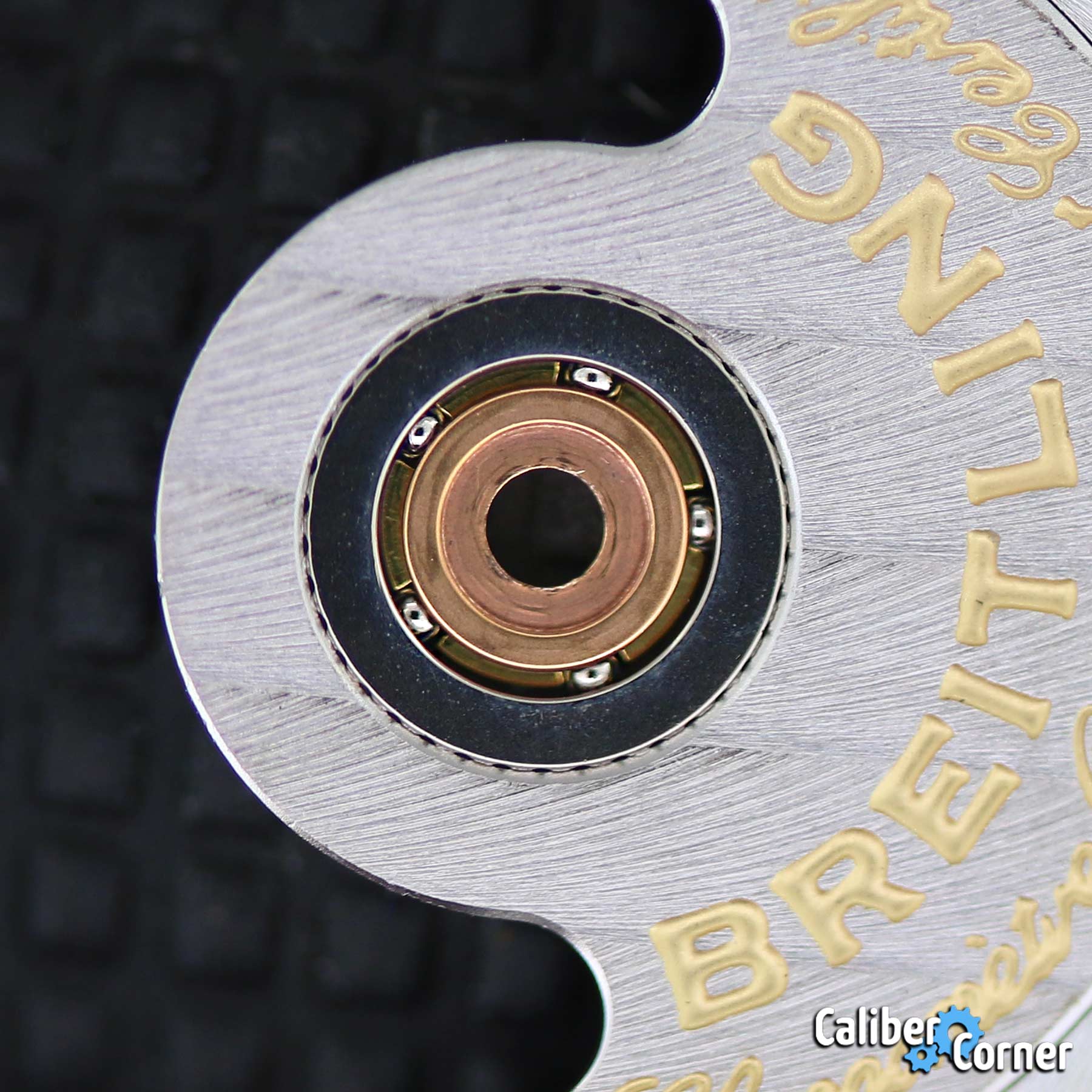 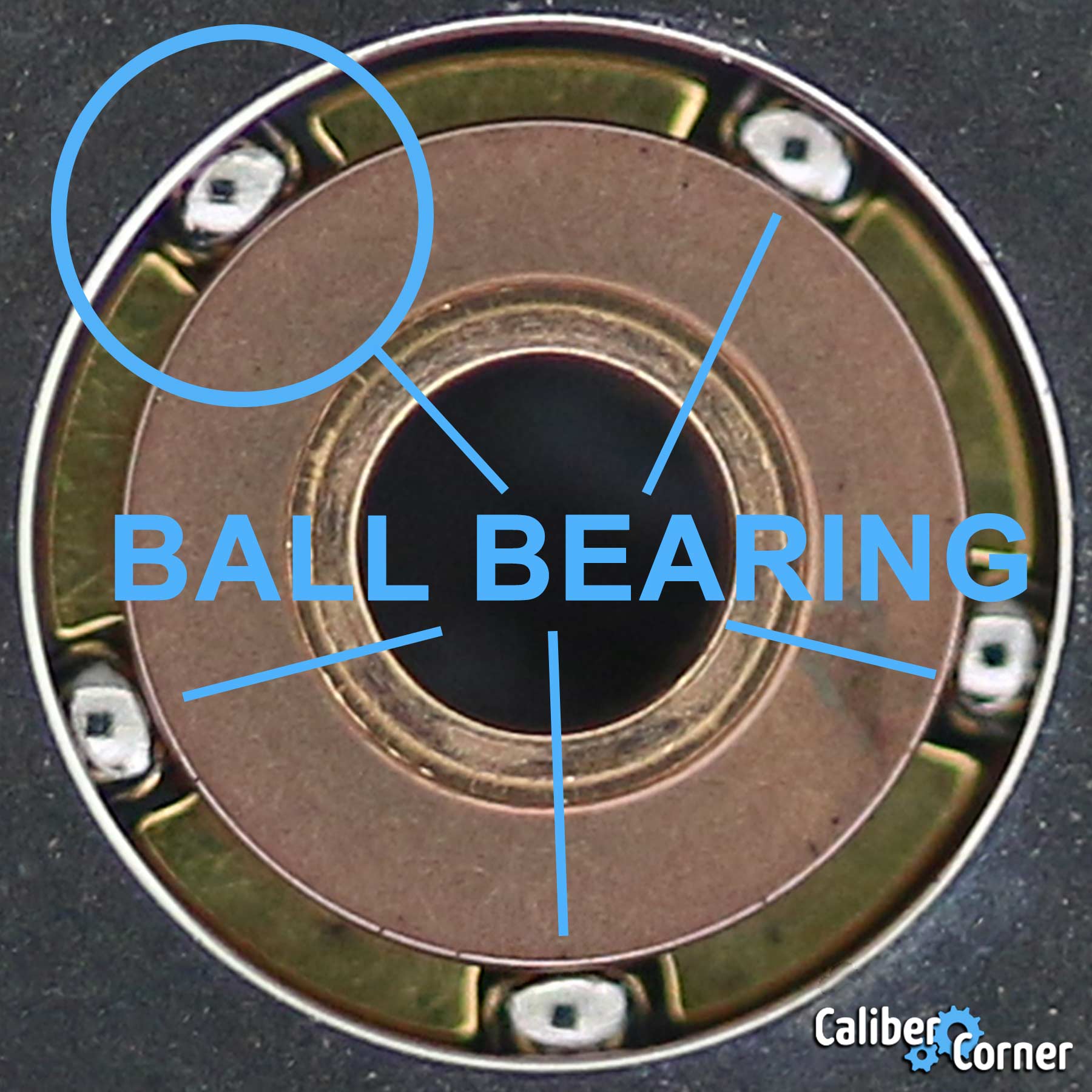 Invention of the Ball Bearing Rotor

In 1948, Eterna announced a friction-reducing ball-bearing mounted rotor system as part of the Eterna-Matic. Have you ever noticed how the Eterna logo consists of 5 circles? That became their official logo the same year the 5 point ball bearing system was introduced.

You may notice that ETA movements use the ball bearing rotor system in their movements. This is because the ETA ébauche factory was a spawn of Eterna. As mentioned in this Wikipedia article:

In 1948, Eterna advanced self-winding watch technology with the development of the Eterna-matic automatic movement. The use of five strategically placed ball bearings made the movement very efficient and significantly reduced friction and resistance on the oscillating weight that wound the mainspring. This reduced the wear and tear on internal parts, increasing the watch’s accuracy and useful life. The new watch became popular soon, is probably the most famous Eterna watch and may be one of Eterna’s greatest designs. Its popularity was such that in 1948 Eterna adopted the image of five balls as its corporate logo.

Note: Keep in mind that ball bearing rotors are not limited to 5 balls. For example, the system can have 7 balls, 4 or even 3. See the read more link below!

In the past, Rolex used the jewel/bushing (sleeve type) rotor setup. Until recently, Rolex has used bushing style rotors on their watches. In some of their models (Red Sea-Dweller, Day-Date 40, Sky-Dweller, Daytona, etc.) featuring a ball bearing setup, they are using their own proprietary placement of the bearings and do not use the exact same technology that can be found in ETA movements. Their ceramic bearings are sealed in a lubricated enclosure, which supposedly will last through decades of use without needing replaced. Anyone who has handled a Rolex watch with a bushing rotor can attest to the fact that it’s very difficult to feel and hear the rotor spinning inside.

Disadvantages of a Ball Bearing Rotor

In reference to the Newer Rolex ball bearing rotors, SearChart on the Rolex forum said:

The downside of this new ball bearing system is that when it’s broken you’ll need to replace the whole rotor, unlike the older movements where you could just replace the axle.

Which one is preferred by watch enthusiasts?

Some watch geeks prefer the ball bearing rotor because it seems like the more logical choice for a constantly rotating part. Others believe in the bushing style rotors due to how long their have been used, and the quiet aspect (the newer, louder ball bearing rotors seems to be upsetting many Rolex owners). HRC-E.B. on WUS had some interesting insights on the subject:

Unless I’m mistaken, the main advantages of the bushing over the ball bearing are cost (yes, even in high-end movements), simplicity, size/packaging and a perceived advantage in winding efficiency, as a small diameter bushing theoretically lends greater leverage to the rotor, for better efficiency. It is also known to be very smooth (when properly maintained), compared to bearings, which you can sometimes feel/hear.

The disadvantage of the bushing are less support for the rotor (if the diameter is small, which would be the objective in using a bushing), making the rotor more prone to hitting movement parts/bridges/plates in case of shock, less shock resistance (the bushing can ultimately break…), and necessity of regular maintenance.

As far as I know, leaving aside the winding efficiency element for the time being, the ball bearing is, from a mechanical engineering point of view, superior to the bushing in every way. More support for the rotor, greater durability, less requirement for maintenance, better structural integrity, better shock resistance. And, the clincher: I believe that the technology is there nowadays to make a winding system based on a bearing-supported rotor as efficient as a bushing-based system. As to the packaging element, any new movement designed from scratch can accommodate bearings without issue.

A poll in the same thread had a total of 7 votes at time of this post, zero votes are in favor of the bushing style rotor. Six votes were for the ball bearing rotor, one vote for both are equal in performance. Not enough data to be useful, but interesting nonetheless.

At the time of this post, we found replacement prices of $10-20 online for the ball bearing part number #1497 for ETA movements. This part can most likely be installed in your existing rotor.

Let us know in the comments which rotor style you prefer and why. Also feel free to make any corrections to the information contained in this post.