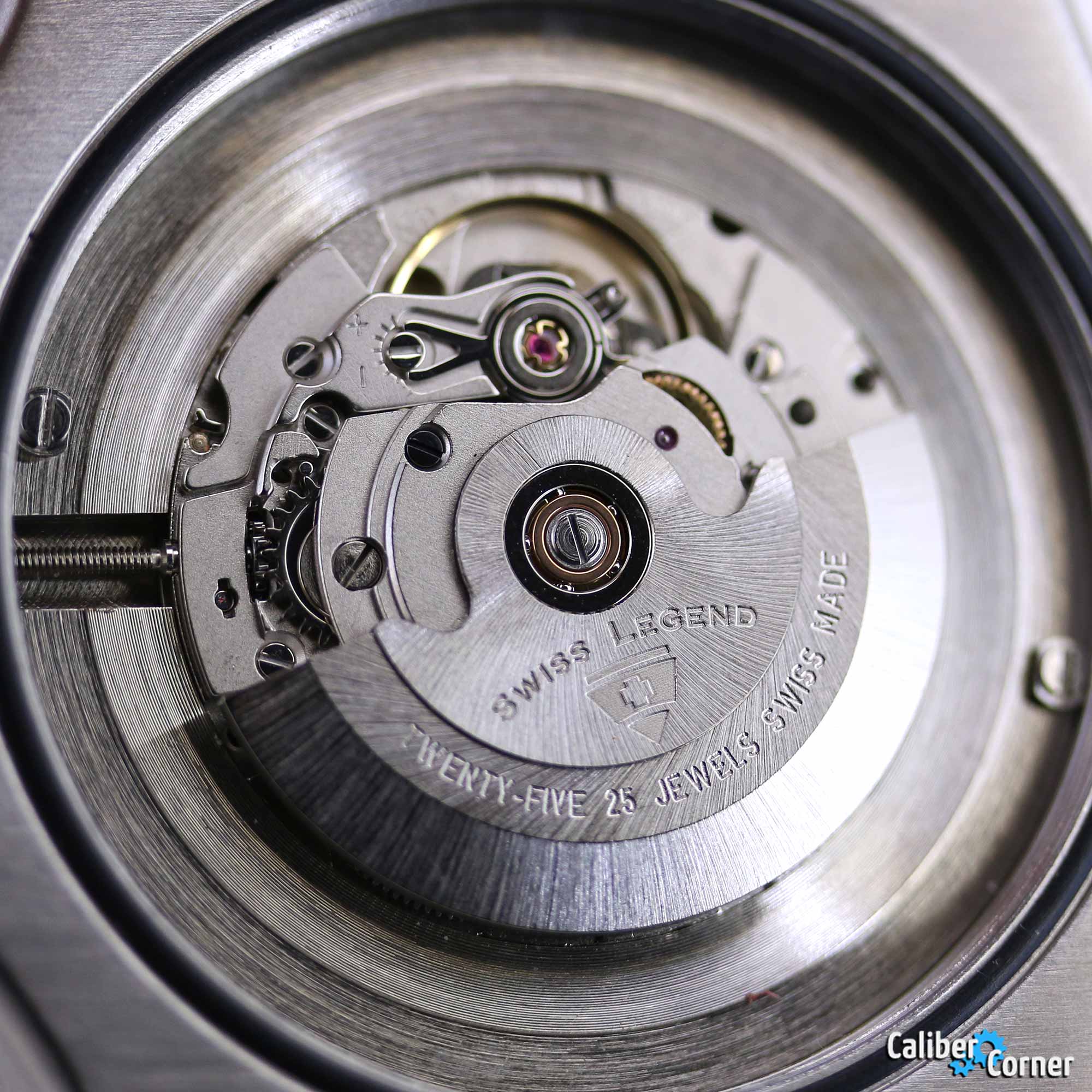 The ETA caliber 2836-2 is a Swiss made automatic movement with 25 jewels. This movement is part of ETA’s Mecaline collection.

There is also a similar caliber 2834-2. The main difference here is that the 2836-2 features an inner day of the week calendar wheel, placing the day indicator left of the date at 3:00 on the dial (with abbreviated spelling). The 2834-2 has an outer day wheel, placing a panoramic style day of the week window at 12:00 (with the full spelling)

Note: To avoid damaging the movement, do not attempt to set the date when the hands are between the hours of 9pm and 3am.

Note on hacking seconds: ETA refers to hacking seconds as “stop-seconds” and “fine timing devices”. It is interesting to note that on tech docs dated 2010, ETA lists this functionality as being optional. From 2010 until now, hacking seconds has become an increasingly popular topic of discussion, especially with affordable movements and microbrands entering the market. Although you may never come across a non-hacking ETA 2836-2, if it was made around 2010 or earlier, it’s quite possible that it was manufactured that way excluding the optional stop-second device.

According to ETA, it takes a minimum of 27 winds of the crown to fully wind the movement. The watch community seems to agree on 30-40 turns being sufficient to reach full power reserve. In contrast, when depending primarily on the rotor (oscillating weight) to wind the movement, it can take up to 1,250 turns or 1 hour and 30 minutes of the movement in motion.

Although the power reserve of the 2824-2 based movements, including this 2826-2, is widely known to be around 38 hours (for example, as listed in ETA tech sheets dated 2015), the official ETA website claims this caliber has a “typical power reserve” of 42 hours (as of 2021). Please comment below as to the power reserve you have experienced with your 2836-2 powered timepieces.

Different watches may may have a custom rotor depending on the brand, but the stock ETA 2836-2 rotor from the factory reads: 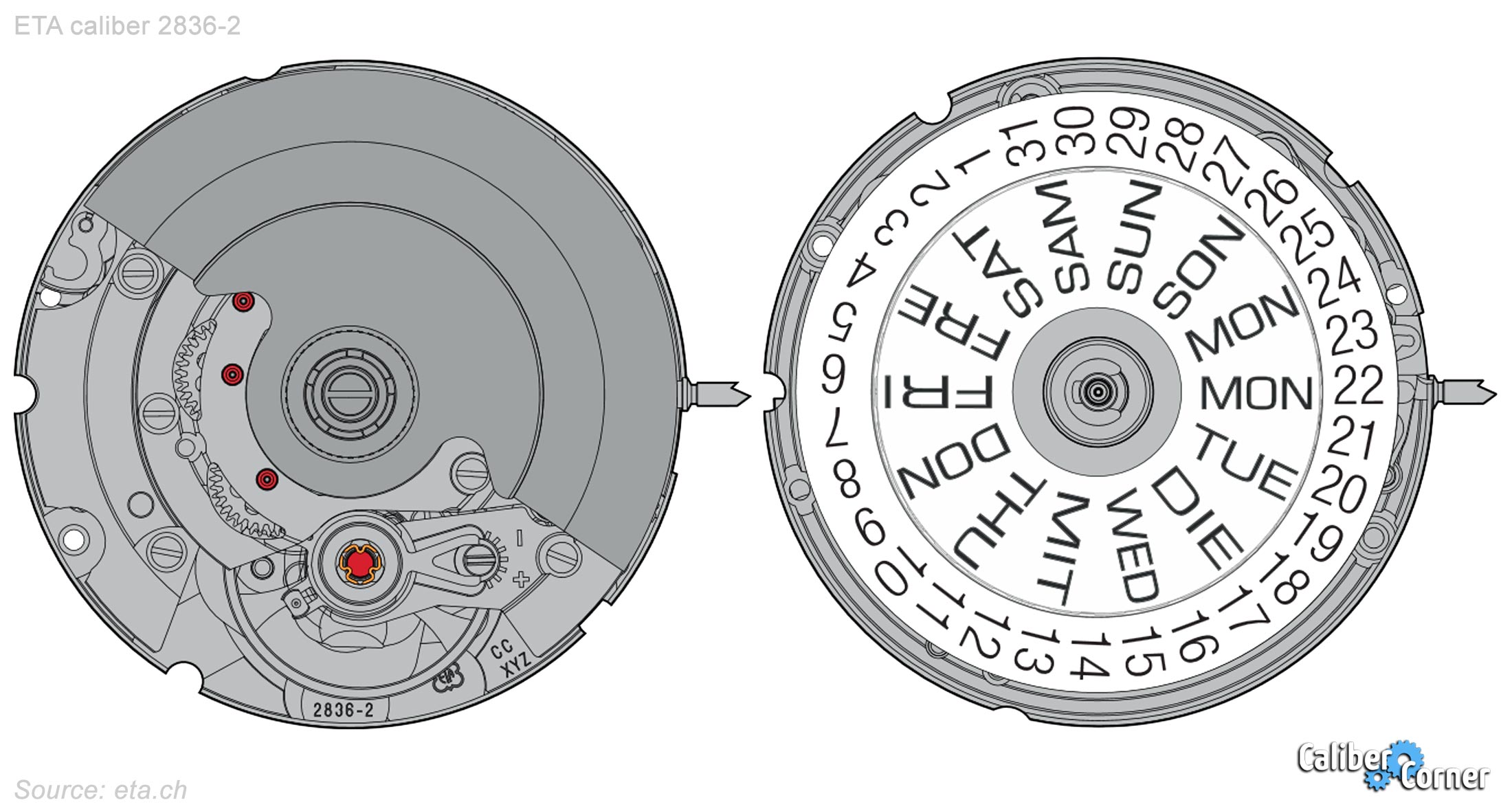 As with most ETA movements, although the 2836-2 is unavailable from ETA, replacements can still be found online. At the time of this post, prices for a single replacement movement were found in the range of $250 – $270 USD. Try here.

These are photos of the caliber 2836-2 found in this Swiss Legend Abyssos dive watch, 25 jewels with an Incabloc Novodiac shock absorber, and stamped: V8AL4 / 128. 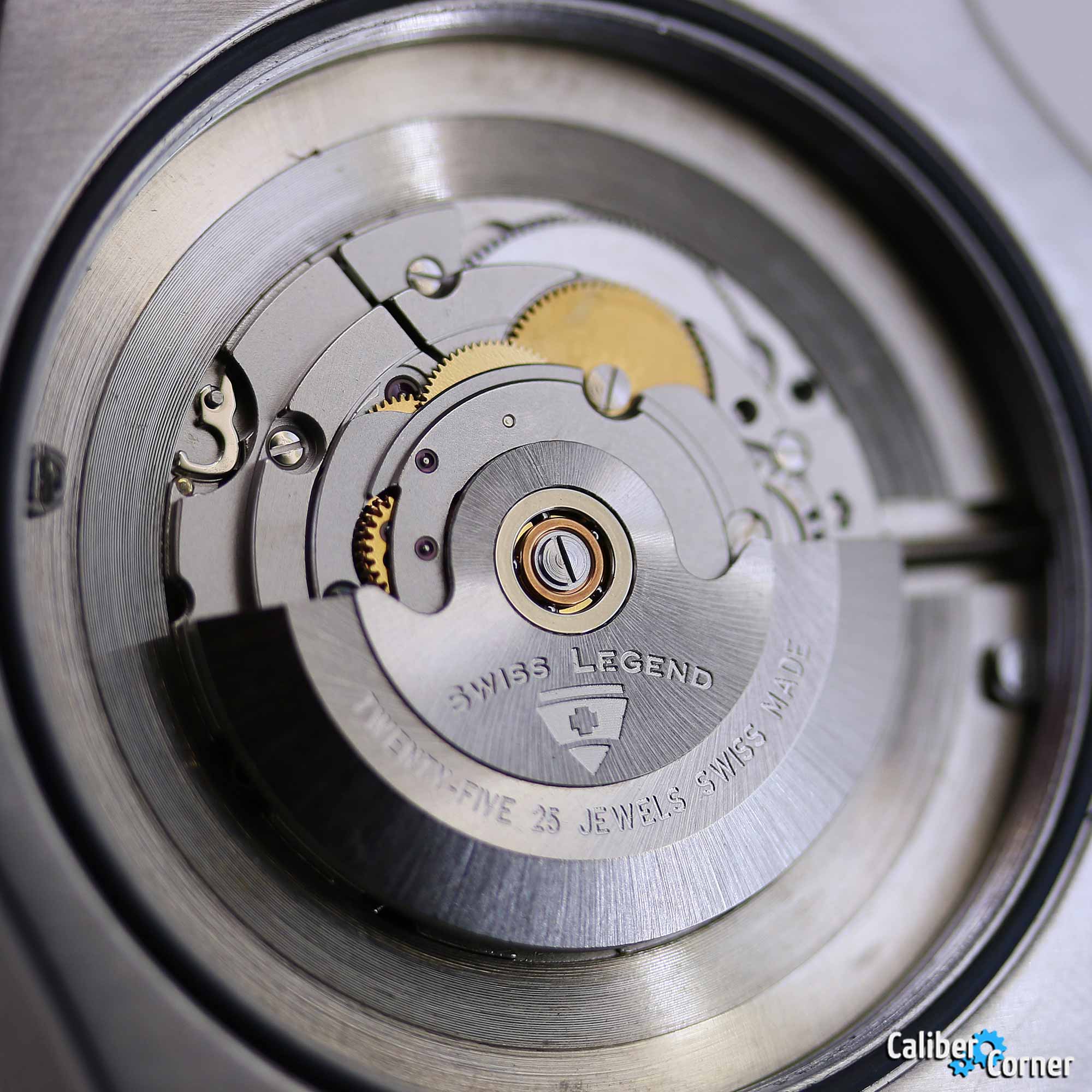 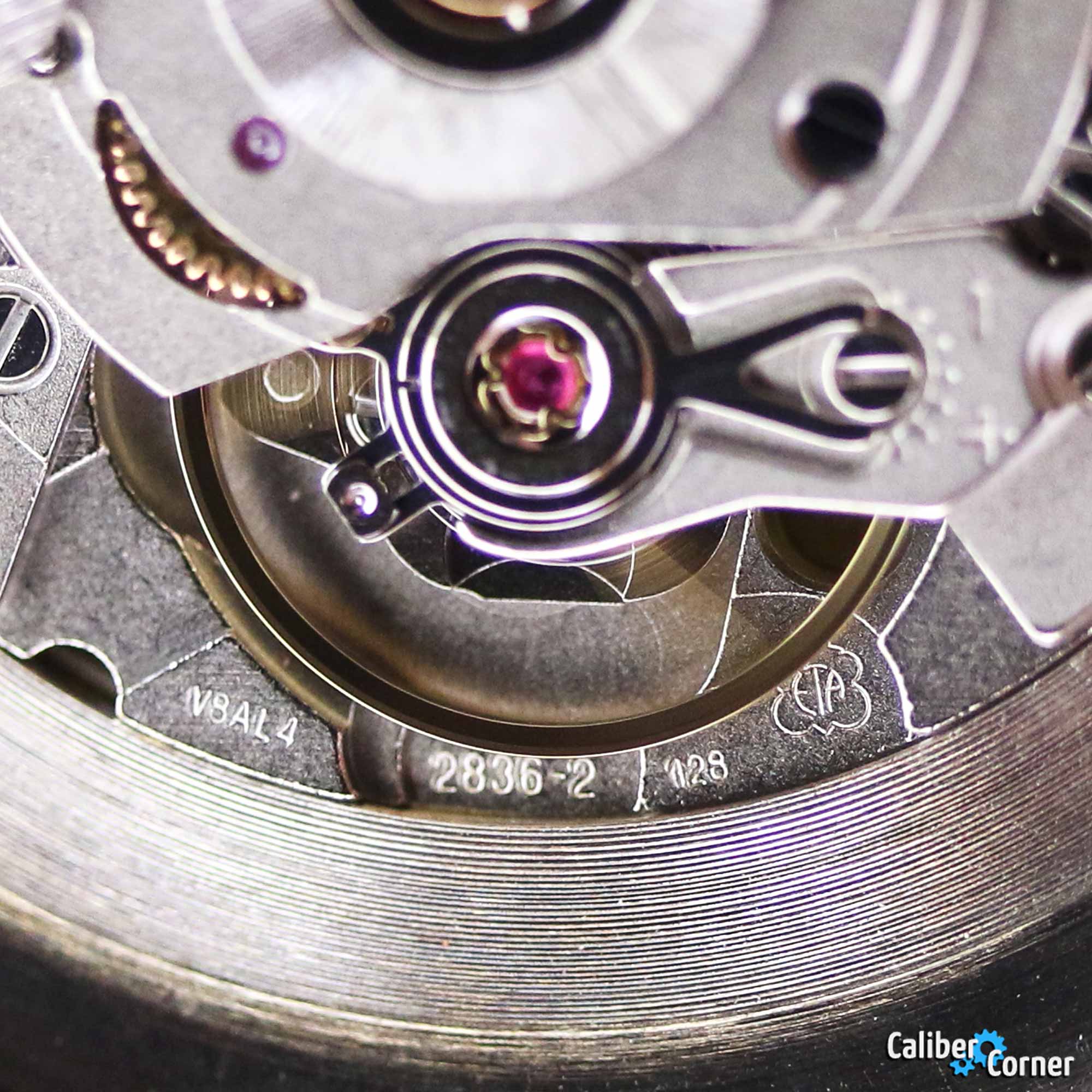 Below is a 2836-2 in a Tissot watch. It has Novodiac shock protection. 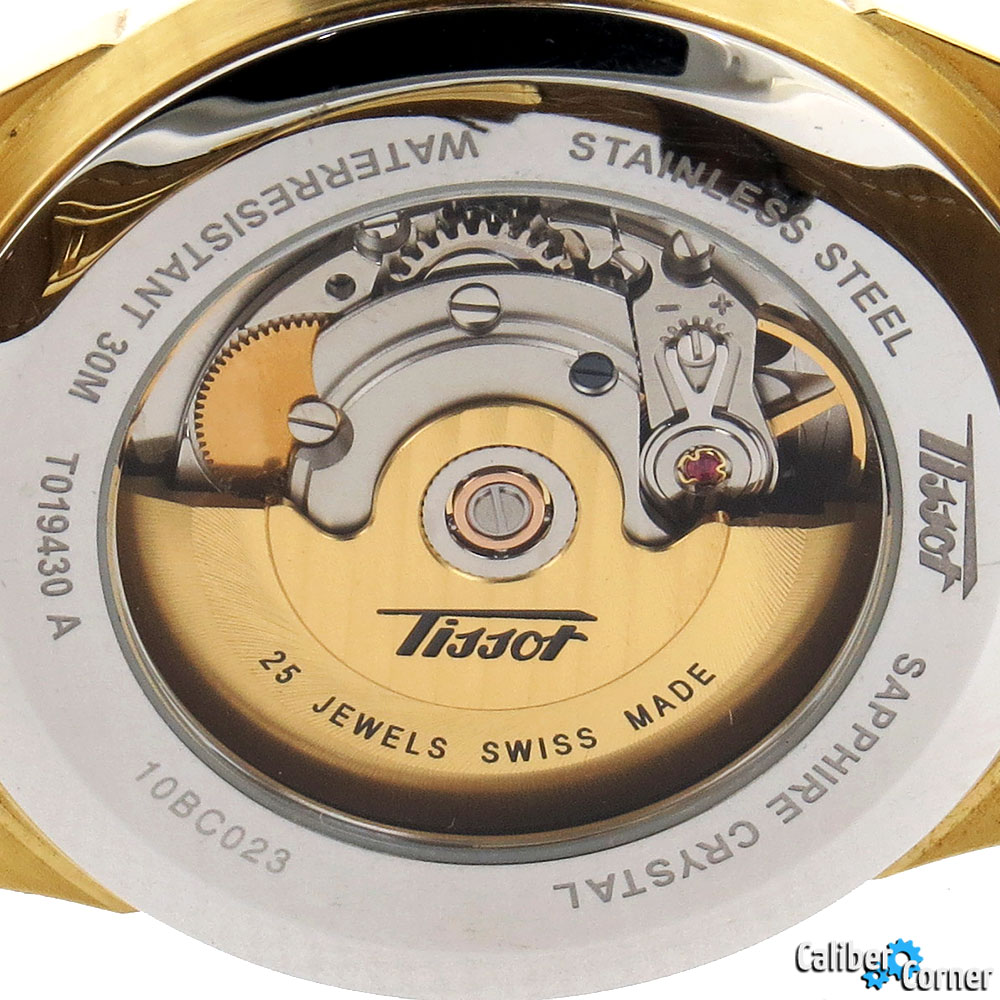 Pictured below is a 25 jewels COSC example of the ETA caliber 2836-2 found in a BALL Cleveland Express. 28,800 VPH, Incabloc shock absorber. 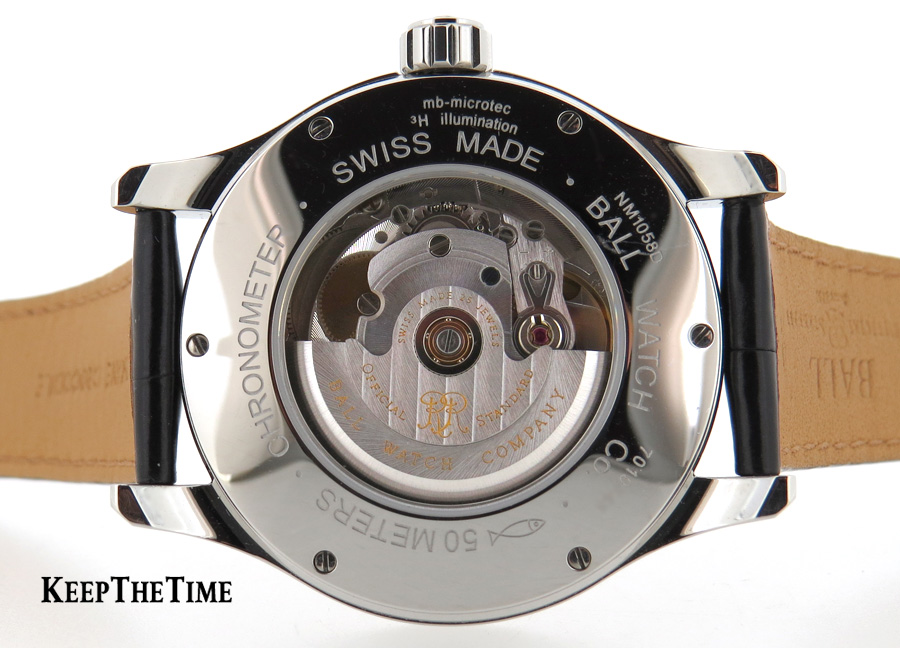 An ETA 2836-2 movement was also found in this Eterna KonTiki Four Hands with a pointer date aka date hand. Interestingly, there doesn’t appear to be any available documentation with regards to a 2836-2 with a pointer date, however, other brands have also offered this configuration (such as this Go 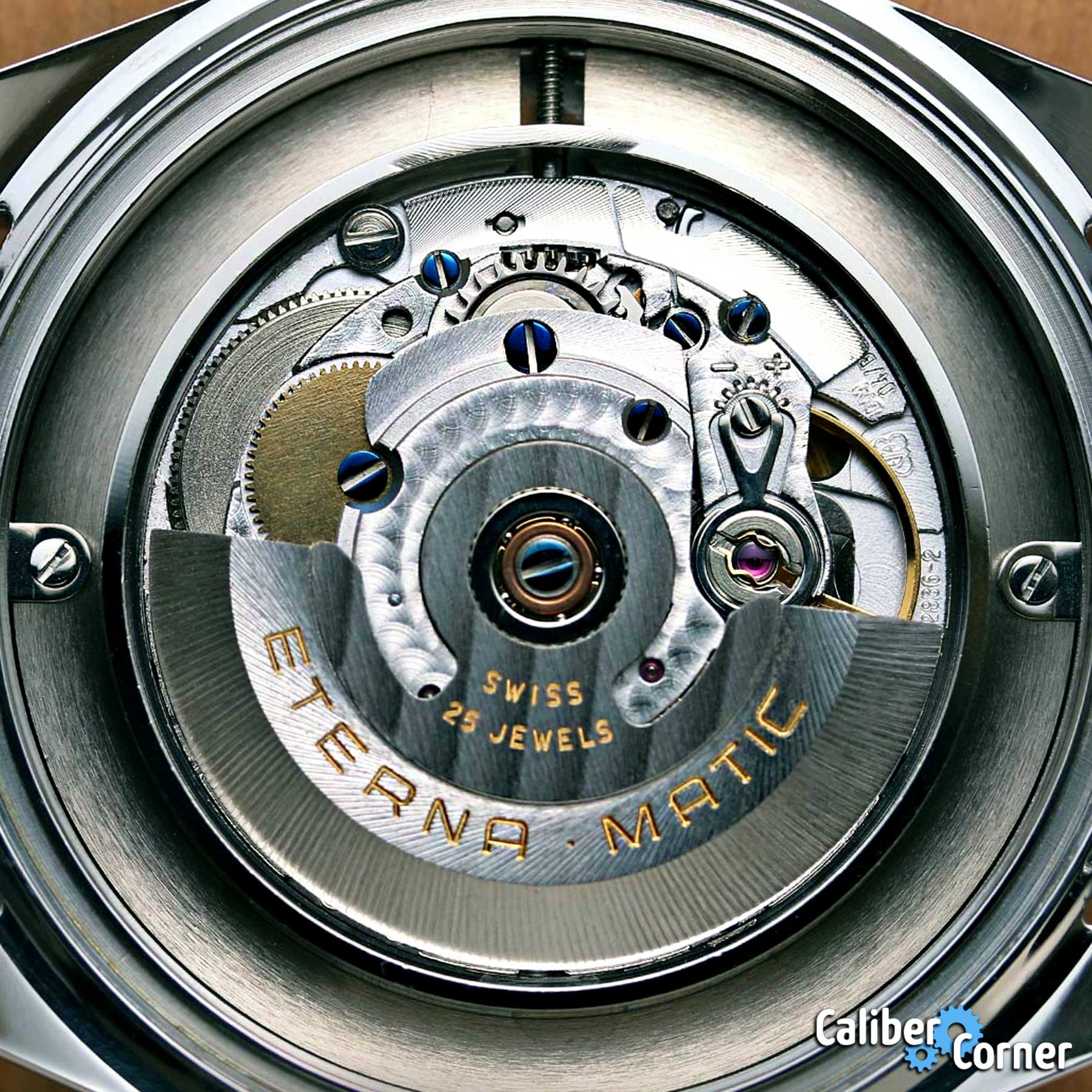