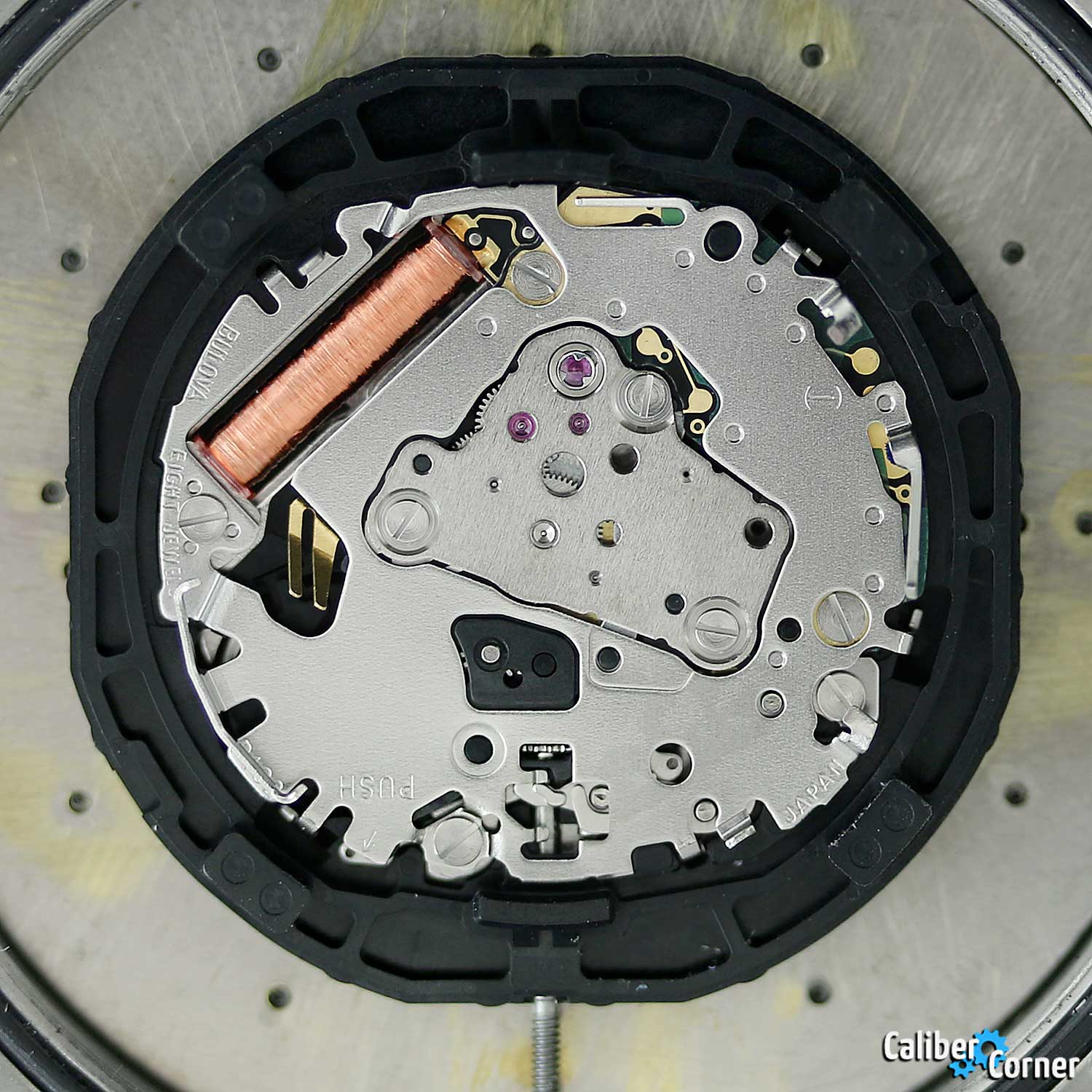 The Bulova caliber P102 is a high accuracy quartz (HAQ) movement with 8 jewels. It is considered to be one of the most accurate quartz movements in the world. Bulova is owned by Citizen and the P102 movement is made in Japan.

The innovative Precisionist crystal has three prongs, creating a torsional resonator – the prongs not only move back and forth, but twist. Standard quartz crystals have only two prongs.

Precisionist has the highest number of vibrations (262.144kHz) of any quartz watch. This unique construction generates 8 times more vibrations than traditional quartz. The result? A reduction in the effect of temperature variation and superior accuracy.

Bulova does not provide much information on the movements in their watches. They do not even officially list the caliber numbers on their website. There appear to be several variations of the Bulova caliber P102 including the P102.10 and the P102.12. Supposedly there is also a ladies watch version of this movement which is caliber P112.10, so perhaps people are just mixing them up. If you know anything about the differences between these variations, please share with the community in the comments below…

It takes a CR2016 size battery which is almost as big in diameter (20mm) as the movement itself (about 27mm). 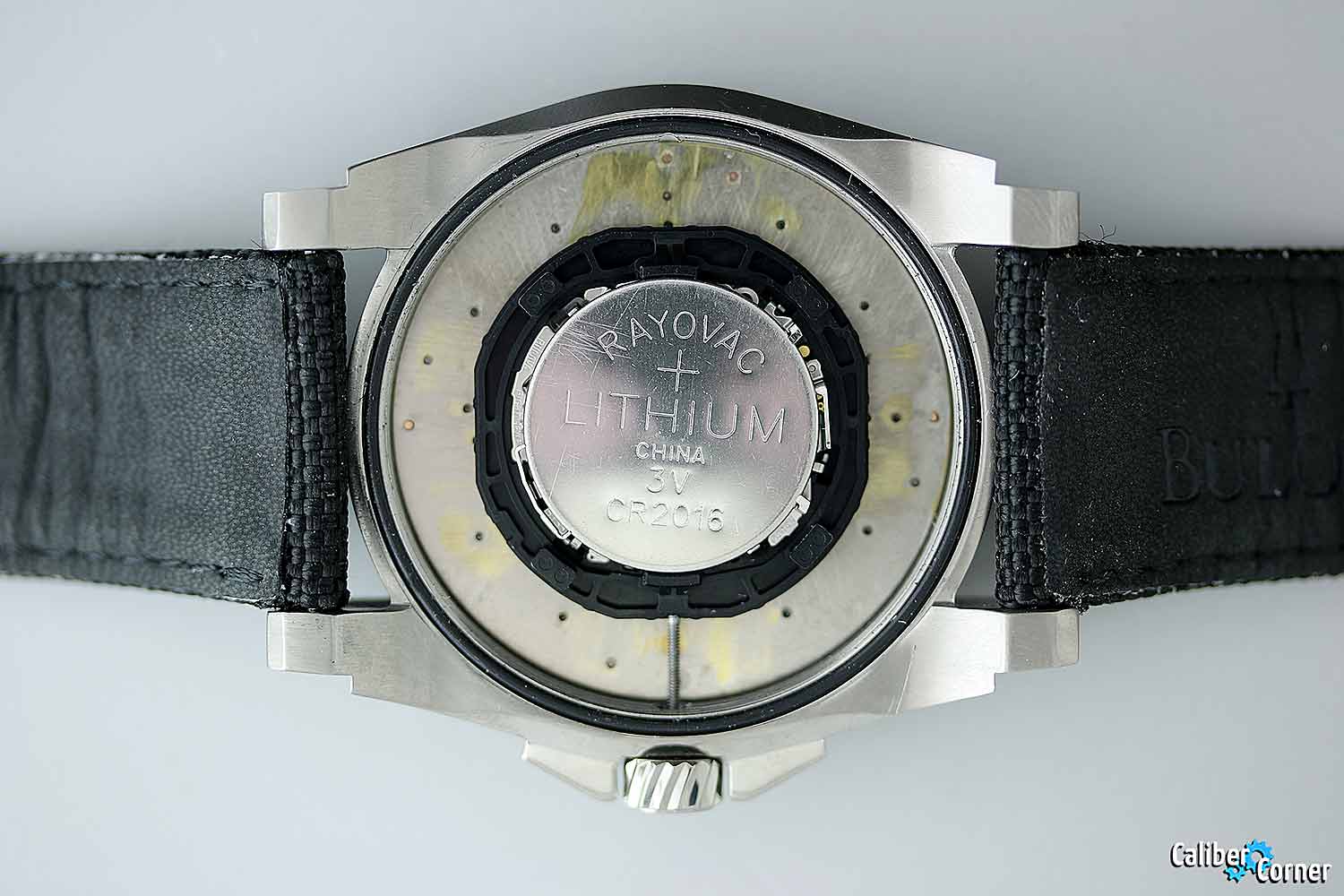 Bulova does not list an expected battery life for the Precisionist models with the caliber P102. Please add your battery life experience in the comments below…

There is often question as to whether the Bulova Precisionist caliber P102 movement is thermo-compensated or not. The confusion may have roots in Bulova marketing materials of the past where they mention thermo regulating. Recent marketing does not seem to talk much about this.

In this ad, Bulova claims that the Precisionist is the most accurate watch with a continuously sweeping second hand. The additional text may be hard to read, so here is what it says:

The key is Precisionist’s unique three-prong quartz crystal, which produces a vibration frequency of 262.144 kilohertz (kHz), eight times greater than the usual two-prong crystal and the highest of any watch available today. And, the innovative design of the Precisionist movement reduces the effects of temperature variation without using a high maintenance thermo-regulating integrated circuit.

The result is a watch that is extraordinarily precise, yet so easy to operate.” 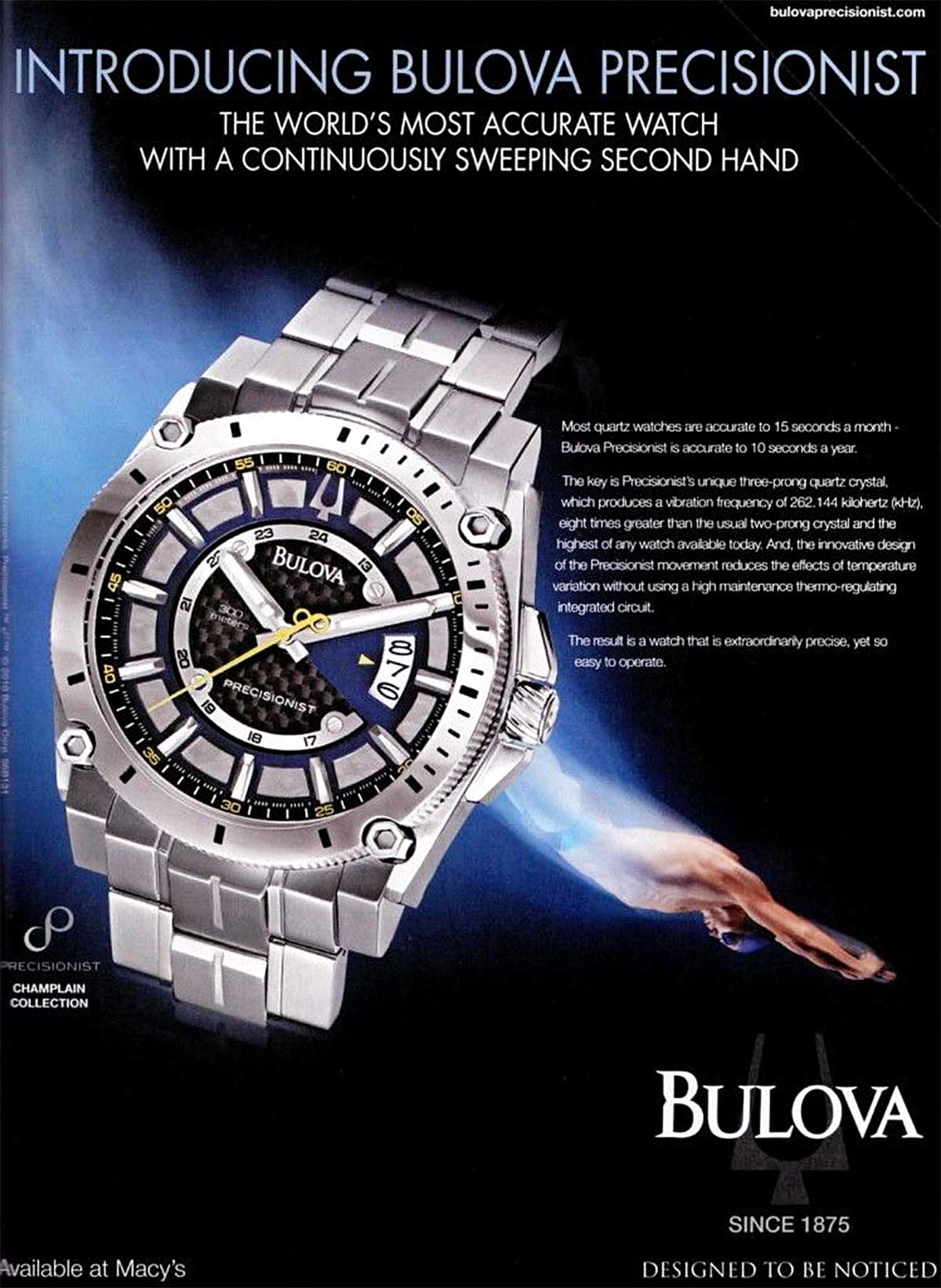 From Ricky Mac on Amazon:

Now, I won’t pretend to be Electronic Engineer enough to fully understand the nuts & bolts of it. I can say with confidence that the Caliber P102 is a 12 ligne (27mm) round movement with 8 jewels, and is marked “BULOVA / EIGHT JEWELS / JAPAN”. Beyond that, it’s my understanding (But don’t quote me, please) that Bulova achieved both the 16 Hz sweep and the ± 10 sec/year accuracy by the brute-force expedient of running a 262,144 Hz oscillator crystal. But even though this is eight times that of a normal quartz crystal’s 32,768 Hz, the sweep requires one further gimmick. Rather than being a 2-pole design like conventional crystals (in effect an A/B switch), the proprietary crystals add a third pole – effectively an A/B/C switch.

The downside of this is, of course, increased battery draw. The caliber P102 uses a 3.0V CR2016 Lithium coin cell and, while these can last up to 10 years in conventional movements, Bulova rates it at 2 or 3 years in this application. Depending on who you listen to. I’m actually not certain that Bulova has stated an Official battery life spec, but the 2-year figure seems to be a realistic expectation given other owner’s results.

Is it worth it? HECK yeah! At a glance, you can easily take the sweep as being truly step-less à la Seiko Spring Drive. If you look really close you can discern the 16 Hz steps, but you may have to use a loupe to do so. In any case, it’s mesmerizing to watch, and far, far smoother than any high-beat mechanical, even the 36,000 A/h über-mechanicals. When you consider that a watch with active illumination is also capable of burning through a CR2016 in a couple of years, it’s a more than acceptable trade-off, at least IMHO.

This model, as in all the men’s versions, uses the quartz Precisionist Bulova caliber P102.10 (12½ ligne) movement, which so far lives up to its accuracy publicity.

…Inside all the current Precisionist watches are the Japanese made Bulova caliber P102.12 or P112.10 quartz movements. As far as I know those are the only two Precisionist movements available right now. Bulova is owned by Citizen (Japanese) at this time, but used to be US owned. The movement offers three major desirable features. First and most importantly is the accuracy. The watch is accurate to about plus/minus 10 seconds a year. That is in comparison to about 15 seconds a month for standard quartz movements. It is also comparable to much higher-end Japanese and Swiss thermocompensated quartz movements. Second, the watch has a smooth sweeping seconds hand. It is smooth like the seconds hand on a Seiko Spring Drive, and more smooth that the seconds hand on most mechanical watches. Third, it has an acceptable battery life rated at between 2-3 years per power cell.

Sweeping away inside this Precisionist is the new Caliber P102.10 quartz movement.  I refer to this movement as HEQ (high-end quartz) for two reasons.  One being that the MSRP of this watch is $500 USD, which is a lot for a quartz watch.  Second, since this watch exhibits a greater degree of accuracy than typical quartz movements, it more or less earns HEQ status.  You could also refer to it as ‘high accuracy quartz.’

…In brief, Bulova’s design takes into account temperature changes and vibration frequency of the quartz movement by adding a third prong to the quartz crystal.  This design increases the total vibrations to eight times that of a standard quartz movement, with the Precisionist running at 242.144 Khz.  The result is the sweeping second hand that actually ticks 16 times per second, even higher than a mechanical movement’s 8 to 10 times per second.

Video of the Bulova caliber P102 and Smooth Sweeping Seconds:

Examples of Watches with the P102: