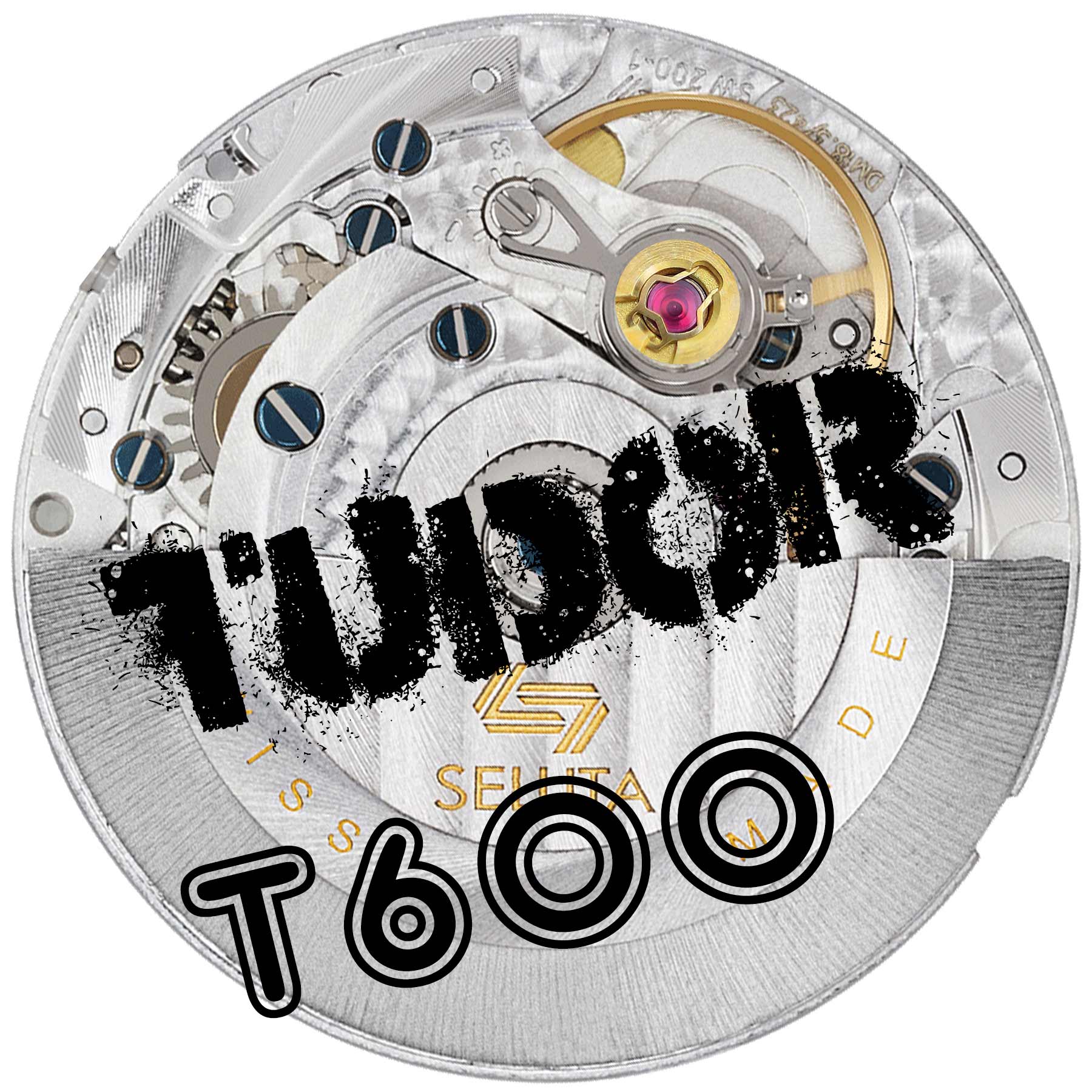 The Tudor caliber T600 is a Swiss made automatic movement with 25 or 26 jewels. This caliber is found in the 2021 family of Black Bay watches. Some watch publications are stating that the T600 is based on an ETA 2824-2. The rabbit hole goes much deeper than that…

There is a similar Tudor caliber T601. There are watch articles online stating that the difference between the caliber numbers T600 and T601 is that one is based on the ETA 2824-2 and the other is a Sellita SW200-1. This appears to be incorrect. In the current (2021) Tudor catalog, all of the T600 watches are no-date models, whereas the T601 watches have a date.

Nowhere in Tudor’s marketing information do they assert that the distinction between these calibers is the base movement used. We’re not sure where big watch media is getting their information.

We have an email out to Tudor for confirmation and will update this post if any clarity is provided. In the meantime, if you have a watch with a T600 movement and a date, please comment below. Please note that many watch sellers (including Tudor ADs) have no clue about the caliber numbers or which base movement is inside, so please only comment if you know for sure that your watch has the T600+date, and do not base it on what the salesperson told you or what the listing said.

Tudor used to refer to their ETA 2824-2 based movements as Tudor 2824. In 2020 the name changed to T600. Perhaps this was a way for them to deal with the fact they were starting to use Sellitas. If this is the reason behind the new naming convention, it would have been nice for Tudor to disclose the use of Sellita movements since many collectors expect their non-in-house movement Tudors to have an ETA inside.

So which one is it… ETA or Sellita?

Which one you get may be completely random. If true, this wouldn’t be the first time we’ve seen watch brands slap their own caliber number over a 2824-2 or clone and consider them one in the same (pro-info: they are not exactly one in the same as not all parts are completely interchangeable, but close enough). Why do brands pull this? Because it depends on the supply they are able to get their hands on, especially since ETA movements became unavailable in early 2020. If your T600 powered watch was manufactured before 2020, it likely has the ETA.

Editor’s Observations: One of the brands we’ve seen doing the rebranding of ETA or Sellita, luck-of-the-draw, box of chocolates movement games is Norqain. Tudor also happens to make Norqain’s “manufacture” movements. The apples don’t fall far from the tree!

What modifications made by Tudor?

The most obvious modification is the rotor, changed from stock to include Tudor branding. In the past, Tudor modified ETA movements with KIF anti-shock protection, which have been used by Rolex for years. Another modification Tudor has been known to make to the ETAs is changing the ETACHRON regulating device to a Triovis precision regulator. As for the Sellita versions of the T600, it is unconfirmed whether the same modifications are made. If you have a genuine Tudor powered by a Sellita based T600 and have access to opening it up, please post a picture in the comments.

Another modification would be for no-date models to have the calendar components removed (also referred to as a date delete) to avoid a phantom date when the crown is pulled out to set the time.

With either base movement, Tudor adjusts them to 5 positions.

Although Tudor does not write “Chronometer” across the dials of T600 powered watches, as written above, the Tudor marketing department describes the T600 as having “chronometer performance“.

So does “chronometer performance” means is it an officially certified chronometer or not? This sounds like they are claiming a chronometer-like timekeeping experience, without an actual chronometer certification to go along with it. If this is the case, it could be that they are using a Premium grade Sellita (or Top grade if it’s an ETA) which runs close to COSC spec but without the official certification.

For example, Sellita’s Premium grade is tested in 5 positions and tests out at an average of +/- 4 seconds per day with a maximum divergence of 15 seconds/day. For COSC, the movement must keep time within an average rate of -4/+6 seconds per day over the span of testing (at least 15 days).

Tudor themselves seem to be not so impressed by the T600. Case in point:

In 2021, Tudor announced the Black Bay 32/36/41. The numbers refer to the 3 sizes this model is available in. All three sizes are powered by the caliber T600. In the official 7 page marketing pdf (source), Tudor describes the T600 like this:

Interestingly, T600 is only mentioned twice in the entire marketing material – once for the quote above and once in the specs list. In contrast, the Black Bay Ceramic was released at the same time but mentions its so-called “Manufacture” caliber MT5602-1U a total of 6 times in 8 pages. One entire page is dedicated to the MT5602-1U with a picture of the movement. At the same time, not one single image of the T600 is to be found on the Tudor site (if you locate one, please share in the comments below).

Editor’s Observations: It appears that Tudor is being extra careful not to list too many specs for the T600 because that information could cause confusion or reveal that the T600 isn’t really one movement. Look at this Press Room page for the BB32/36/41. Notice how they don’t show an image of the movement or the caseback with a jewel count? That could be because the main surface level difference between the ETA 2824-2 and Sellita SW200-1 is that the ETA has 25 jewels and the Sellita has 26.

Watches powered by the Tudor caliber T600 movement are covered by a 5 year manufacturer’s warranty. Actually, Tudor calls it a “guarantee” rather than a warranty. Tudor clearly states that this guarantee is transferable, so when you purchase a pre-owned watch or sell your watch, it will still be covered within five years from the original date of purchase. Tudor also states that no registration is necessary for coverage, nor are periodic maintenance checks.

As of this post, the Tudor official site shows 36 model configurations with the T600 movement…

As you can probably sense from the inconsistencies revealed above, this caliber listing is in desperate need of some actual images of the T600 – ETA and Sellita based versions. If you have access to the inside of your watch or if you are a watchmaker with one on your bench, please submit images here.