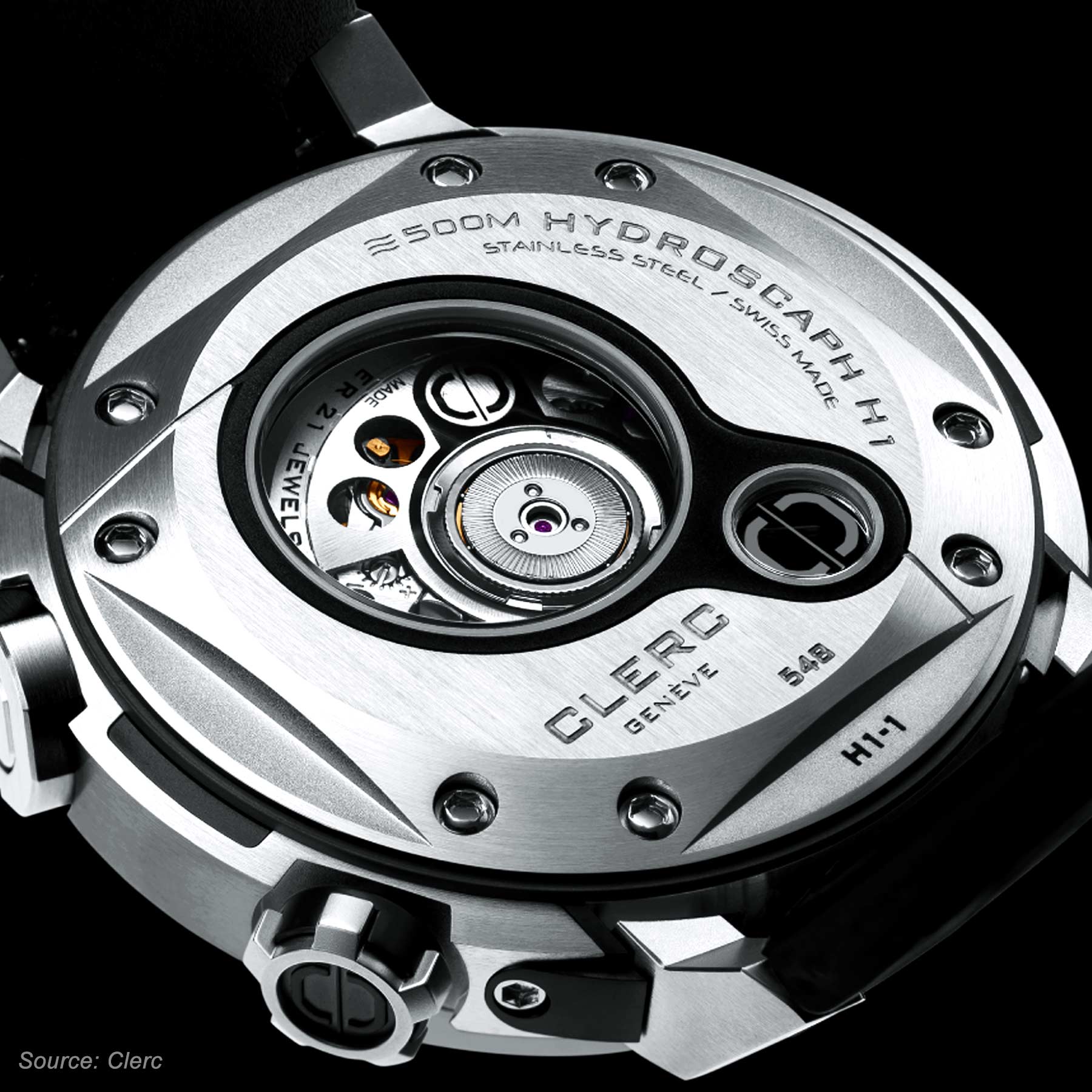 The Clerc calibre C609 is an 3-hands automatic movement with a date. It is a chronometer grade movement using the ETA caliber 2892-A2 as a base. Clerc is an independent watch brand.

Is the Clerc C609 an in-house movement?

“The exclusive CLERC Calibre C609 emerged victorious from its immersion into the merciless set of tests conducted by the Swiss Official Chronometer Testing Institute and can thus rightly claim to be a COSC-certified chronometer – the most prestigious pledge of precision and reliability. Beating at a high frequency of 4 Hz, meaning 28,800 vibrations per hour, the C609 movement is simple in terms of its functions–hours, minutes, seconds, date–backed by a 42-hour power reserve, while featuring a highly demanding level of finishing. These resolutely fine watchmaking finishes, along with the open-worked oscillating weight, have become a signature of CLERC movements.” –source

Despite the marketing pitch above positioning the C609 as being “exclusive” and making it sound as if it is an in-house movement, the Clerc calibre C609 is actually based on an ETA caliber 2892-A2 movement. ETA has various grades of movements, including a Chronometer grade. This means that it’s likely that Clerc simply orders a Chronometer grade movement from ETA, already certified by COSC, then changes the rotor  Whether or not Clerc has switched to an ETA clones in recent years and in light of ETA movements no longer being sold to non-Swatch Group brands is unconfirmed.

Then is it a Soprod or ETA?

Editor’s Note: Clerc’s website has frustrating inconsistencies, especially when considering the prices of their watches. On the same page, they should a drawing of a Hydroscaph movement with a rotor stating 25 jewels. Below that, there is a caseback image giving a glimpse of the movement within, reading 21 jewels (see pic above). These are watches retailing for $5,400 USD, we as watch consumers should expect more transparency about the movements they use – especially an accuracy representation of the jewel count. This is why Caliber Corner exists, to spread movement awareness 🙂

This drawing featured on Clercs site actually looks like a Soprod movement. Could this discrepancy be confirmation that the C609 is now powered by the Soprod caliber A10 or M100? The ETA 2892-A2 has 21 jewels, however, the Soprod A10/M100 (which are not exact clones but are considered to be interchangeable with the 2892) both have 25 jewels. If this observation is correct, it means that your C609 powered watch could have a Soprod or ETA movement depending on when it was manufactured. Again, it does not help that the brand is not clear on the true origins of their “exclusive” C609 movement.

Even with the drawing of what looks like a Soprod and 25 jewels written across the rotor, the individual product pages for the Hydroscaph H1 officially states 21 jewels. Does this mean it is possible that a consumer could purchase this model expecting to get a 21J watch but receiving a 25J watch? 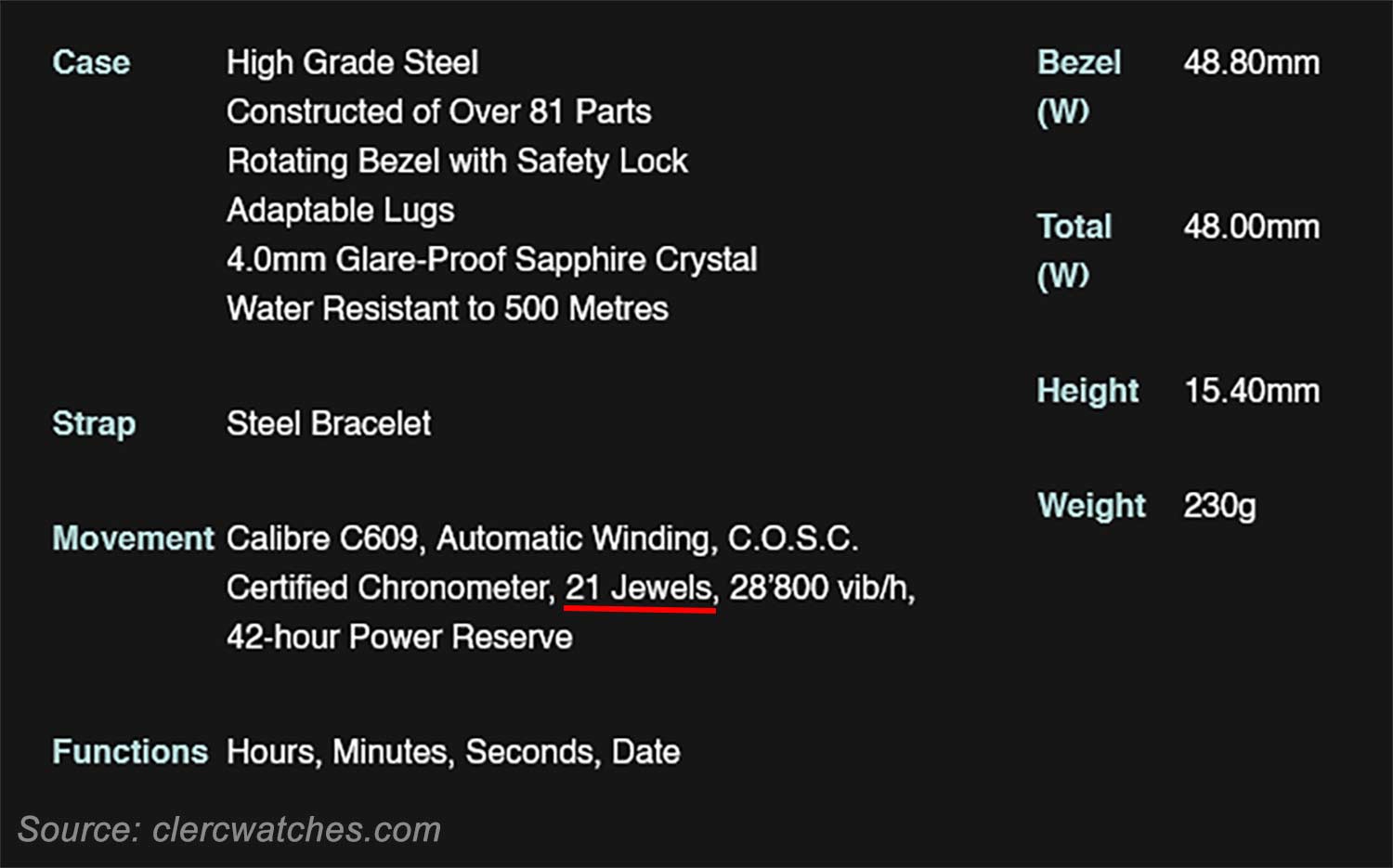 Please comment below if you have one of these watches with 21 or 25 jewels, a pic would be helpful as well.