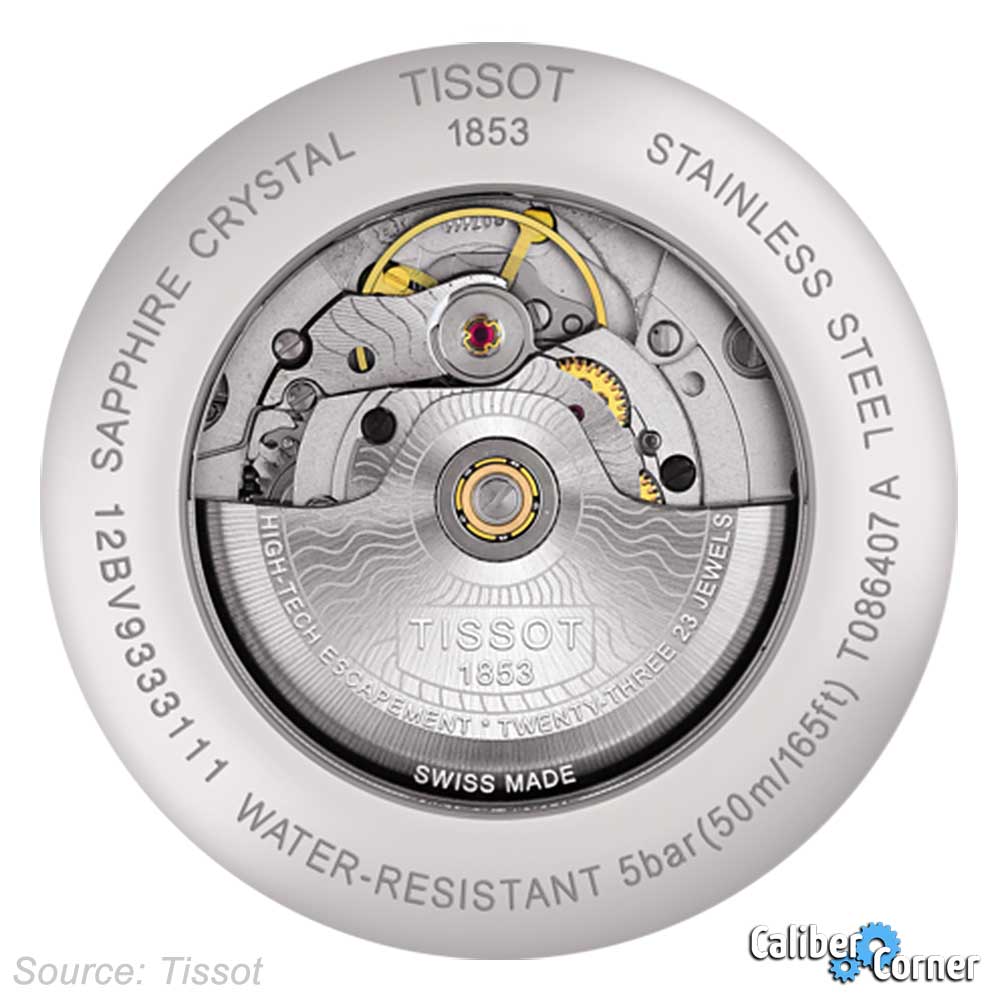 The Tissot Powermatic 80 is a Swiss Made self-winding automatic movement with 23-25 jewels. It is found in various Tissot models and is based on the ETA caliber C07 series, which itself is based on the legendary ETA caliber 2824-2. This caliber was announced at Baselworld 2012.

Tissot offers almost no information about the Powermatic 80 or the ETA base calibers. The official Tissot site provides large images of each movement, but they do a good job of hiding the ETA caliber designation near the balance wheel. The image above was one of the few available with a blurry glimpse at the base caliber number. Furthermore, ETA does not provide any official documentation on the C07 series, and these movements appear to be exclusive to Swatch Group brands only (as is currently the case for all ETA mechanical movements).

This caliber’s claim to fame is the high 80 hours power reserve. In contrast, the standard ETA 2824-2 is rated at about 38 hours power reserve when fully wound. Obtaining an 80 power reserve was achieved with the combination of a more efficient spring barrel and reducing the frequency from 4Hz to 3Hz. This means that the PM80 beats at 21,600 bph compared to a 2824-2 beating at 28,800.

The Powermatic 80 is not equipped with an ETAChron or other type of regulating system. Similar to the Sistem51, the Powermatic 80 laser regulated at the factory. This is what Tissot refers to as their “High-Tech” escapement. This doesn’t necessarily mean that the movement is impossible to adjust or service, but good luck finding parts or a watchmaker who will want to work on it. This is something for hardcore mechanical watch lovers to take into consideration before spending $1,000+ on a two-tone Tissot Luxury.

As mentioned above, the Tissot Powermatic 80 movements are based on the ETA caliber C07 series. At the time of this post, there are at least three variations of the C07 (C07.111, C07.611, C07.811) being used in Tissot timepieces labeled Powermatic 80, but Tissot does not give clear indication which models are powered by which version.

How to tell the difference?

An easy way to distinguish the difference between the base calibers in Tissot Powermatic 80 models is to look at the text on the rotor:

Note: the information in this section needs confirmed as we have also seen a 23 jewel PM80 that was a certified chronometer.

Ever since the release of the Powermatic 80, there has been speculation in the watch industry as to the materials they used to make it. Following the release of the Swatch caliber Sistem51, a movement made entirely of ARCAP, an alloy of copper, nickel and zinc, the Powermatic 80 is believed to be constructed (at least in part) from similar a material. If this is true, it would give the movement resistance against magnetism.

Furthering the resistance to magnetism is the use of silicon balance springs in some Tissot Powermatic 80 models. As mentioned above, movements containing the silicon balance spring will have it written on the rotor, but you can also find a Silicium logo (Si) near the balance wheel. Silicium is another word for silicon.

Hi, If you listen to watch snobs then your watch is junk. However, if you ...

Germany has it’s own certification, in Glashütte I believe. And yes, other watches may be ...

Hello Hoping someone can help with a quick question. Did 6139A come with day ring ...