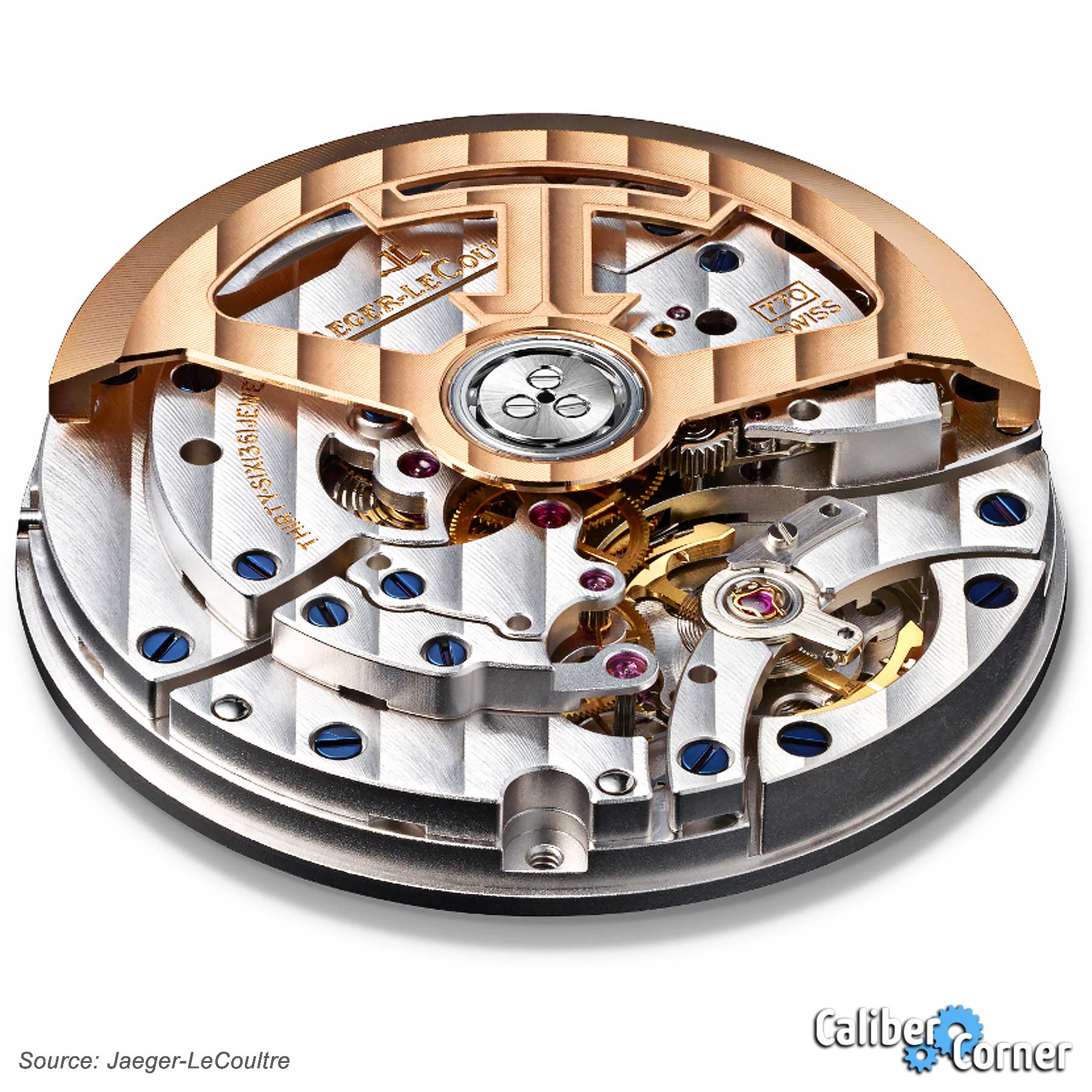 The Jaeger-LeCoultre caliber 770 is a Swiss made in-house automatic movement with 36 jewels, beating at 28,800vph. This caliber is found in JLC Geophysic True Second timepieces, with the notable feature of having a “dead” second complication (see below). When this model was first announced back September 30, 2015, the retail price was $9,050 USD.

The JLC caliber 770 is an automatic movement that beats like a quartz watch. Watches with this movement display the seconds as a one beat per second (1Hz) “ticking” motion rather than a sweeping motion. In other words, Instead of beating 6 or 8 times per second, the seconds hand on caliber 770 powered watches advances forward one full second to land on each marker on the dial.

While many watch enthusiasts cringe at the sight of a ticking seconds hand (impulsing is a more accurate descriptor), there is something alluring about the idea of a mechanical timepiece masking itself as a quartz, all by the means of engineering a complication to do so.

“This precision is also expressed by the true seconds system that causes the seconds hand to move forwards while “beating the second”, meaning by performing a jump every second. This is no ordinary feat for a mechanical movement, and one that does not disturb the smooth running of the watch. The true seconds mechanism involves an extremely sophisticated construction whose effectiveness is expressed on the dial by a pleasantly rhythmical reading of the seconds. This specific expertise, which has been mastered by Jaeger-LeCoultre since the 19th century, testifies to the authentic instrument-worthy nature of the Geophysic.” 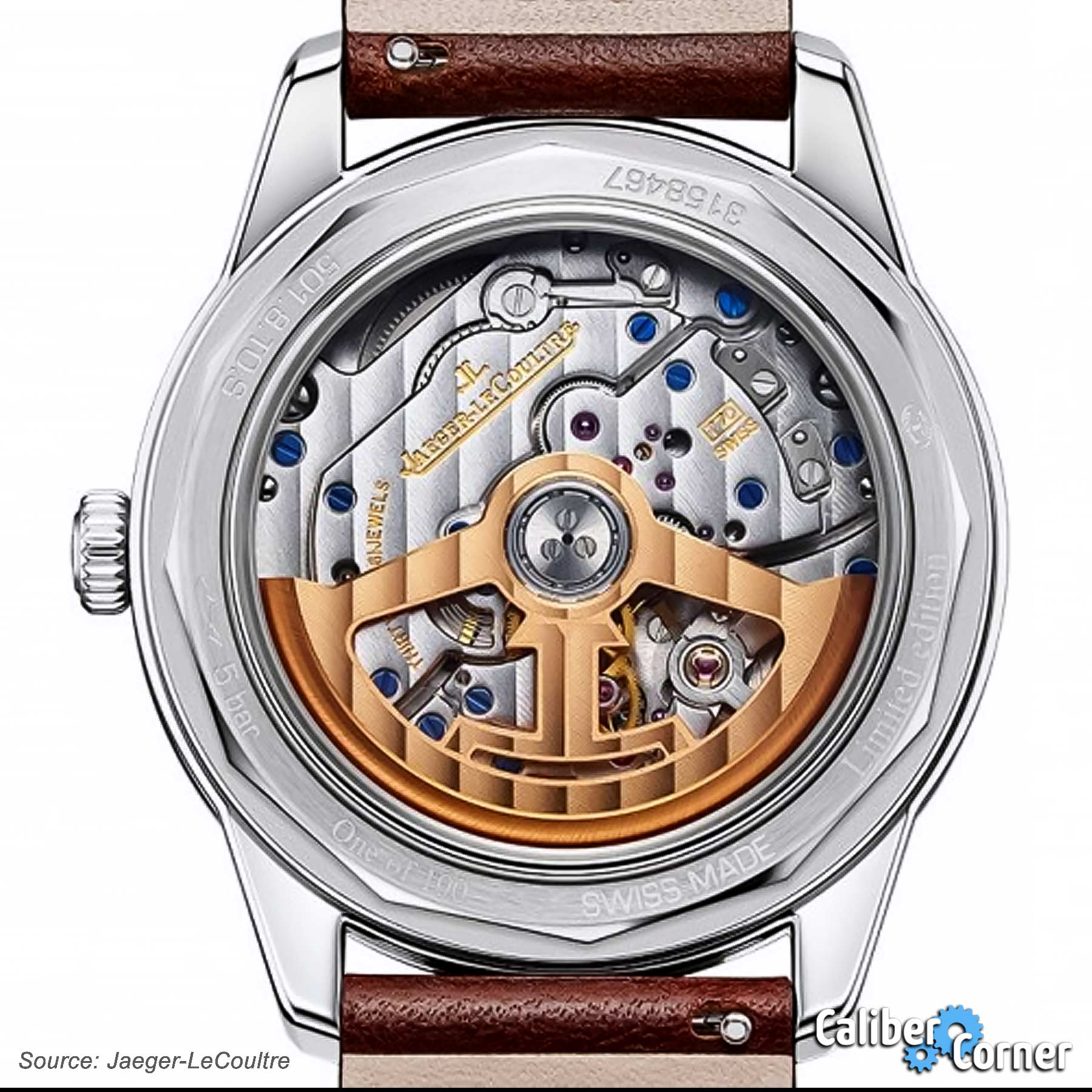 As seen with the caseback image above, the JLC 770 was also featured in the blue dial Geophysic True Second Limited Edition, which was announced on December 1, 2017. Here is what Jaeger-LeCoultre said about the movement in their official press-release for that model:

“The Geophysic True Second Limited Edition watch is fitted with an extremely accurate and aesthetically pleasing movement, the Jaeger-LeCoultre Calibre 770. It endows the watch with a True Second, a rare complication on an automatic calibre, that beats out the rhythm of every second. Its Gyrolab balance wheel of non-circular design replicates the Jaeger-LeCoultre anchor symbol, and demanded a great deal of research in how to reduce the effects of air friction. This ground-breaking innovation makes the watch significantly more accurate. Very practical for travellers, the jumping hour is set through the crown, without affecting the precision of the minute hand. The oscillating weight of this calibre is made of pink gold, and shaped like an anchor. With its sapphire crystal case-back, this watch offers an elegant view of its movement. Engraved around the perimeter are the words “limited edition – one of 100”. This is a true collector’s timepiece.” –source

No. While Jeager-LeCoultre may have come up with their own way to achieve jumping seconds, the concept itself dates back to the late 1700s. Other brands have had similar complications, including FP Journe, Arnold & Son, De Bethune, Gronefeld, etc. Rolex has even offered it with their Tru-Beat caliber 1040. Most recently, a similar display of the seconds can be found in the Habring² caliber A07.

Hacking? Yes, but not how you’re used to:

Another notable feature of the caliber 770 is the way it hacks, or stops the seconds hand for accurate setting of the time. On most hackable watches, the second hand stops when in time setting mode – time setting mode, of course, being when you can move the hand forwards and backwards to the desired time. On JLC 770 powered watches, the first click is for independently adjusting the hour hand. In this first click mode, the seconds will continue to “tick” across the dial. This allows for a quick update to the hours hand in the event of a time zone change or daylight savings time, while not needing to set the seconds again. Pulling the crown out another click to position 2 is where the hacking happens. In, this mode, the seconds stop and the minutes can be adjusted.

Editor’s Note: Just waiting for someone to complain that the seconds hand doesn’t hit precisely on the hash marks.