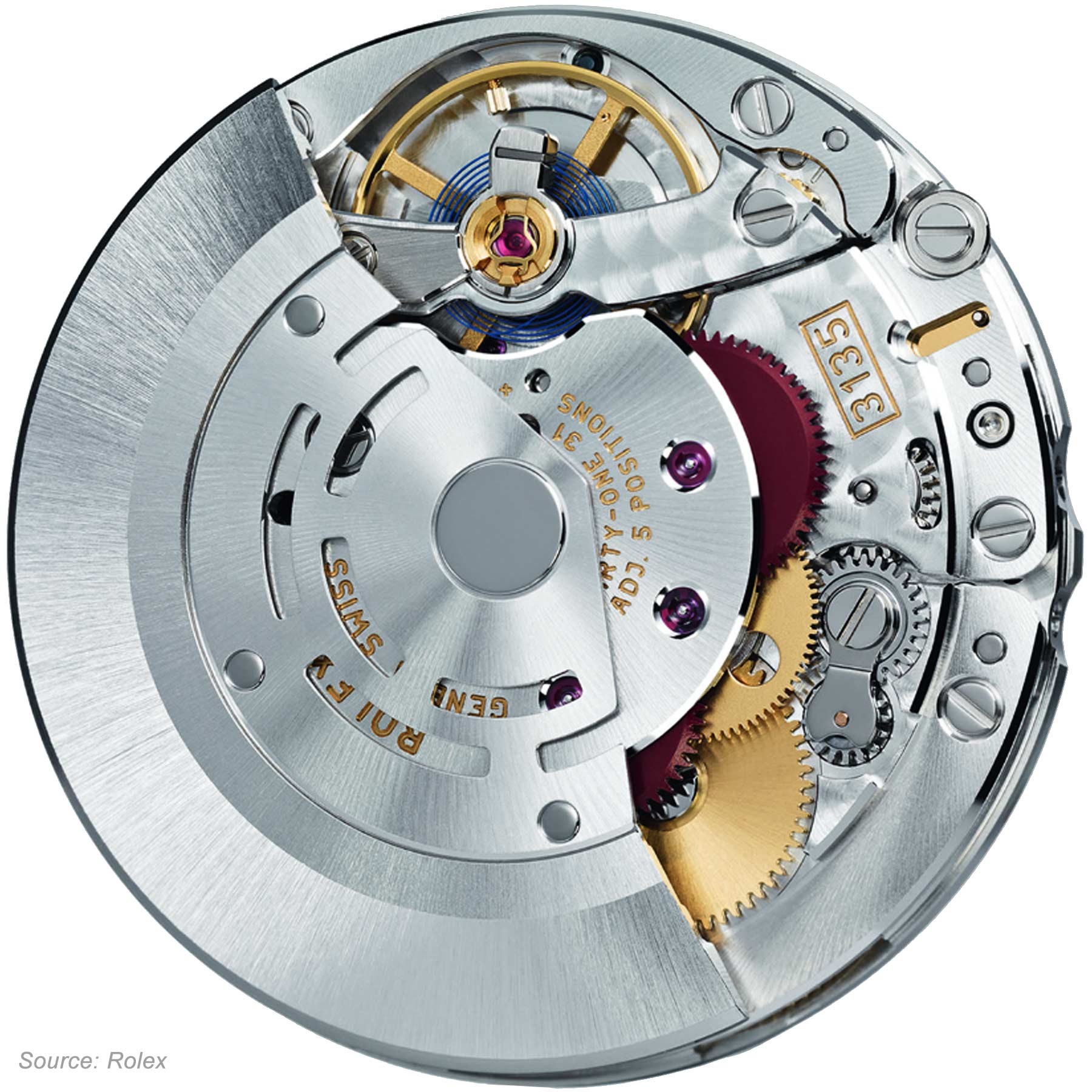 The Rolex caliber 3135 is an in-house automatic movement with 31 jewels. It is a Certified Chronometer (COSC) and is adjusted for five positions and temperature. It was originally announced in 1988, and has been used in many Rolex models since then. 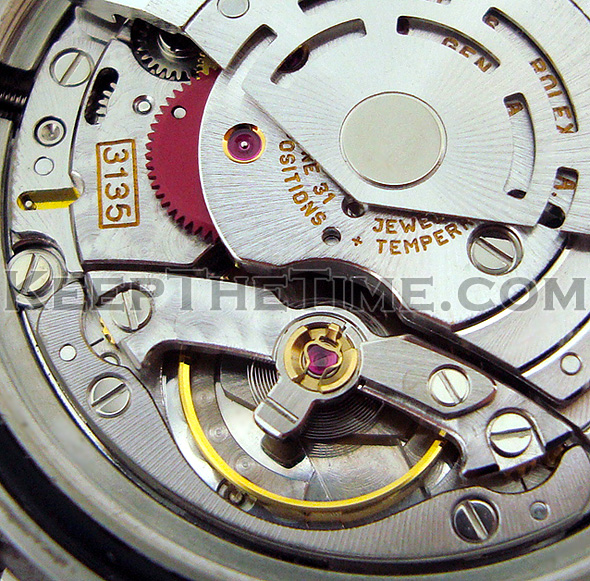 The calibre 3135 one of the most recognizable and widely known Rolex movements ever made. It is also a favorite amongst many technicians in the industry, including WOSTEP certified watchmakers.

The Rolex 3135 is a chronometer movement certified by COSC. This means that the average rate of accuracy falls between -4/+6 seconds per day. You will get better results from a fully wound watch.

There isn’t a +/- screw so how can you adjust or regulate the timing?

The regulator on the 3135 wasn’t designed for noobs. In order to adjust the timing nuts (there are two pairs of nuts/four in total, located on the inside of the balance wheel), you will want what is called a Microstella key (looks like this). This tool can be found online (the official part number is ref: 2019). Again, it is not recommended to do this without knowing what you’re doing – but then again, we all have to start somewhere. Just be sure to make the same adjustment on both Microstella nuts that are opposite each other to avoid unbalancing the balance! The range of adjustment is +/-150 seconds per day.

The 3135 has approximately 48 hour power reserve, however, some specs listings online have been known to incorrectly round this number up to 50 hours. If you have a watch powered by this movement, please comment below with your power reserve experience.

What are the red gears for?

The purplish red gears that make the 3135 and other Rolex calibers so recognizable reversing wheels (part# 32135-540).

The 3135 was found in several Rolex watches including the Submariner, Sea-Dweller, DSSD, Yacht-Master, Datejust, etc.

Note: Despite incorrect information on many sites, the Datejust II does not have a 3135 inside. DJII is powered by a larger version of the 3135 known as the caliber 3136.

The paramagnetic Parachrom Blue hairpspring started showing up in 3135 movements around 2007/2008 (Deepsea Sea-Dweller and ceramic bezel Submariners aka Sub C). As with all things Rolex, there is not a definitive date for this and it depends on the watch. If your watch was produced after 2011, it most likely has a Parachom Bleu hairspring inside. If you have more information about this, please comment below.

How can I tell if my watch has the Parachrom Blue spring?

You can’t really tell unless you open your watch or know based on what the AD or service center told you. A Parachrom Blue 3135 doesn’t act differently than a Nivarox (owned by SWATCH Group) 3135, it’s just more resistant to magnetism.

But I heard that X serial number watches from X year have the Parachrom Blue hairpspring?

Despite what you read online, there is not such thing as a definitive cutoff for anything Rolex related. It’s not uncommon for them to change things in the middle of a series with no warning or advertising. It depends on the watch. You have to open your watch to be sure.

I opened my watch and it doesn’t have the blue spring. Should I be depressed and trade it in at a loss to get one with a blue spring?

No. Enjoy your watch the way it is. There is no huge performance increase with the Parachrom Blue spring that would make it worth it to upgrade your watch. Also, there is a chance you could trade up and your new watch also doesn’t have it.

Does Rolex still use the caliber 3135?

After being the flagship movement of the Rolex line for almost 30 years, the brand finally made some changes to their core calibers and started phasing out the Cal. 3135 around 2015. Since then, watches began using calibers such as the 3235.

What was the last model to be produced with the 3135?

Submariner Date. But that doesn’t mean other models with the 3135 weren’t still being shipped to ADs late into the transition period.