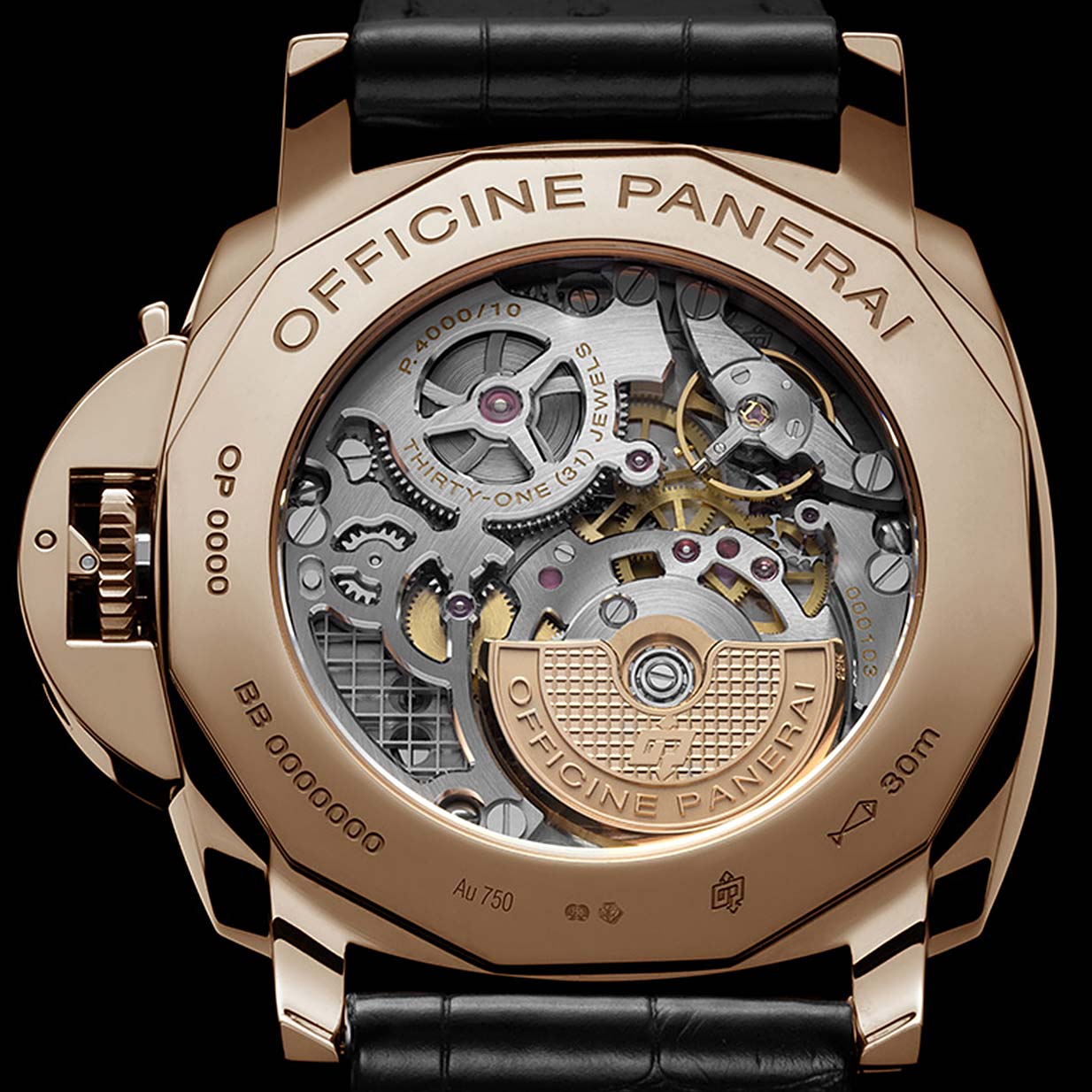 Panerai in-house automatic caliber P.4000. This movement has 31 jewels, carries a 3 day power reserve thanks to the two barrels, beats at 28,800, and has 203 components. Featuring a Glucydur balance and KIF anti-shock.

Officine Panerai presents the P.4000 calibre, the first automatic movement with an off-centre micro-rotor completely developed and made in the Panerai Manufacture at Neuchâtel. This design means that the rotor is mounted off-centre and is therefore smaller in diameter than the calibre itself: a sophisticated technical solution enabling the thickness of the movement to be substantially reduced. The small oscillating weight is inserted within the movement rather than superimposed upon it and the result is a calibre which preserves all the Panerai characteristics of accuracy, reliability and solidity but with a thickness of only 3.95 mm. With a diameter of 13¾ lignes (31 mm), the new calibre has a large bridge which is flanked by the small oscillating weight winding in both directions and the balance cock. The latter has twin supports, more secure and stronger than the customary overhanging balance cock with a single support. The supports have two screws for adjusting the vertical play of the balance staff. The balance wheel oscillates at 28,800 alternations per hour (equivalent to a frequency of 4 Hz). It is a balance wheel with variable inertia, that is, with screws enabling the rate to be adjusted precisely without altering the relationship of the balance spring and the bridge. Fitted with 31 jewels, the movement has a power reserve of at least three days, as a result of having two spring barrels connected in series. It is also fitted with the device which stops the balance wheel when the winding crown is pulled out, for synchronising the watch exactly. The P.4000 calibre is produced in two versions which differ in the kind of finish, the engraving and the material of the micro-rotor. The first, for models with a steel case, has bridges with a horizontally brushed finish, blue engraving and an oscillating weight of tungsten alloy, with relief decoration on the matt surface. The second version is for the models with a gold case and it has bridges with a circular brushed finish, gilded engraving and a rotor of 22 carat gold, with clous de Paris hobnail finish and polished decorations in relief on the brushed surface.