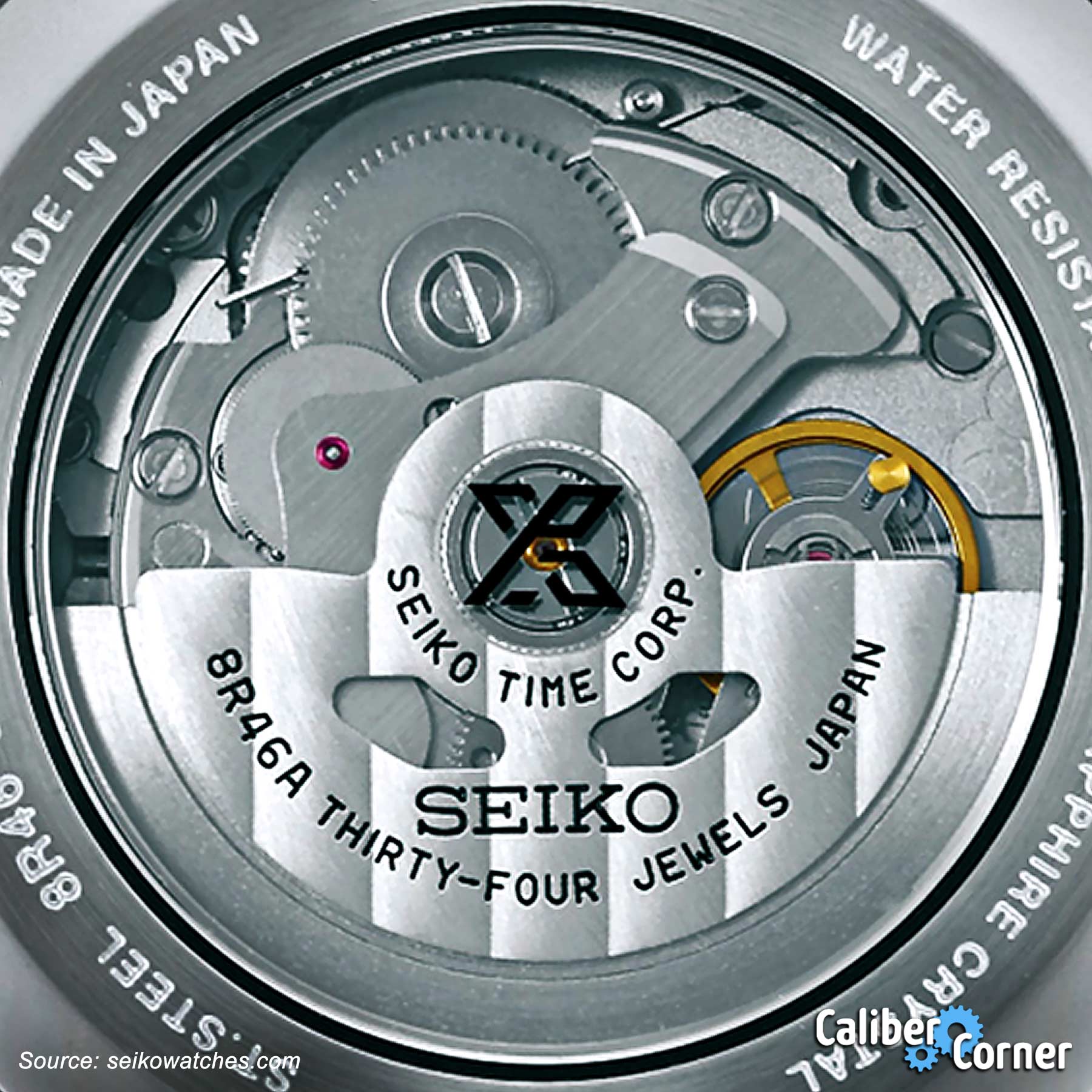 The Seiko caliber 8R46 is an automatic bi-compax chronograph movement with 34 jewels and beating at 28,800 vibrations per hour. This movement is made in Japan and is part of the 8R series, a family of movements that Seiko says is designed for maximum precision in every aspect. The 8R46 is only used by Seiko Watch Corp. in Seiko branded watches. As part of the 8R family, this movement features a vertical clutch and column wheel chronograph system for precise stopwatch control. This caliber is found in the Seiko Prospex Speedtimer line of watches that was originally announced on September 28, 2021 (press-release), then again with a new blue dial model on August 9, 2022 (press-release). 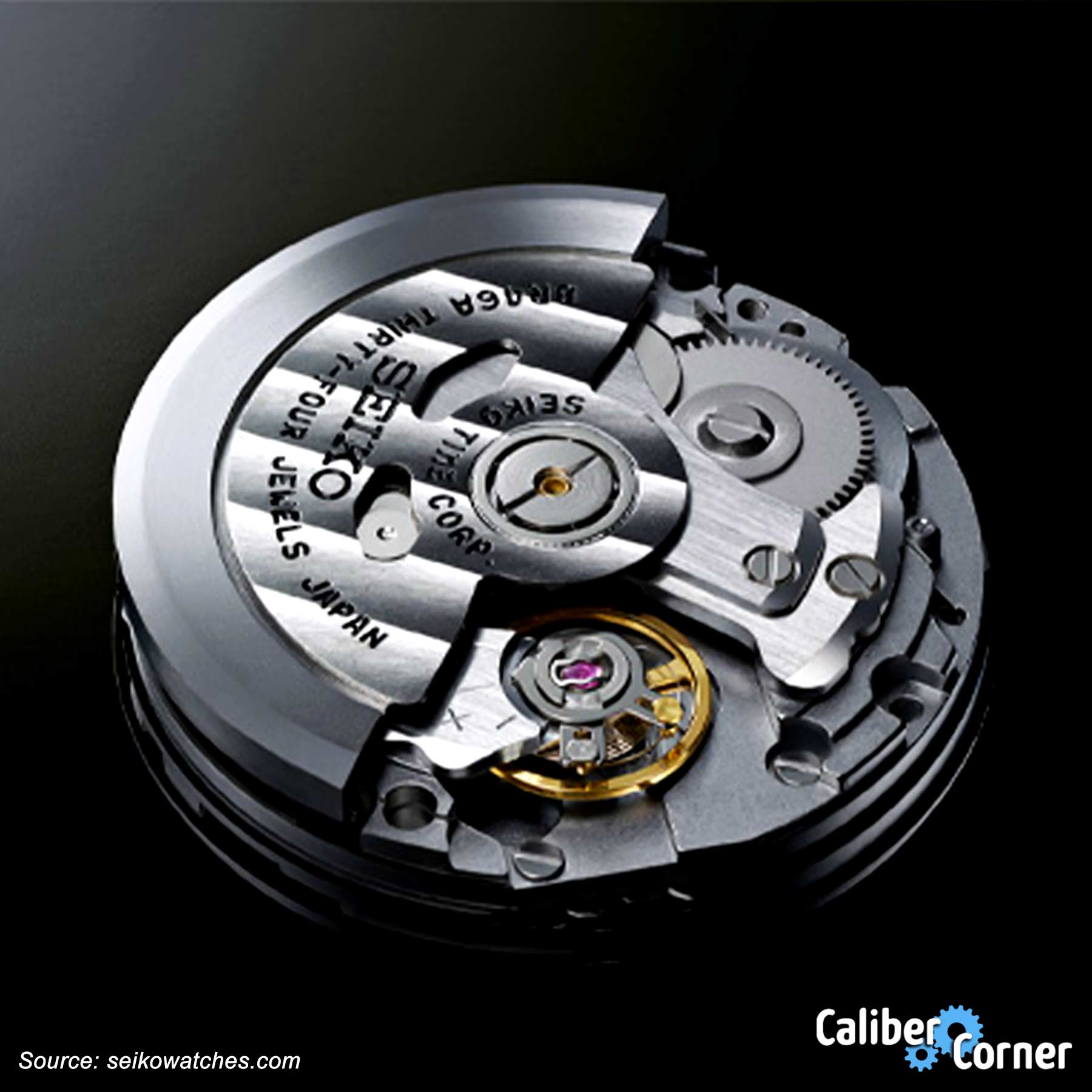 “This new Speedtimer is powered by Caliber 8R46, which incorporates both vertical clutch and column wheel mechanisms, just like the 1969 original. The vertical clutch eliminates any shuddering or jumping of the hands and so enhances the measurement accuracy while the column wheel ensures the precise control of the chronograph operation. In addition, the movement incorporates Seiko’s unique three-pointed hammer which ensures that, when the re-set pusher is depressed, the hands return to zero instantly and in perfect synchronization. The escapement is lightweight and strong, thanks to the use of MEMS technology which enhances the stability of the watch’s precision.” –source

There is a similar Seiko caliber 8R48 with two main differences: First, the 8R46 is a bi-compax chronograph, meaning it has two subdials, and the 8R48 is tri-compax with three subdials. The extra subdial is a 12 hour chronograph counter at 6:00. Second, the 8R46 has a date at 6:00 whereas 8R48 watches have a date at 4:30. Interesting note: caliber 8R46 shares the same instruction manual with 8R48.

As mentioned above, the 8R46 is a Seiko only watch movement. This means is not available for sale to other brands or for replacement purposes. However, since Seiko also has a division for supplying movements to the industry, the non-Seiko branded version of the 8R46 would be the SII/TMI caliber NE86. There are no major differences between these two calibers.

Aside from the big difference being that the Seiko 8R46 is an automatic and the Seagull ST19 is a manual-wind mechanical movement, from a distance the two calibers maybe be hard to tell apart. On the dial side, the 8R46 looks a lot like the popular Seagull ST-19 bi-compax chronograph being used by a number of new microbrands. From a strictly cosmetic and dial side observation, the main differences between the movements is that the subdials are placed in reverse order:

Another difference is that that Seiko has a date at 6:00.

8R46 is the base caliber number and the letter designates evolution or updates to the movement. In other words, the “A” in 8R46A indicates that it is the first generation of this caliber. If they change something in the movement later, it will be called a 8R46B. At the time of this post, only the 8R46A exists.

Seiko claims that the accuracy of calibre 8R46 is adjusted at the factory to keep the time between -15 to +25 seconds per day. This rating is based on normal daily wear on the wrist in temperatures between 5 ºC and 35 ºC. When testing your watch for timekeeping, make sure it is fully wound.

“Due to the characteristics of mechanical watches, any actual daily rate may not fall within the range of time accuracy specified above dependent on the conditions of use, such as the length of time during which the watch is worn on the wrist, temperature, arm movement, and whether the mainspring is wound up fully or not, etc.” -Seiko User Manual

When your 8R46 powered watch is fully wound, the power reserve is approximately 45 hours. When winding your watch, turn the crown clockwise slowly. Although the Seiko magic lever winding system is effective in getting power reserve built up in the mainspring quickly with a few shakes of the watch, Seiko recommends jump-starting a stopped watch by winding it 20 times before wearing it.

No, you cannot overwind the movement.

The 8R46 operates like a traditional chronograph watch with the functions operating in the following order: top, top, bottom.

DO NOT press these buttons in the wrong order, especially when the chronograph is running.

Since this is a caliber used in Seiko branded watches and not with this caliber number to other watch brands, the warranty on a brand new Seiko sold by a Seiko AD is 3 years. As per Seiko’s official recommended service intervals, they want 8R36 watches to be disassembled and cleaned by a Seiko service center once every 2 to 3 years “in order to maintain optimal performance of the watch for a long time.”

“The power transmission gear of the movement of this watch constantly receives force. To ensure that this mechanism works properly all the time, washing parts, changing oil, adjusting accuracy, checking functions and replacing consumable parts on a regular basis are important. The first overhaul after the purchase of your watch is particularly important for preserving long-time use of your watch. According to use conditions, the oil retaining condition of your watch mechanical parts may deteriorate, abrasion of the parts due to contamination of oil may advance or delay the time significantly, or the watch itself may stop.” -Seiko User Manual

Interestingly, despite Seiko stating that the first overhauls after the purchase of your watch is particularly important, right below that paragraph they also warn of the following: “When your watch is inspected and adjusted by disassembly and cleaning (overhauled), the movement of your watch may be replaced.” But… doesn’t this potentially cause a never-ending cycle? If they replace your movement on the first “important” overhaul, then it’s a new movement again, not a worked in serviced movement. Therefore, the first overhaul would be important again. *face palm*

The listed cost of servicing a 8R series caliber movement starts at $363.00 USD. If you have ever sent a watch to Seiko for service then you already know to expect additional hidden charges. It’s almost never going to cost exactly as listed.