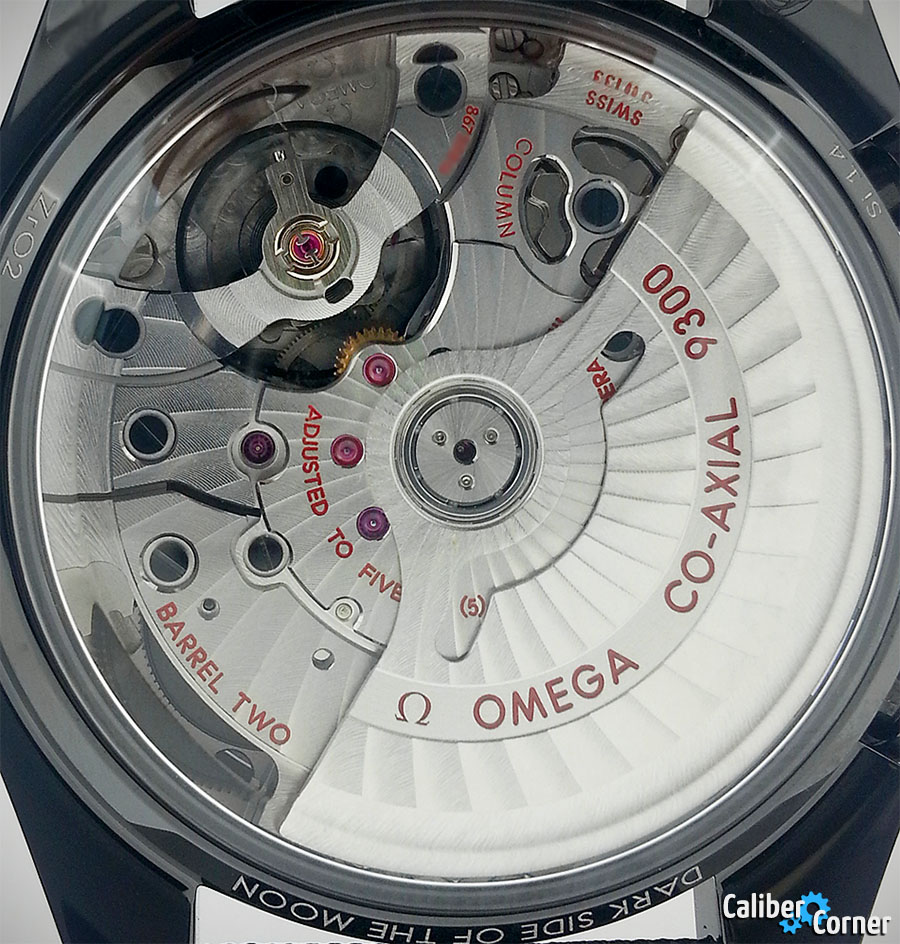 Omega’s in-house caliber 9300 equipped with Co-Axial Escapement for “greater precision, stability and durability” according to Omega documentation. The rotor winds in both directions to reduce winding time. Power reserve of 60 hours. Swiss made.

Other notable features of the 9300 are the co-axial escapement, silicon balance spring,  double barrels, column wheel and the ultra smooth vertical clutch system.

The picture above is of a caliber 9300 found in an Omega Speedmaster Dark Side of the Moon edition.

From the Omega site:

This questions reappears constantly in the watch community. Omega calls the 8500 and in-house movement, however, many enthusiasts are hesitant in giving this designation to the movement since the movements are apparently made by ETA with Omega (Co-Axial) designs and technology. But ask yourself this, if the conglomerate Swatch Group owns Omega and also owns ETA, does that mean any proprietary movements made by ETA for Omega could be considered “in-house” since they basically live under the same roof (Swatch)?

Europa Star published this article that mentioned Omegas plans to open a new facility next to their head office, but at the time were producing the caliber 9300 in ETA’s factories…

…Until this ambitious new project is completed in the summer of 2015, however, some 500,000 Omega co-axial movements are produced for the brand on assembly lines at various facilities of the Swatch Group’s ETA division. Europa Star had the opportunity to visit the dedicated assembly line for the most recent of these co-axial movements, the Calibre 9300 co-axial chronograph at one of ETA’s six factories in its home town of Grenchen, a 15-minute drive from the Omega headquarters in Biel.