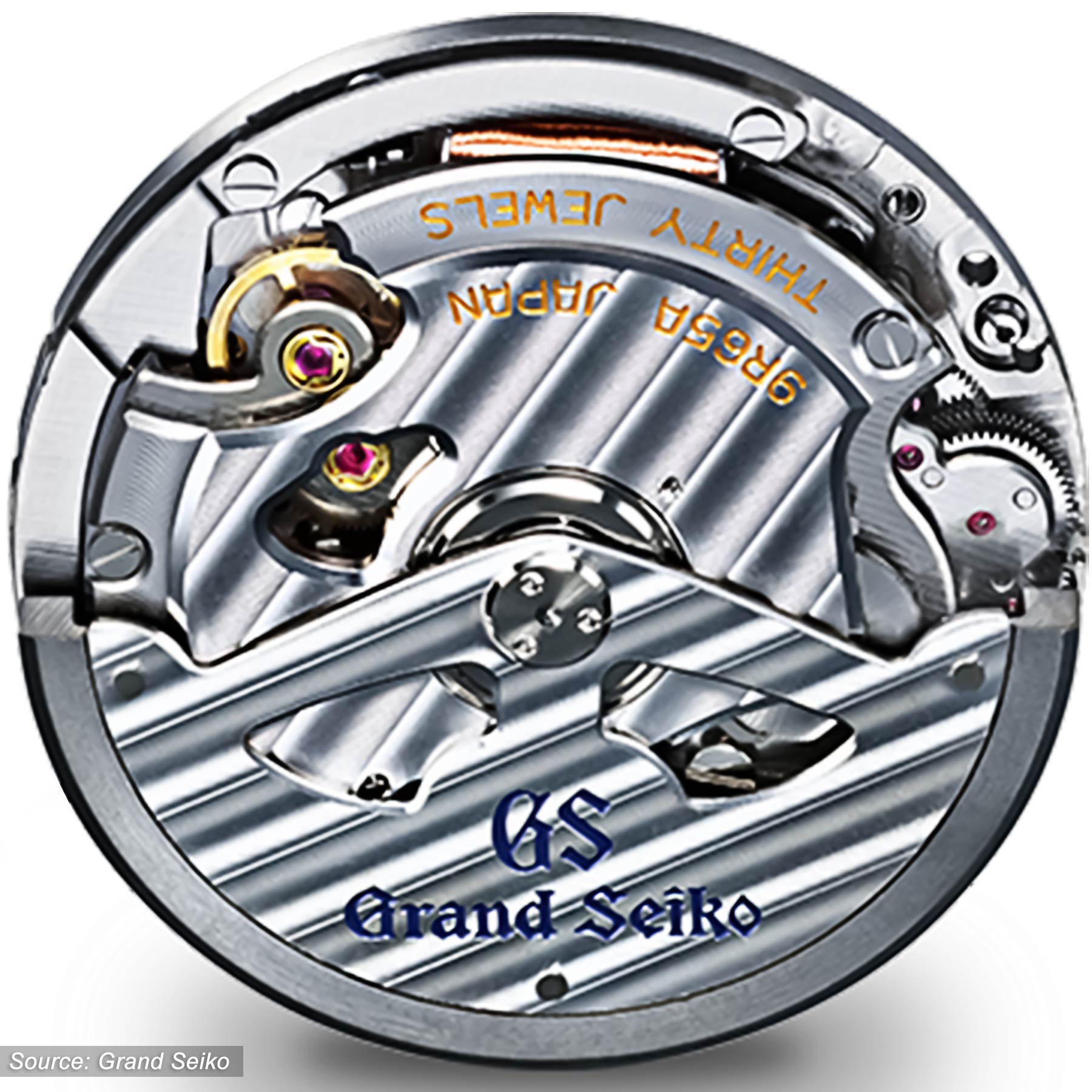 The Grand Seiko caliber 9R65 is a Spring Drive movement that GS officially refers to as “Automatic Spring Drive 3 Day”. This caliber is found in various Grand Seiko dress watches (such as the new Four Seasons series with snowflake dials) as well as Grand Seiko dive watch line. Seiko states that the 9R65 is the “most standard” of the 9R family of SD movements.

There is a similar caliber 9R15. Both movements are Spring Drive and both have the same functionality. One difference between the two is the claimed accuracy: the 9R65 is rated at +/-15 seconds per month and the 9R15 is rated at +/-10 sec/month. Grand Seiko addresses this discrepancy with the following explanation:

“The difference between the two movements lies in the quartz crystal oscillator, which delivers accurate electrical signals.” –source

There is also a notable cosmetic difference between the 9R65 compared to the 9R15, specifically on the rotor. On the caliber 9R15 you will find a solid 18K gold coin-like emblem embedded into the rotor. The design contains the Grand Seiko lion logo, which serves the purpose of indicating the “enhanced accuracy” offered by the 9R15. The 9R65 being discussed here has a plain rotor with blue GS Grand Seiko text. The 9R15 also has a more decorated finishing compared to the 9R65. 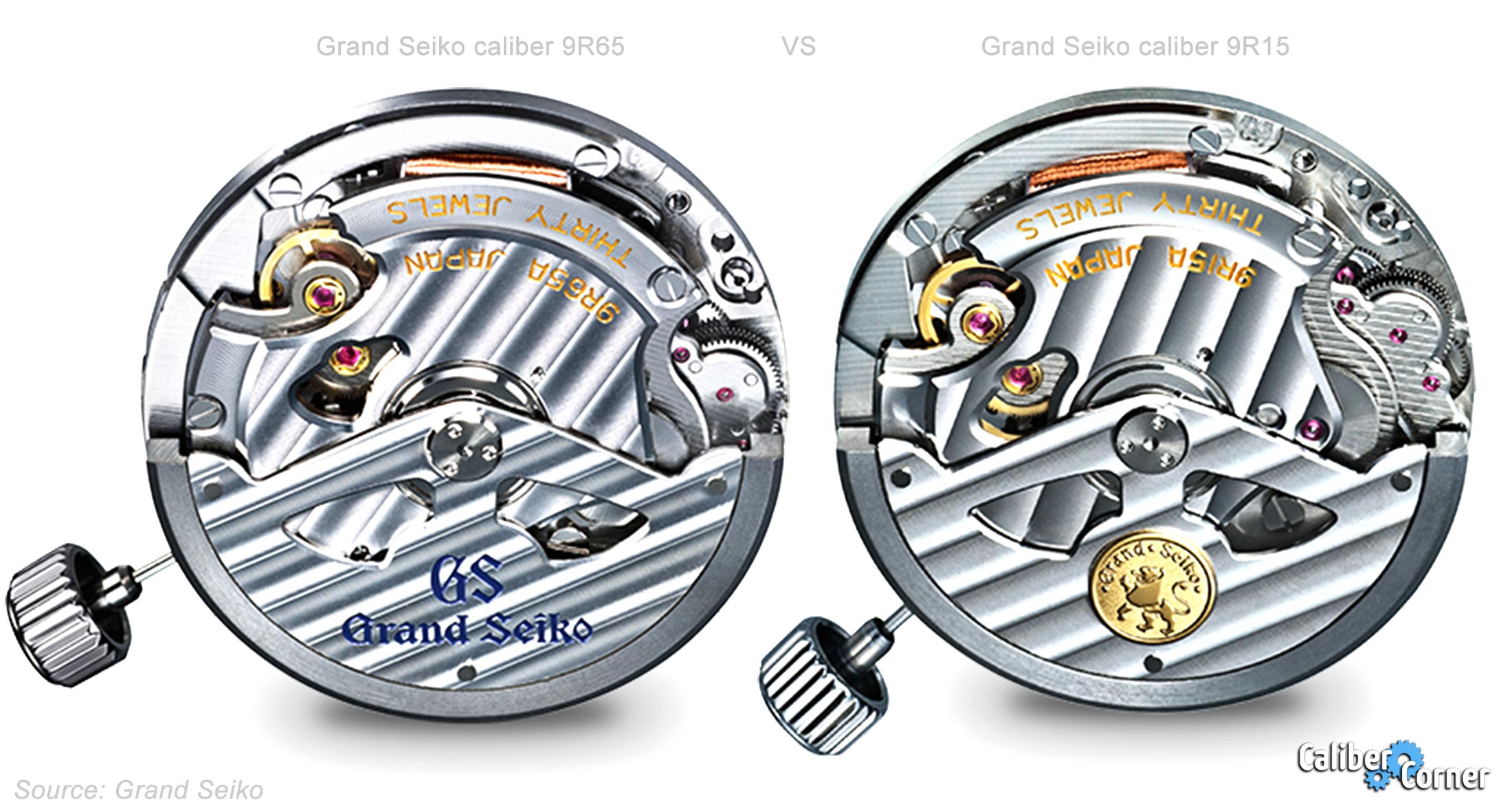 Caliber Commentary: It’s sometimes baffling the way these watch brands come up with their caliber designations. One would think the 9R15 was the less accurate model, superseded by the 9R65… but it is in reverse.

Within the first few pages of the Grand Seiko manual which covers multiple Spring Drive calibers, Seiko’s elevator pitch for the movement technology is: “Taste of a Mechanical Watch ＋ High accuracy equivalent to a Quartz Watch, that is the concept of the Spring Drive.”

Although Seiko introduced Spring Drive at Baselworld 1998, they were working on it since at least 1978 when they filed an initial patent for the technology. The Grand Seiko 9R65 wasn’t officially launched until 2004.

“Our company unveiled Spring Drive in 1999, but its lack of a sufficiently effective automatic winding mechanism and 72-hour power reserve prevent its adoption in the Grand Seiko line. After a further four years of development, the first Grand Seiko 9R Spring Drive was created. The winding system and drive time were improved from the existing 48-hour manual winding system to an automatic 72-hour power reserve. The automatic winding mechanism uses Seiko’s original Magic Lever mechanism developed in 1959, but with improved productivity, maintainability, and durability to enhance winding efficiency.” –source

The general caliber number is 9R65, with 9R65A being the first version. The subsequent letter variations indicate evolution in the movements development. As of this post, there is only a caliber 9R65A (which is the same as 9R65).

Seiko officially claims the accuracy of the caliber 9R65 has an average monthly rate of +/-15 seconds per month in normal temperature conditions (between 10 – 60 degrees C). This works out to be a rate of about +/- 1 second per day.

The caliber 9R65 holds a power reserve of at least 72 hours/3 days. According to Seiko, it only takes five full rotations of the crown to power the watch to run for about 10 hours. The crown winding direction is clockwise, or forwards. Winding backwards or counterclockwise will do nothing. It is recommended that when winding the crown, the rotations are made slowly.

Wearing the 9R65 powered watch for 12 hours/day over the span of 3-5 days will get the movement to full power reserve.

According to official documentation, to avoid damaging your watch movement, do not adjust the date between 9:00 PM and 1:00 AM.

How often does the 9R65 need serviced?

According to official Seiko documentation, watches with the caliber 9R65 should be overhauled every 2-3 years. Learn all about Seiko service intervals here. At the time of this post, the starting cost of getting this movement services by Seiko is $570.00 USD.

“Periodic inspection and adjustment by disassembly and cleaning (overhaul) is recommended approximately once every 3 to 4 years in order to maintain optimal performance of the watch for a long time.” –source (Grand Seiko instruction manual)

“The movement of this watch has a structure that consistent pressure is applied on its power-transmitting wheels. To ensure these parts work together properly, periodic inspection including cleaning of parts and movement, oiling, adjustment of accuracy, functional check and replacement of worn parts is needed. Inspection and adjustment by disassembly and cleaning (overhaul) within 3 to 4 years from the date of purchase is highly recommended for long-time use of your watch. According to use conditions, the oil retaining condition of your watch mechanical parts may deteriorate, abrasion of the parts may occur due to contamination of oil, which may ultimately lead the watch to stop. As the parts such as the gasket may deteriorate, water-resistant performance may be impaired due to intrusion of perspiration and moisture. Please contact the retailer from whom the watch was purchased for inspection and adjustment by disassembly and cleaning (overhaul). For replacement of parts, please specify “GRAND SEIKO GENUINE PARTS”. When asking for inspection and adjustment by disassembly and cleaning (overhaul), make sure that the gasket and push pin are also replaced with new ones.” -same source as above

Replacement prices for the Grand Seiko 9R65A are not available because the movement is not available for individual sale. If you have an issue with your 9R65 powered watch, you should first consider taking it/sending it in to a Grand Seiko authorized repair center. During an overhaul, GS may replace the movement at their discretion. If you do not want to have GS service your timepiece, the only way to get parts for repair may be to purchase a used watch on the secondary market.

Examples of watches with the 9R65: