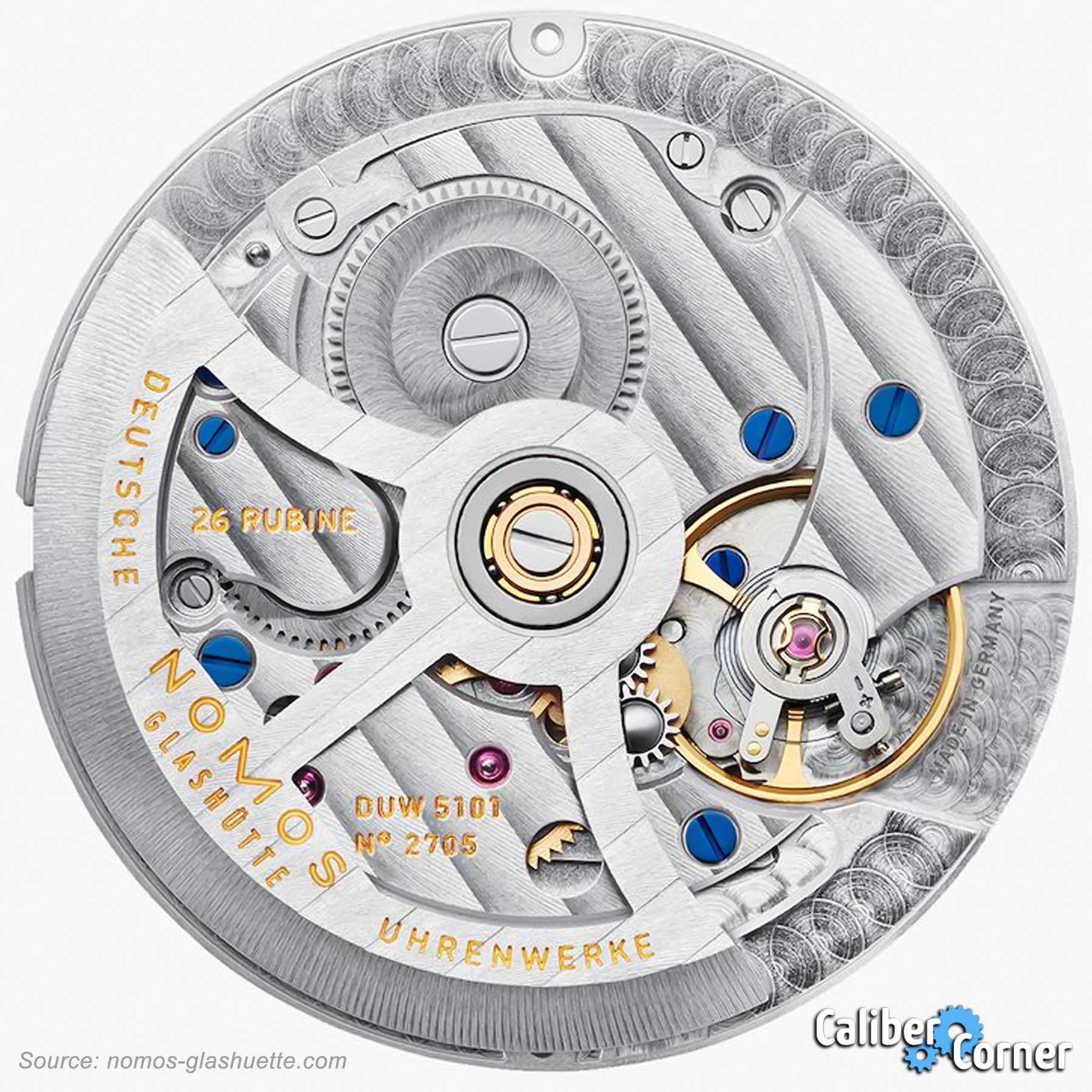 The NOMOS Glashutte caliber DUW 5101 is an in-house automatic watch movement with 26 jewels, made in Germany. The DUW 5101 was announced in 2017 is a current caliber being used in the NOMOS catalog as of 2022. The design and functionality of this caliber is based on its predecessor: NOMOS Zeta (ζ).

In the brand’s own words:

“A reliable pacesetter for the larger automatic watches with a date function from NOMOS Glashütte, highly praised for its outstanding winding rate: DUW 5101 stands for excellent accuracy, a great deal of craftsmanship, Glashütte heritage—and a dash of independence. Since the pace is set by the renowned NOMOS swing system.” –source 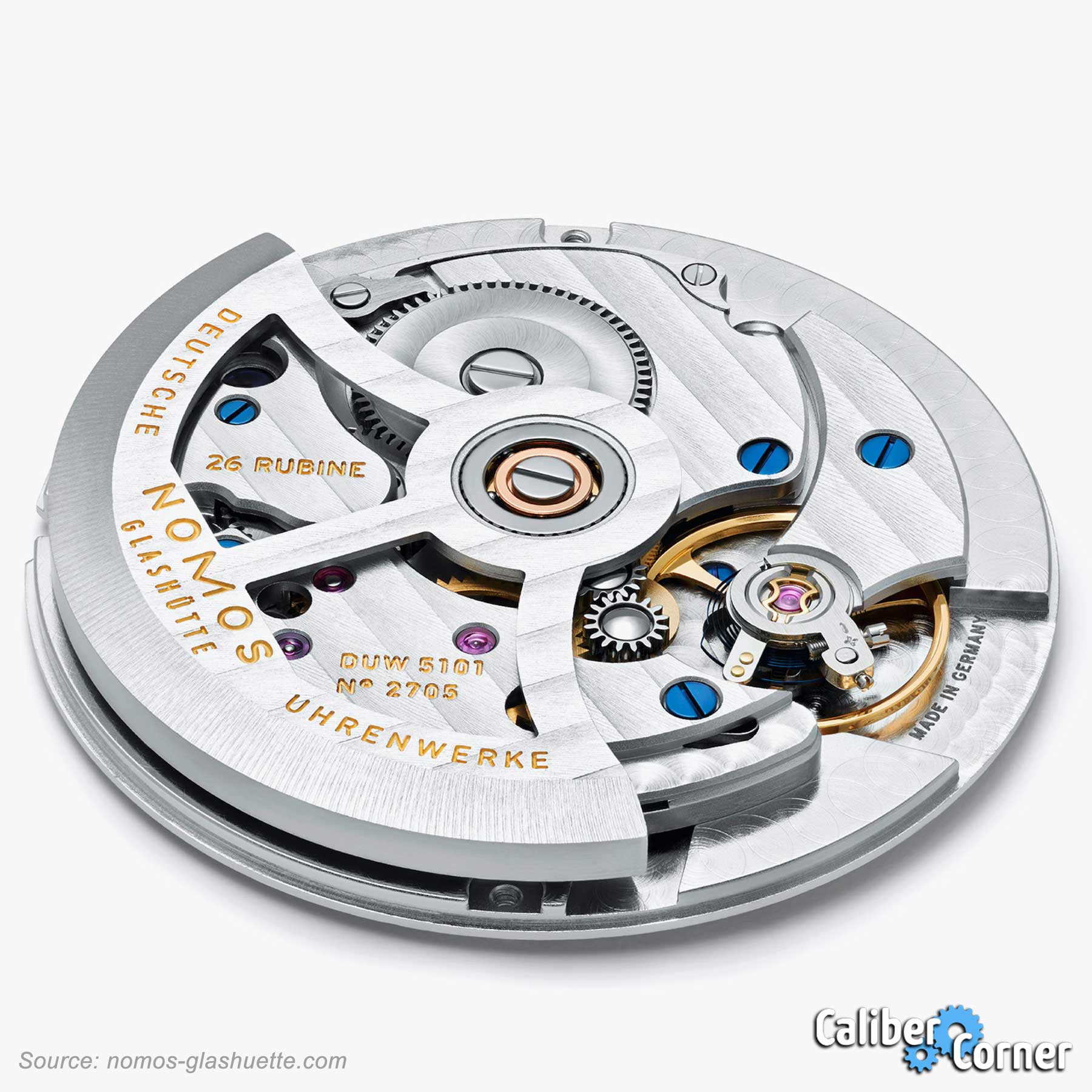 The DUW 5101 is an evolution to the original NOMOS Zeta (ζ) caliber that has since been discontinued. When it appeared in 2006, the Zeta was the first NOMOS automatic caliber to offer a calendar complication (date) via a patented date ring mechanism. The DUW 5101 follows in the Zeta’s footsteps with the same date system, as well an upgrade to the NOMOS Swing System.

Although not COSC certified, NOMOS claims that each watch with the caliber DUW 5101 movement is adjusted according to chronometer standards. The word chronometer is not used on the movement or the dial, but the brand seems to want accuracy to be expected with their products, therefore not necessary to imply on the watch itself.

The DUW 5101 is equipped with the proprietary NOMOS Swing System escapement. This is the brand’s own in-house design/invention. When mentioning their Swing System in marketing materials, NOMOS uses the word “independence” frequently. This part appears to be the brand’s freedom from escape(ment) from dependency on parts from the Swiss conglomerates.

“Around the world and back again: DUW 5201—the first automatic caliber with the in-house NOMOS swing system—makes this possible. It ticks inside all watches with a world time mechanism and is, despite its complication, quite simple to use. And what does DUW stand for? NOMOS Glashütte Deutsche Uhrenwerke—underlining our in-house caliber production and promising you fine watchmaking from Glashütte.” –source 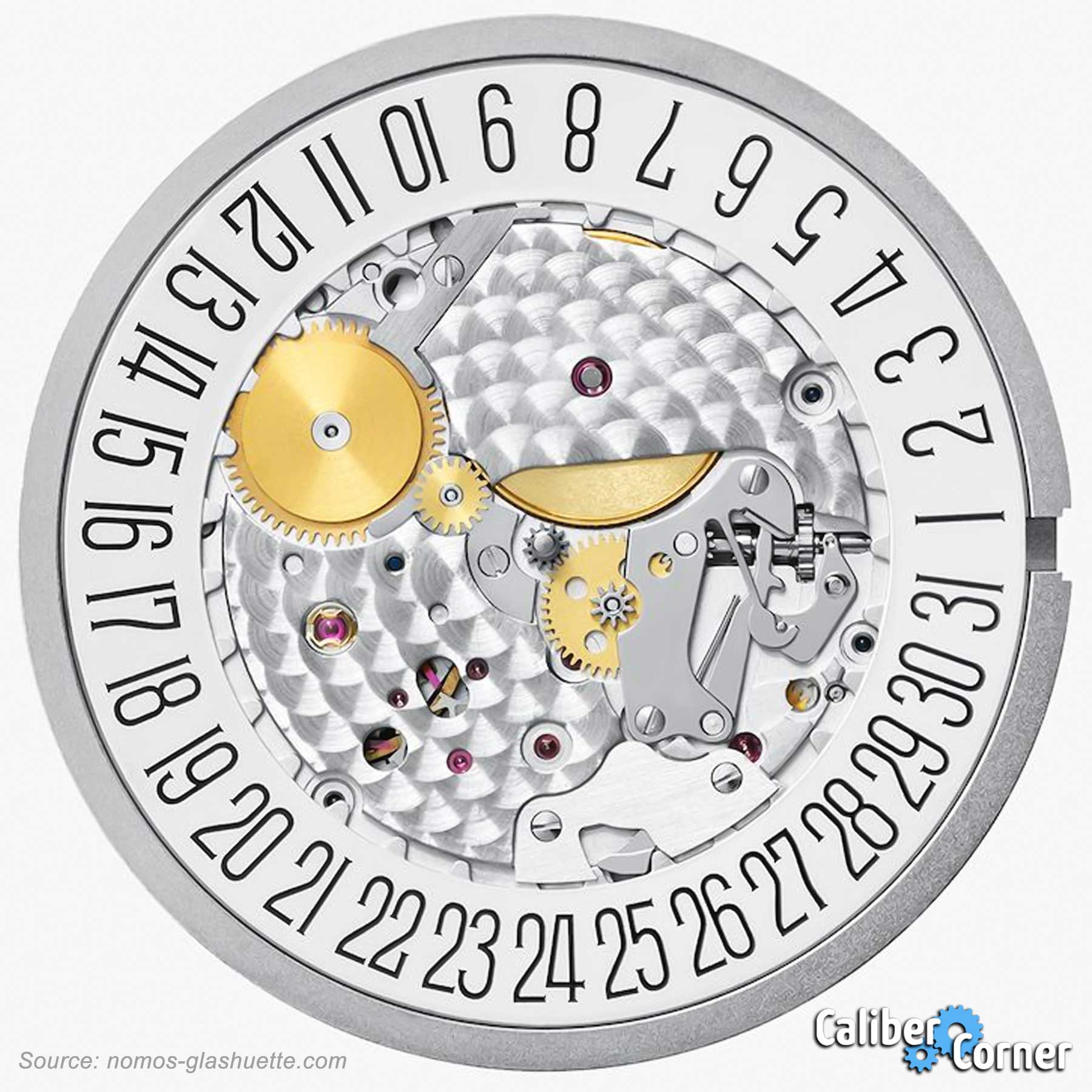