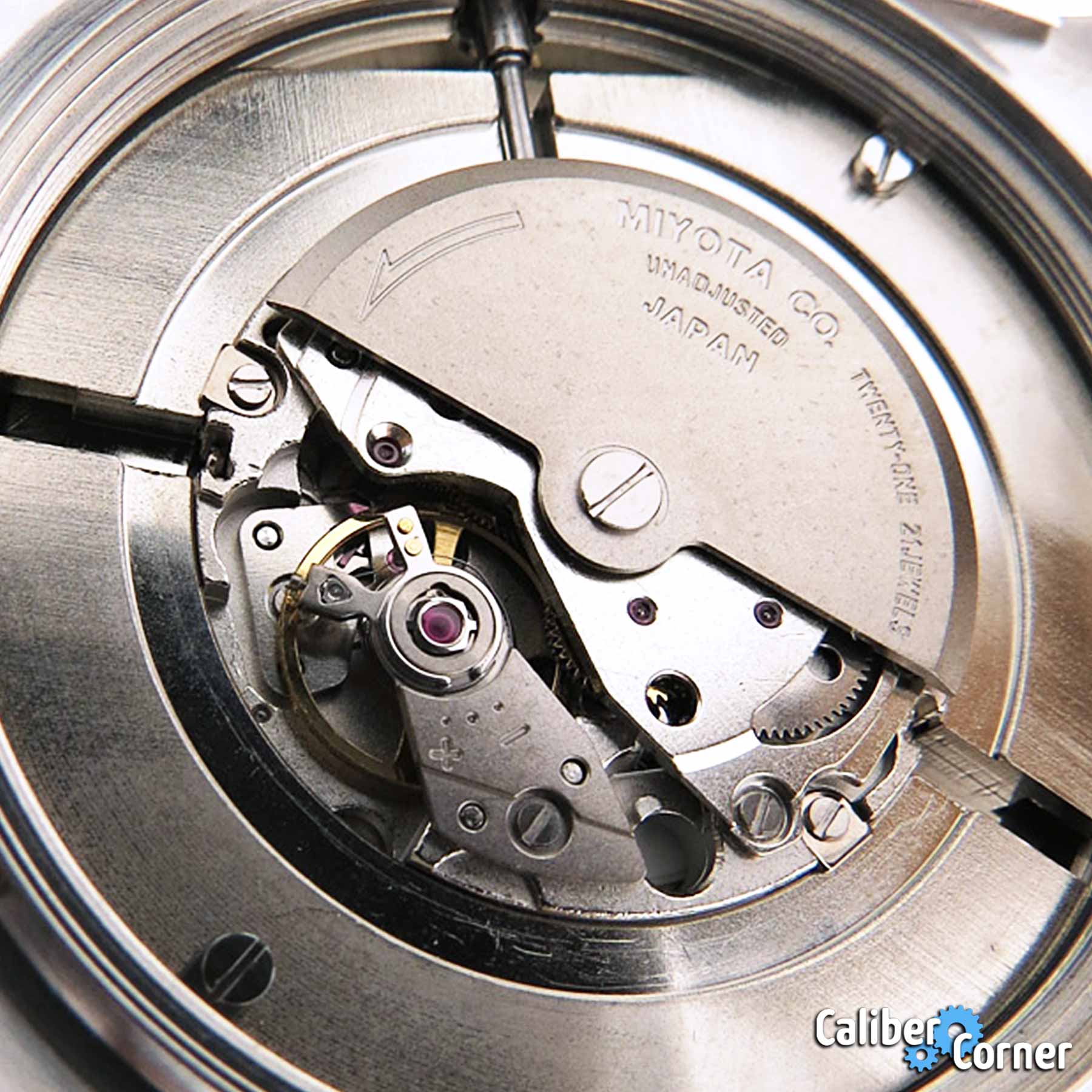 The Miyota caliber 8205 is a 21 jewel automatic movement. It is made in Japan and is found in many new microbrand watches because it is easily obtainable, low cost, and considered an entry level workhorse movement. This movement is also available in gold tone: 8205 Gilt.

There is a popular caliber 8215 which is virtually the same movement as the caliber 8205. The main difference between these movements is that the 8205 has a day/date complication and the 8215 is date only.

Miyota claims the caliber 8205 has an accuracy rating of -20 ~ +40 seconds per day. This is only measured within 10 to 60 minutes from a full power reserve. To achieve full power reserve, hand-wind the crown 40 times. Power reserve or fully wound running time is about 42 hours.

Setting the time and date on your 8205 powered timepiece is straightforward and not unlike most other watches:

Note: Although the 8205 has a quickset date, this does not mean the date instantly flips over at midnight. In fact, the changeover is not instantaneous, so do not be alarmed if you see a partial date when the hands are before or after 12:00AM.

The Day wheel on the 8205 is bi-lingual and available in the following languages from Miyota:

It is interesting that there doesn’t seem to be an English/Kanji option.

Unlike the 8215 which can be found with a white text on black background datewheel, the day/date wheels on the 8205 are only offered with a black text on white background.

The most common configuration for the 8205 is English/Spanish calendar located at 3:00. The next common is English/Chinese at 3:00. It is also possible to order this movement with the day/date at 6:00 in a vertical position, however, this and other languages are special orders and require a 1,000 minimum order quantity with a 2 month production time.

The Miyota 8205 is one of the modern automatic movements that experiences a stuttering or hesitating second hand due to the indirect-drive system for running the central seconds. Learn all about Miyota “stuttering” seconds here.

Replacement prices were found online in the $40-53.99 USD range for individual movements. When ordering wholesale, the caliber 8205 comes in packages of 100 (apparently this minimum used to be 300).

Are there fake Miyota 8205 movements?

Some China based movement factories are producing clones of the Miyota 8205 movement. Some are outright fakes marked with Miyota / Twenty-One 21 Jewels / Japan. Differences are often evident with the rotor (text, cutout, etc). These clones and fakes are being sold with the caliber number “8205”. Prices were found ranging from around $19.99 to $75.00 USD (more than an actual Miyota movement). Also beware of scam sellers using images of legitimate Miyota 8205 (they often steal pictures from this site and remove the watermark) but actually sending fakes.

Be sure to purchase from a reputable source and feel free to contact the seller beforehand for a guarantee that the movements they are selling are from Citizen/Miyota and are made in Japan.