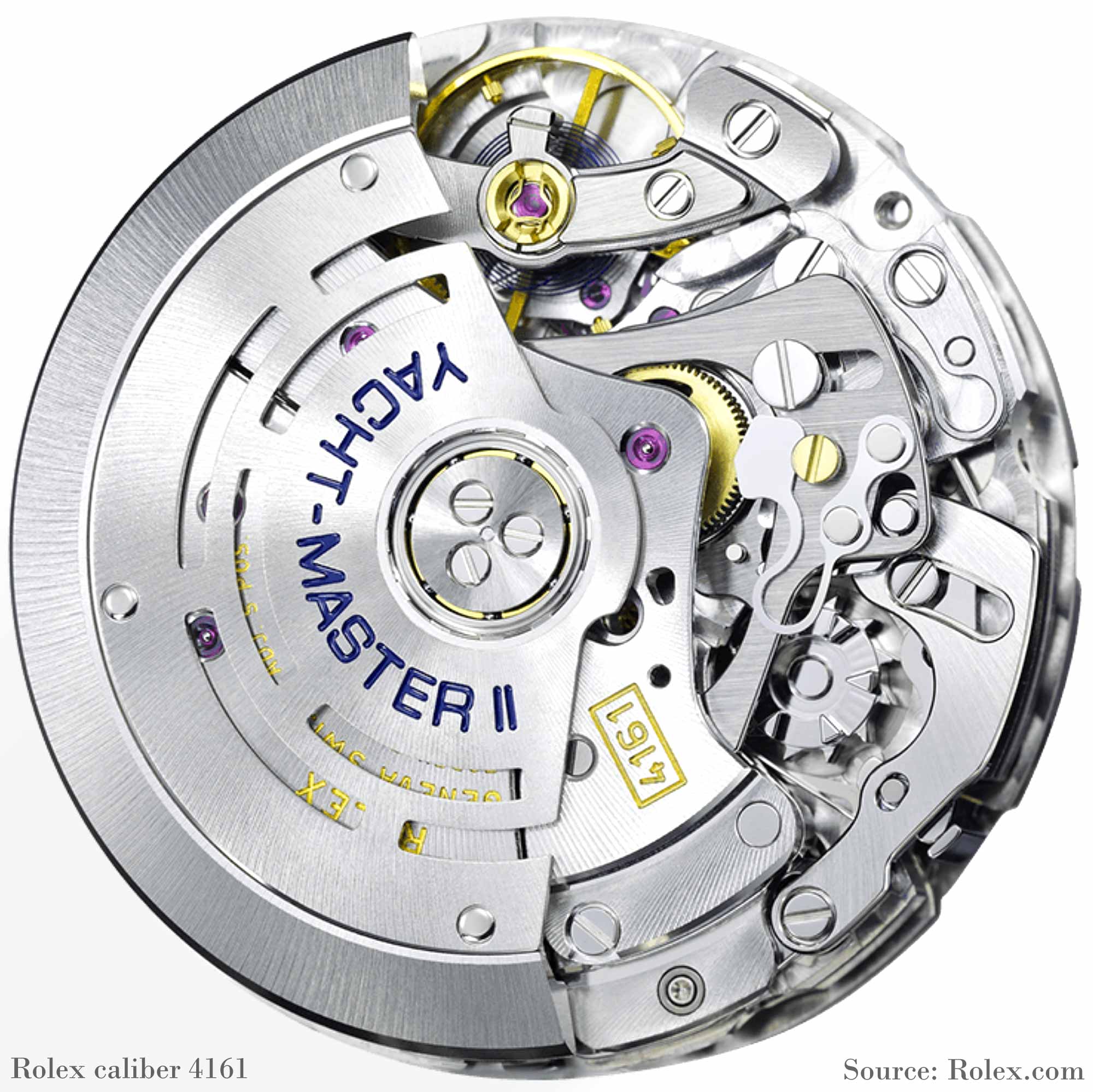 The Rolex caliber 4161 was introduced at Baselworld 2013 in the all steel/blue Cerachrom bezel upgrade of the Yacht-Master II (116680). The first series of gold Yacht-Master II watches (ie: 116688 and 116689) used the previous caliber 4160. The purpose of the features in the 4161 is to time regatta boat races where the starting sequence can last up to 10 minutes.

The 4161 is based on the Rolex Daytona’s caliber 4130 chronograph movement. It has a column wheel and vertical clutch for allowing the chronograph to start instantaneously.

Rolex says they spend over 35,000 to develop the in-house caliber 4161. It is comprised of over 360 parts. Out of those parts, Rolex says “some of them are made by UV-LiGA, a micromanufacturing technology entirely mastered in-house by Rolex. This technology allows the production of components whose tiny proportions or complex geometry rule out manufacturing by traditional machining methods.”

The caliber 4161 is equipped with Rolex’s own Parachrom hairspring. It is made from a niobium and zirconium alloy, resulting in a hairspring that is anti-magnetic and up to 10 time more resistant to shocks than traditional hairsprings. Rolex marketing brochures claim the 4161 has an accuracy of -2/+2 seconds per day. For this reason, they feel their watches surpass the requirements of a COSC certification, so in 2015 they made their own Superlative Chronometer certification which is issued once the movement has been cased.

Functions as described by Rolex:

The countdown mechanism is constructed using a column wheel that extends through the main plate and a vertical clutch. The mechanism makes it possible for the wearer to program in advance of and official countdown time and then start the timer once the countdown has begun and the mechanism can be programmed to count down 0 to 10 minutes. The countdown feature can be locked and unlocked by twisting the bezel through 90 degrees. The Yacht-Master II was one of the first watches in the world to have a bezel that worked in conjunction with the movement.