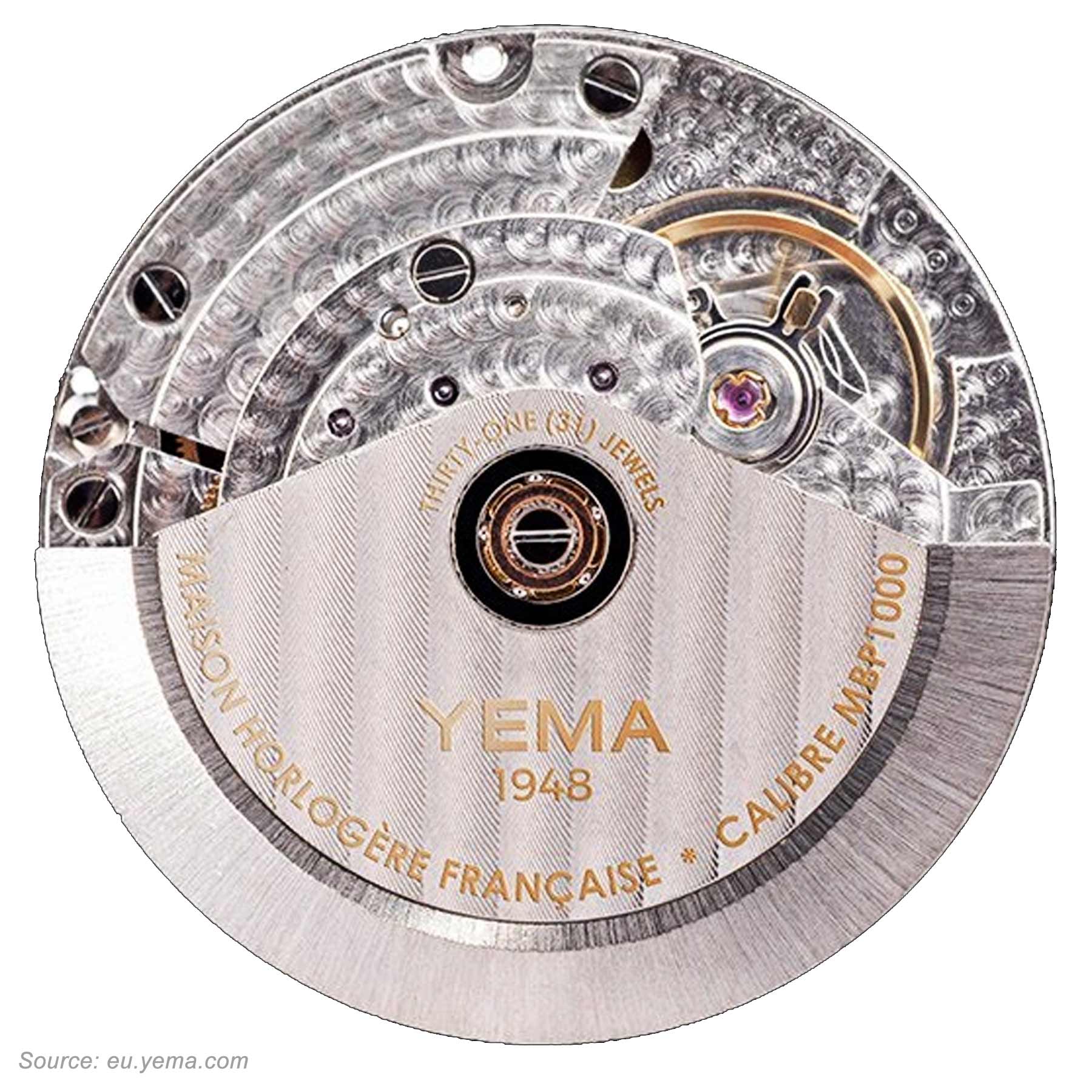 The YEMA caliber MBP1000 is a 3-hand automatic watch movement with 31 jewels. It is the first generation of a line of calibers that has since been updated (see the Evolution section below). This is an in-house movement, assembled in France from foreign and domestic components.

According to the brand, the calibre MBP1000 began in 2011 with an investment of over 3 million Euros. After four years of research and development (although this Kickstarter page says two years), the final product was put into production.

If you are wondering: are YEMA movements really in-house and really made in France? The answers appear to be yes and not enirely. It is the watch industry after all! According to the YEMA website:

“YEMA’s in-house calibers are designed, developed and assembled in our Morteau (France) workshops by our expert watchmakers averaging +30 years of service.”

Designed, developed, and assembled are catchy terms used in the watch industry. Throw “in-house” into the mix and you have a super concoction for a mesmorizing marketing campaign. When a brand states these 3 actions in relation to their calibers, it’s not a lie. You can very well design (2D) a movement anywhere. You can develop (the functional or 3D part of designing a movement) from anywhere. And you can set up shop to assemble a movement from… anywhere. The keyword missing here is: Manufactured. And the big question is, can you manufacture a movement from anywhere? The more you dig into the rabbit hole of watch movements, the more the answer points in the direction of no.

Most brands pitch the fluffy marketing terms and leave it at that. Some others are more self-conscious about it and choose to address it before the community does.

At the end of the day, with the big watch publications working wrist-over-wrist in unison with watch brands (either out of ignorance or for a higher CTR) to throw around terms like “in-house” (see this Norqain caliber), then is up to you and your wallet, dear watch enthusiast, to decide what the actual definition of in-house means to you.

Is a truly in-house movement one that is designed, developed and assembled by the brand at the brand’s headquarters? Or is is a movement that is designed, developed, manufactured and assembled at the brand’s headquarters. Does the outsourcing of any part of that process somehow sully the purity of the notion of what an in-house movement is meant to be?

“For some watch brands like YEMA it makes more financial sense to partner with French, Swiss and Asian components suppliers while completing the final assembly in our workshops.”

Watch brands are so desperate to let you know that although parts of the watch were made in Asia by Asians, that at least it was designed by French, Swiss, Americans, etc… They only let the Asia based factories do the manufacturing part of the process. You must know this! Which could be why this is reiterated at least three times on the YEMA article titled: Where are YEMA Calibers manufactured?

“All the initial stages of our in-house calibers production, including R&D, design and prototyping take place in our Morteau workshops.”

And again, for lest you suspect that the movements are of Chinese origin:

“The final assembly is performed by hand by our Morteau team, with batches of movements moving from bench to bench. We employ designers, engineers, watchmakers, as well as specialists performing quality control of the finished components. This allows us to assemble the final in-house calibers only with excellent characteristics, and avoid exposing defective or low-quality in-house calibers to our customers.”

The dials of the watches with this movement say France at 6:00 as well as on the caseback.

As for production, the same article reveals that the brand has a “modest yearly output of 30,000 in-house calibers.” Yes, that reads thirty thousand. That’s a lot of Yema’s being sold each year.

YEMA states that they test their calibers in 4 positions (dial up, crown right, crown up, crown down), prior to leaving the factory. These tests are performed within 10 minutes to one hour of being fully wound. According to YEMA, 40 full 360 degree turns of the crown will get you to full power reserve.

As for accuracy, YEMA claims an average daily rate of +/- 10 seconds per day for their in-house calibers, with a maximum rate range of +/- 25 seconds per day. This means that the maximum deviation in any position or normal condition (such as the watch running low on power reserve), should not be outside of that maximum range.

YEMA recommends a routine service interval of 3 years for their in-house movements. The following is what is included in a factory overhaul:

“The revisions of our calibers are carried out by our watchmakers, who completely disassemble, clean, lubricate and reassemble all caliber components. Once the caliber is serviced and calibrated, it undergoes a series of specific tests in order to make sure it performs within our standard tolerances.” –source

If you have sent in a watch to YEMA for a routine service, please share your experiences (and costs) in the comments section below…

The MBP1000 is YEMA’s first generation movement and has since been upgraded to become what is known as the caliber YEMA2000. In YEMA’s own words:

“Our new YEMA2000 In-house Caliber is an evolution of the MBP1000 Caliber, several components have been improved in terms of quality and tolerances in order to obtain fundamental gains in precision and durability.” –source

Interesting Observation: One of the notable differences when comparing the YEMA caliber MBP1000 VS YEMA2000 is that the first gen MBP1000 has 31 jewels and the second generation YEMA2000 has 29 jewels. In the original marketing material for the MBP1000, YEMA states:

“The stones total 31 rubies of which 2 located at the ends of the axis of the barrel: A technical choice to effectively reduce the friction generally observed at this mechanical movement’s element.” –source

With the new iteration of the movement having 2 less jewels, it’s curious as to whether the 2 jewels are related to the purpose outlined above.