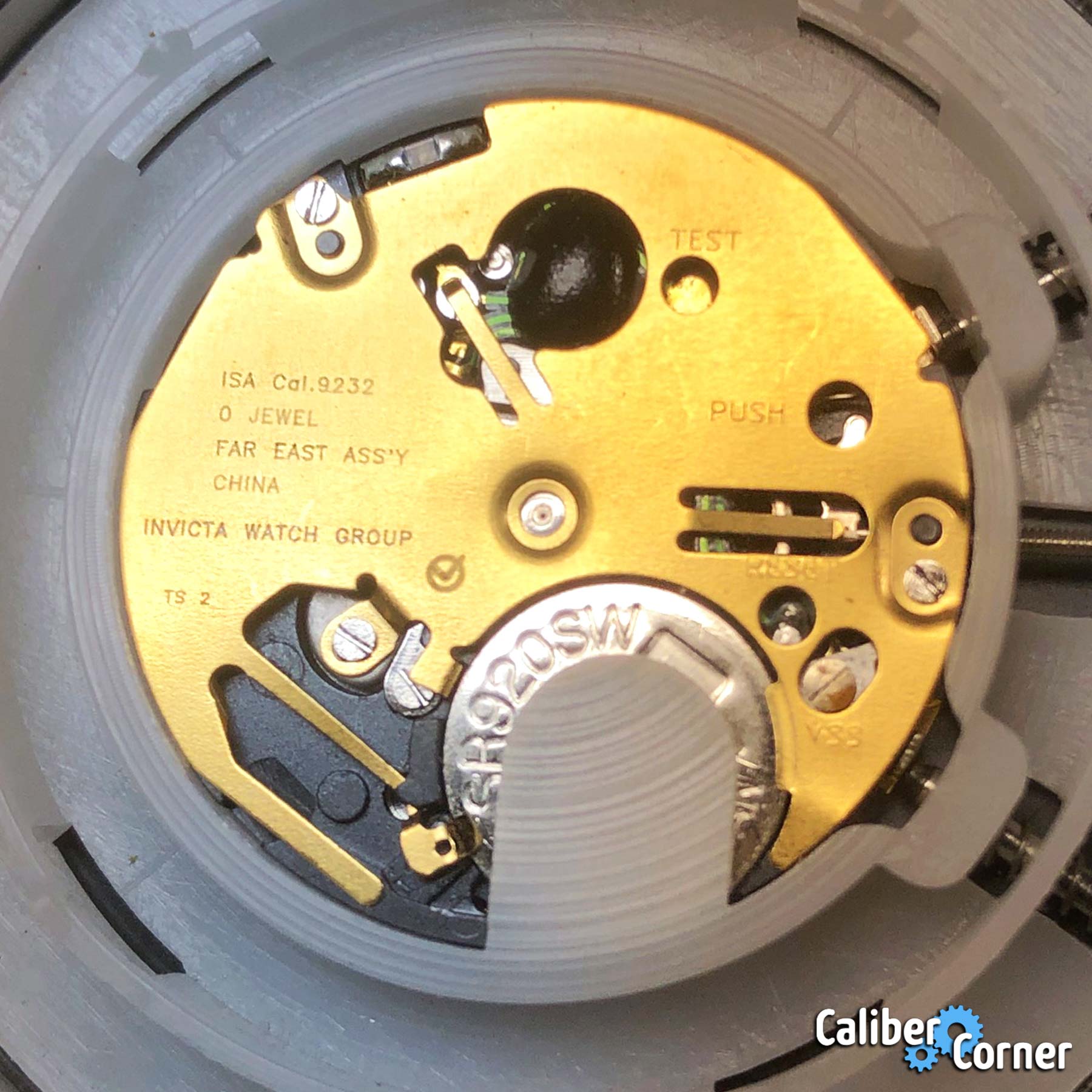 ISA caliber 9232 is 0 jewel quartz movement that is made in “Far East” aka China.

Time setting on the caliber 9232 is straightforward. Pull the crown out one click to set the date, two clicks to set the time.

Although this model has two pushers similar to a chronograph watch, the central second hand is a running seconds indicator and not a stopwatch style chronograph. The top pusher on the side is used to adjust the month (subdial at 12:00). The bottom pusher sets the 24 hour hand (subdial at 6:00) by advancing it forward one hour per push.

There are several variations of the ISA caliber 9232. The main differences between them are the last four digits which indicate the calendar complication layouts. All variations are the same 23.30mm diameter and 4.13mm thickness. All take the same 371 battery cell.

Many ISA movements are listed as possibly being Swiss Made or Far East. Only Far East examples of the caliber 9232 have been found. If you have one stamped Swiss Made, please share it in the comments below. Despite the company being called ISA Swiss and a Swiss flag in their logo, the ISA caliber shown above is stamped China. ISA does/did have a China branch called ISA Pacific Co., Ltd. with a Hong Kong address.

The estimated battery like of a fresh cell is approximately 32 months. There is a power saving or hacking function that is engaged when the crown is pulled out to time setting position.

There is a metal tab with a hole holding the battery in place. You will need to carefully place your tool in the hole on the tab and gently slide it over. This will allow the battery to be released. When installing a fresh battery cell, wedge it under the lipped edge near the VSS stamp on the movement, then press down (with rodico or while wearing a finger cot), you must also be holding the tab to the side until the battery is pressed completely down, then you can allow the tab to slide back over the battery where it should have enough resistance to hold it in securely.

The caliber 9232 has a reset button or current breaker near the battery cell location. After replacing the battery, you may need to perform the following reset procedures:

At the time of this post, this movement was found at replacement prices of $19.95 – 27.95 USD. It should be noted that we were only able to find replacement movements stamped FAR EAST ASS’Y and not Swiss Made.

This movement was found in an Invicta model 0369. On Invicta’s site, they name this watch Invicta Specialty model 0369. Other sellers call it an Invicta Swiss II. Amazon lists this timepiece as having a “precise Swiss-quartz movement.” Invicta Stores description states that this “timepiece is powered by a finely crafted Swiss Quartz movement.” The movement pictured is stamped Far East Assembly and China with “Swiss Parts Movement” on the caseback (pic here). Note: there are versions of the model 0369 that has a caliber VD51 inside and Japan chronograph across the back.

Picture submitted by James the ISA caliber 9232 in his Invicta 0369 watch.