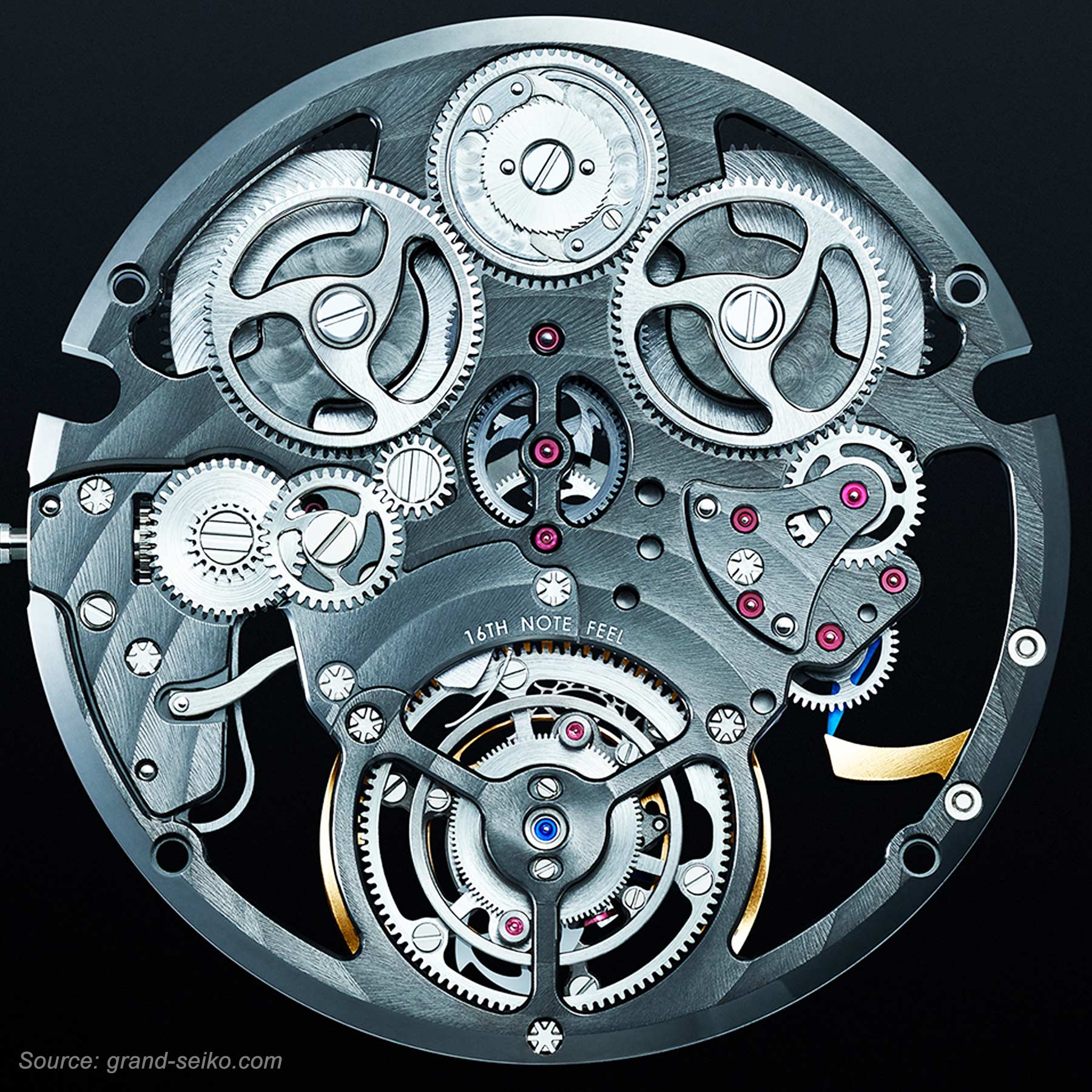 This is a concept caliber produced by a design team lead by Takuma Kawauchiya and is not currently available in any Grand Seiko models (there are no finished watches with this caliber). The movement is on display in Morioka, Japan at the Grand Seiko Studio Shizukuishi.

In Grand Seiko’s own words:

“Seiko Watch Corporation revealed the T0 (T-zero) Constant-force Tourbillon (abbreviated as “T0″) as a concept creation of Grand Seiko in September 2020. It represents the world’s first movement with a fully integrated constant-force and tourbillon on the same axis, aiming to create a mechanical watch with the highest accuracy possible. In the 1960s, Seiko’s mechanical movements dominated top spots at the Neuchatel and Geneva Observatory Competitions, regarded as the most authoritative watch competitions then. With this new movement, Grand Seiko returned to the top in the world.” -Grand Seiko

GS also says the T0 movement is “…intended to elevate precision with a complicated mechanism to pursue further accuracy without consideration of mass production.”

By their nature, mechanical watch movements operate based on the transfer of energy from the mainspring to the escapement. The amount of force needed is variable depending on how much energy remains in the mainspring. For this reason, watches do not keep the exact same accuracy throughout the entire duration of power reserve. This is why testing is done over the span of days to get an average rate of timekeeping.

“A constant-force preserves power in a small spring called a constant-force spring, which is different than a mainspring, and uses the repulsive power of this small spring to power a pendulum or a balance. The mechanism is often compared to an impounding dam and it is excellent in the way that it ensures stable torque.” -Grand Seiko

With constant force technology, an equal distribution of energy is sent to the escapement despite the amount of energy stored in the mainspring. Thanks to the constant force mechanism, the movement will maintain the same rate when fully wound as it would when on its last hour of power reserve.

Grand Seiko is not the first to develop a constant force tourbillon (Arnold & Son, IWC, Andreas Strehler Trans-axial Remontoir Tourbillon), but according to the brand, the T0 is the first movement to incorporate “a fully integrated constant-force mechanism and tourbillon on the same axis.”

With Baselworld 2020 being cancelled, the watch community is thirsty for new releases and announcements. As impressive and important as this caliber is to the watch world, the launch of the T0 appears to also be serving as marketing material for 9S65 and 9SA5 powered watches.

Grand Seiko states that the T0 is based on the GS caliber 9S65. Furthermore, the official press-release mentions that their Hi-Beat caliber 9SA5 (introduced in August 2020) was inspired by the T0 development. While the T0 is not available, this announcement is a reminder that watches with the 9S65 and 9SA5 are on the market.

“It was a natural choice to develop T0 based on Caliber 9S65, which had been tried and trusted. Key components such as the mainspring, the wheel trains, the escapement, and the balance are designed based on those of 9S65. The setting lever and yoke were designed based on 9S65 as well.” -Grand Seiko

“…the pursuit for higher accuracy and the watchmaking technologies including movement finishing of T0 contributed to refining the revolutionary mechanical caliber, 9SA5.” -Grand Seiko

From the official press-release:

“In pursuit of the highest level of accuracy for mechanical watchmaking, the designers conceptualized the new creation without restrictions from production capability considerations. The free approach to development resulted in the birth of T0 and inspired essential movement parts for the new Caliber 9SA5, which was developed in parallel with the concept creation.” -Grand Seiko

On the image below, the back of the movement features text above the tourbillon reading: “16TH NOTE FEEL”. 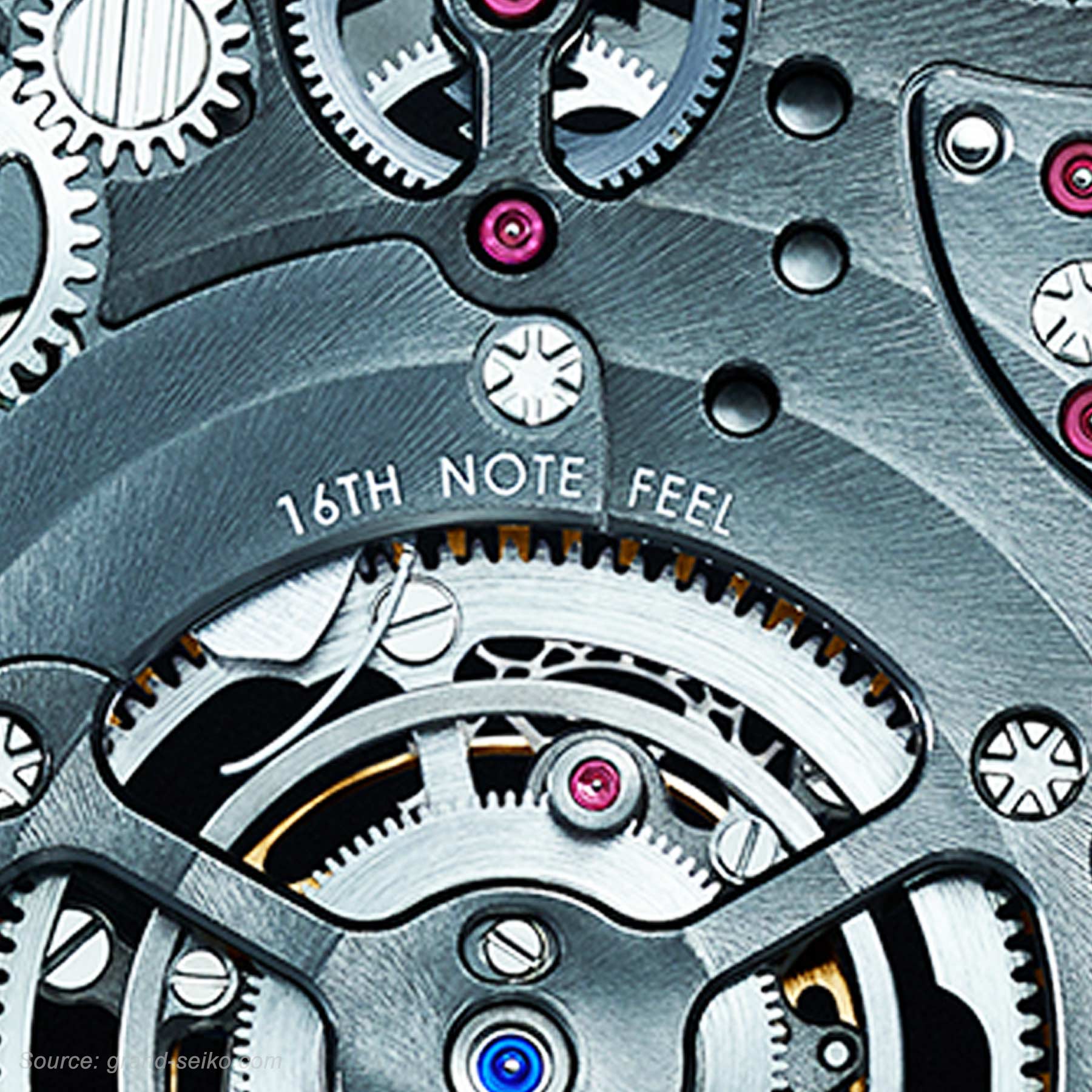 16th note feel is a drumming reference that Grand Seiko relates to the ticking sound the T-Zero puts out. Because the escapement on the T0 beats at 28,800 vibrations per hour, the movement ticks 8 times per second (hi-hat), combined with a constant force ticking for each passing second (bass drum).

The official press-release invites watch enthusiasts to visit the second floor lounge of the Grand Seiko Studio Shizukuishi where the T0 is on display:

“The rotating tourbillon and intermittent turning of the constant-force as well as the rhythmical 16th note ticking sound of the mechanisms can be thoroughly enjoyed.” -Grand Seiko

It’s nice that this can be head in-person, but Grand Seiko should make a video of the movement display in action and share the sights and sounds with the world remotely.

Front side of the T0… 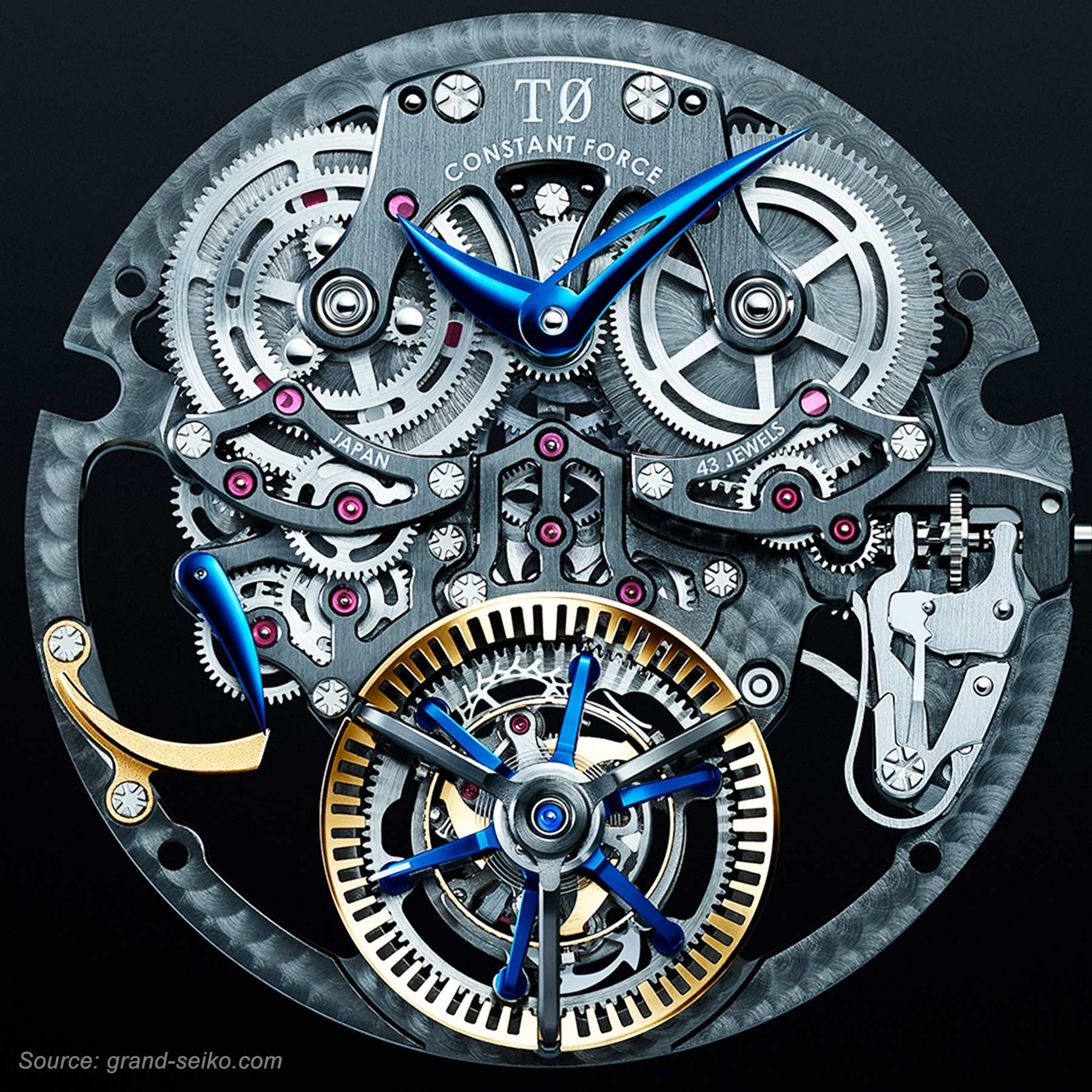 Angled view of the T0… 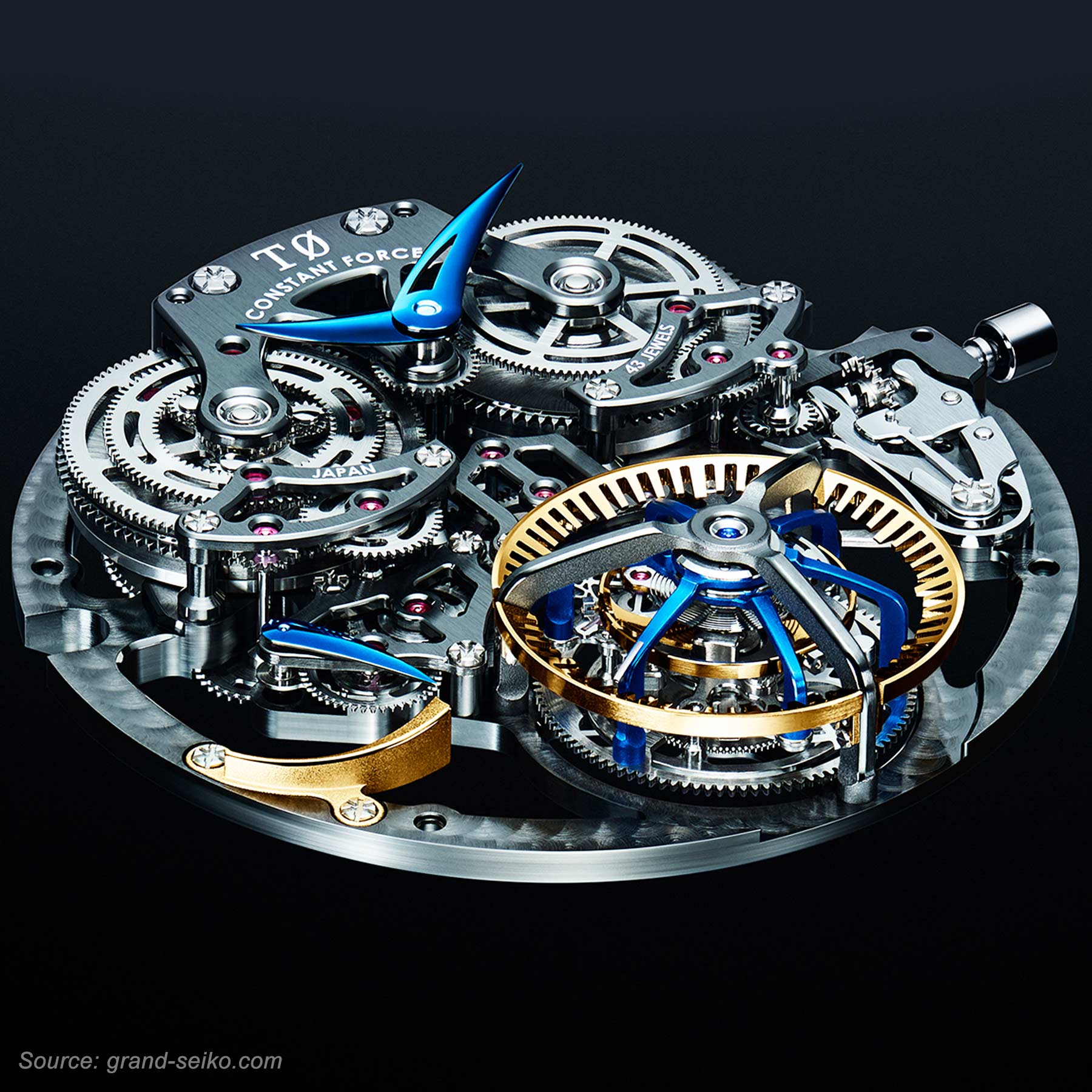