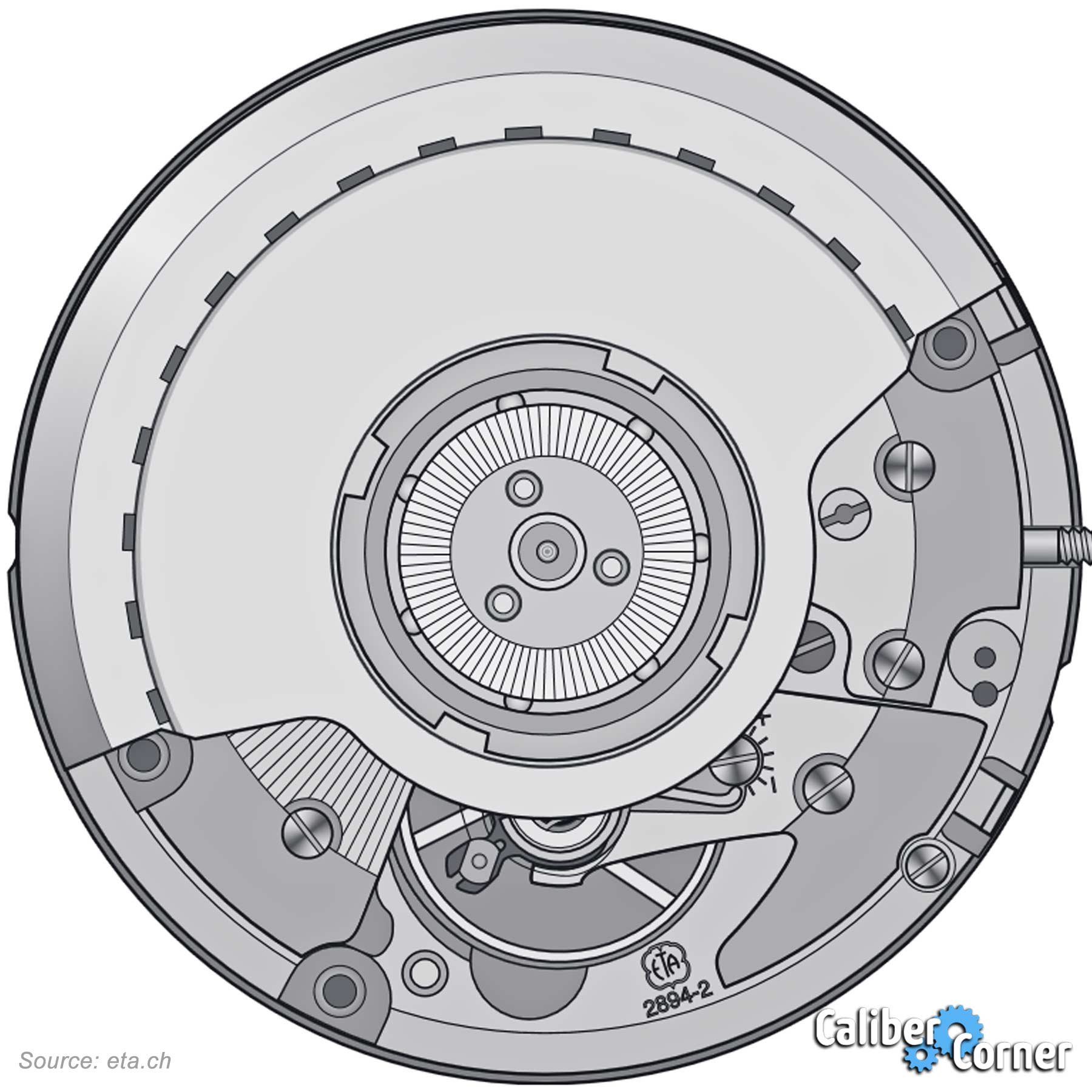 The ETA caliber 2894-2 is a Swiss made automatic movement based on the ETA 2892, but with a chronograph module (made by ETA, not Dubois Depraz – see below) 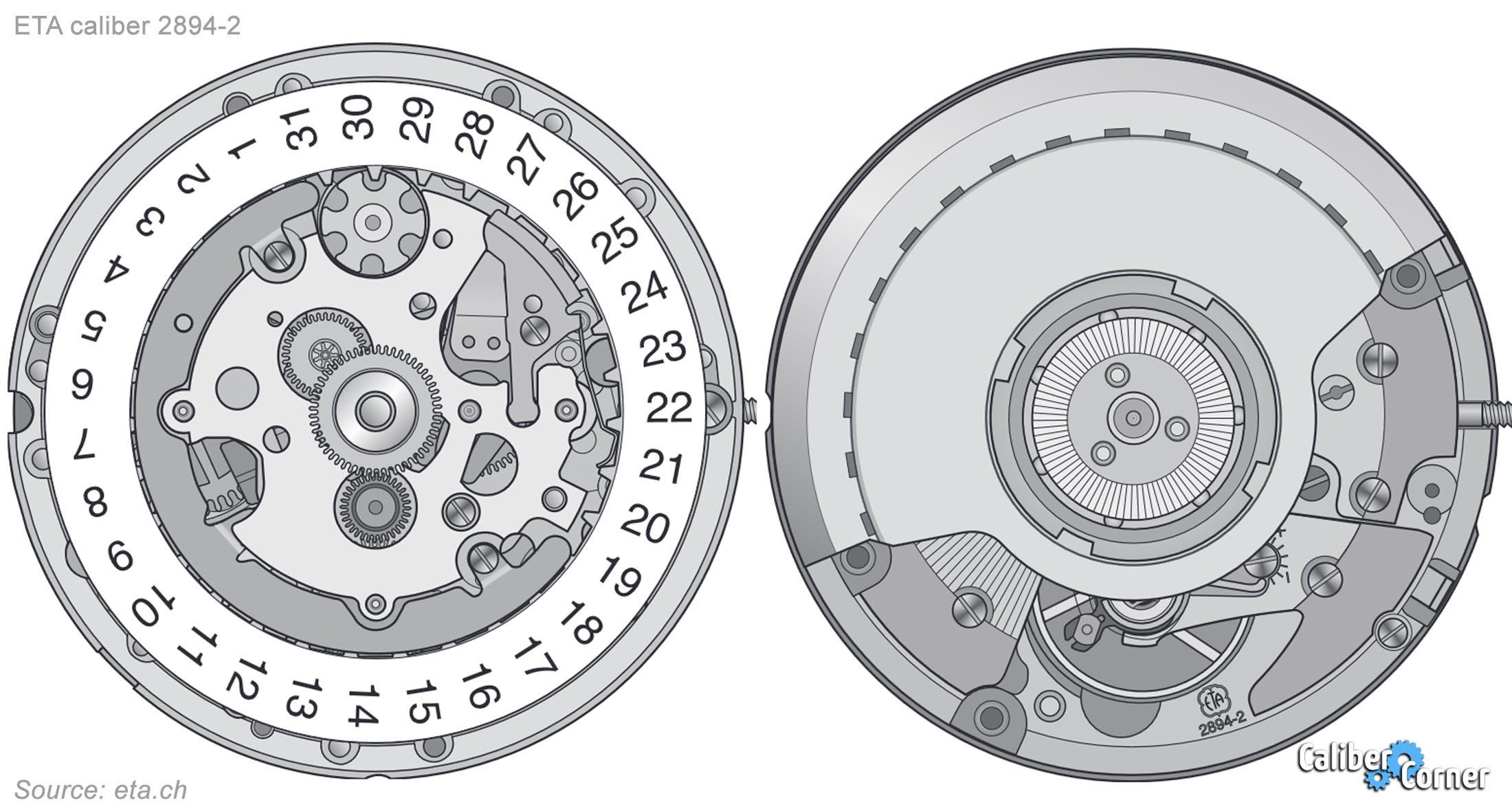 The 2894 was introduced circa 1996, however, the most recent documentation available appears to be dated as far back as 2007. Tech sheets appear to have been updated as recent as 1/2/2020, despite this movement not being available for sale from ETA.

Was the chronograph module made by Dubois Depraz?

No, the chronograph module was made by ETA and has an ETA part number 8510 (not DD). This module was available for individual purchase from ETA at one point. Some watch parts sellers may still have new old stock examples available for sale. They also pop up on eBay every so often.

You may see some call this a cam style chronograph and some call it a column wheel style. Of course, ETA does not refer to it as either, and only lists a module part number with no technical documentation for the module itself (if you come across module specific tech sheets, please share). Although not visible from the back of the movement, the module does appear to have a column wheel design used to control the chronograph functionality. It may not be exactly what most are used to when they think of “column wheel” or “pillar wheel” designs (it is flatter than most), but it appears to function as expected. You can see an example clearly in the service video below, specifically around the 20:45 timestamp.

The 2894-2 is based on the ETA caliber 2892-A2 framework. There are some shared parts, but this doesn’t mean that the two movements are are interchangeable by any means. It is essentially a 2892 with a chronograph module. This gives the 2894-2 larger measurements in diameter and height, as well as a higher jewel count.

When it comes to comparing the 2894 to the 7750, there are two notable points inside and out. On the outside, the dial is considered by watch enthusiasts to be much more balance, with a 3-6-9 Daytona style chronograph layout, compared to the 7750 with its 12-6-9 layout. But the aesthetics come with something else to consider, which is on the inside: As mentioned above, the 2894-2 has a chronograph module built on to a 2892. This chronograph module has long been understood as being unserviceable, and although you may find watchmakers who are willing to service a watch with this caliber (and there is a full video below), it will not be as easy as finding someone to work on a 7750.

What position should the crown be in the extract the crown and stem from the cal. 2894-2?

Hand-winding position, at least according to the poorly written instructions from ETA. 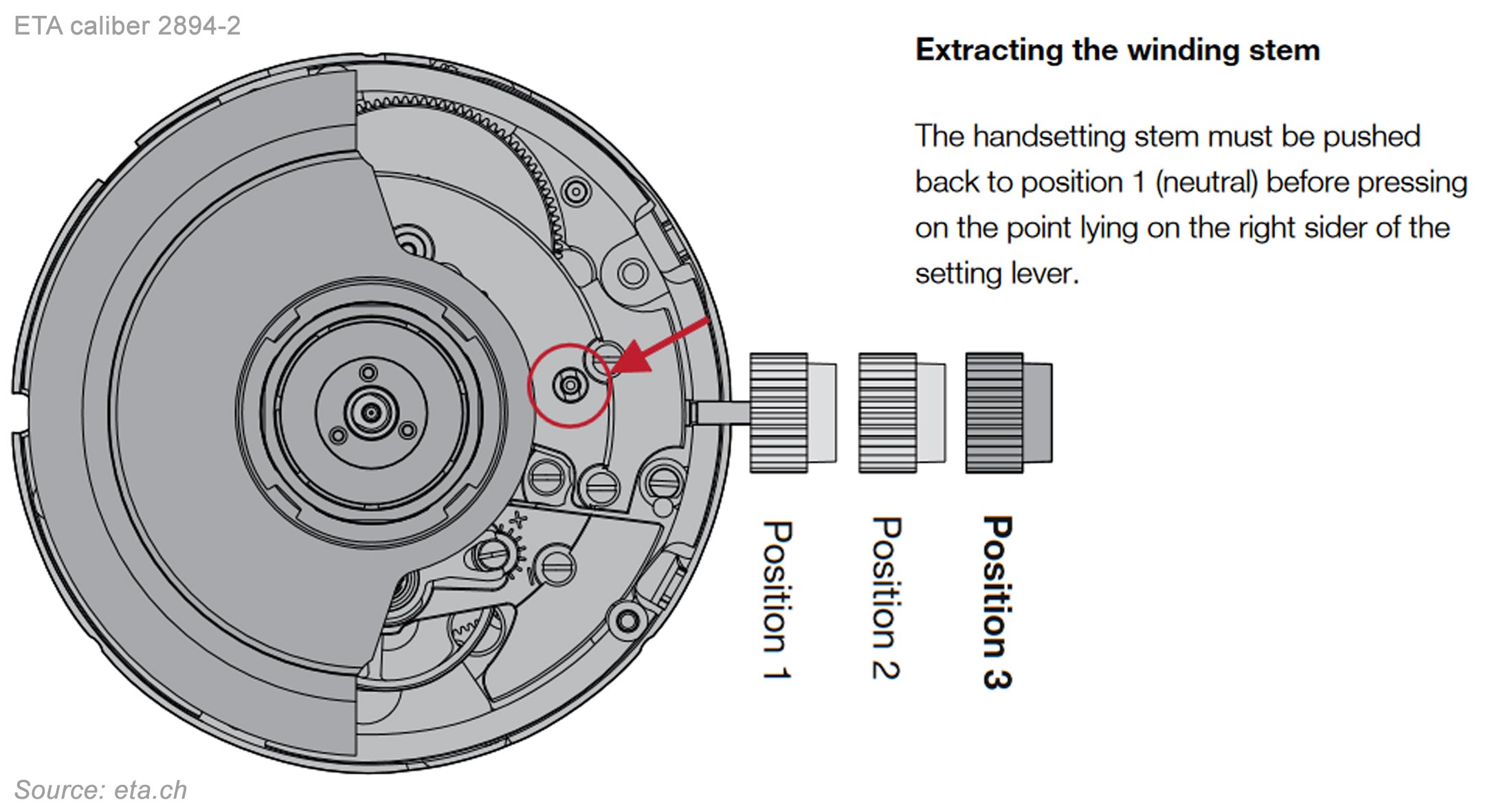 According to technical documentation, ETA officially states that they recommend not using the same chronograph second hand twice. Could this be part of the unserviceability concern and why some watches come back from service at the manufacturer with a shaky chronograph seconds hand? (Looking at you B&R, grrr.) Also, it is recommended to use the ETA movement holder when testing the chronograph outside of the case.

Note: this is an excellent detailed video, but ignore where it mentions “Dubois Depraz”, but the video creator has acknowledged the mistake in comments.