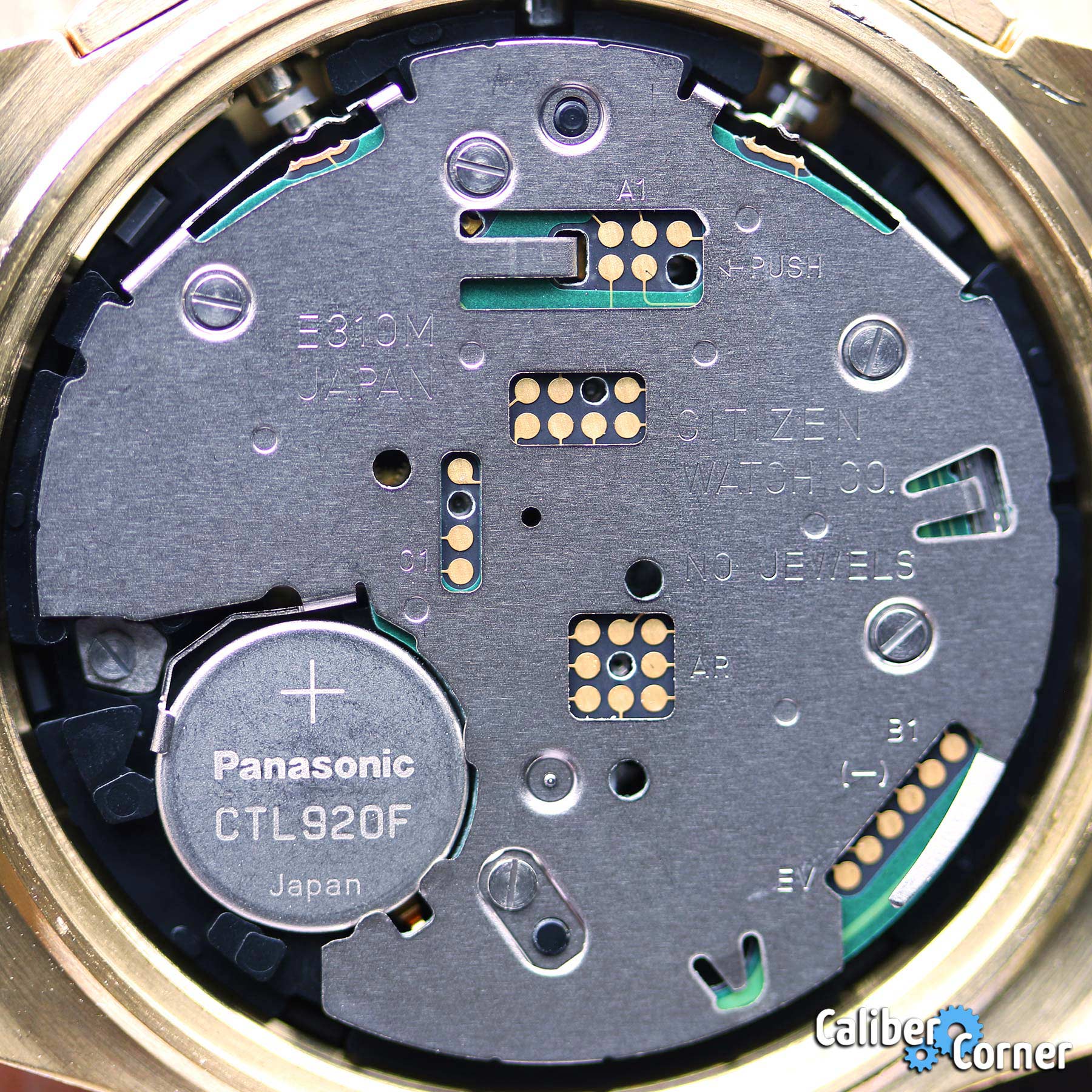 The Citizen Eco-Drive caliber E310 is a solar powered quartz movement with 0 jewels. This movement is a perpetual calendar (until February 28, 2100).

The movement shown above is signed as caliber E310M. As far as we know, the M is simply a evolution indicator, however, we have not see other letter variables. We have sent an email to Citizen asking for some clarification on this, as soon as they reply we will update the post. Until then, we’re going with E310 as the main caliber number.

Citizen states the accuracy of this movement to be +/-15 seconds per month between the normal operating temperatures of 41-95 Fahrenheit .

Although this caliber looks and acts like a quartz movement, it is not powered by a standard battery cell. There is a capacitor that looks like a battery with a metal tab welded onto the back. This is a capacitor which Citizen refers to as a secondary battery. The purpose of this capacitor is to store electrical energy. When fully charged, it can continue to run for up to 12 months.

How to Charge the Movement

Being a solar powered movement, light energy is needed to charge the capacitor. Place your watch dial up in a well lit area such as a window sill so that the solar cell can absorb the light energy. Natural sunlight is typically the best way to charge your solar powered watch. Keep in mind that if it is a hot day and your watch is left in direct sunlight for too long, it could cause the dial or other parts of the watch to become damaged. Place the watch in the light but not in the heat (avoid recharging over 140F). It is not possible to overcharge the capacitor with light thanks to the movement’s built-in overcharging prevention function.

How Long to Recharge?

How long it takes to fully recharge your Eco-Drive solar powered caliber E310M entirely depends on the power of the light source. See chart below from the Citizen manual:

When the capacitor (secondary battery) is losing energy, there is a low energy function of the movement that causes the second hand to jump every two seconds. During this time, the watch will continue to keep the correct time. After about three days of experiencing the low energy warning without being recharged, the watch will stop running. After the battery is charged, the second hand should start running again like normal.

If you charged your watch with light and are still seeing the skipping seconds hand, this is an indication that the time is incorrect due to the time being stopped before. Simply set the time and the second hand should go back to normal after pushing the crown back to position 0.

If you placed your watch in the light for an extended period of time and still experience the jumping second hand or stopped time, it could mean that capacitor needs replaced.

Although the capacitor/secondary battery in the caliber E310 appears to be a normal battery cell, it is not. Do not try to fit a regular battery in the movement. Only use the replacement Citizen part 295-758 (295-7580) as shown below – the cross-over part is a Panasonic CTL920F. Changing it is like changing a regular battery, just make sure the metal tab is placed in the slot correctly.

With the crown in position 0, look for the small hole on the movement and press it while gently pulling the crown/stem out.

At the time of this post, replacements for the caliber E310 Eco-Drive solar-powered movement were not found online. If you need a replacement, you may have to find a used watch for parts. As noted above, if your watch is not holding charge, it doesn’t necessarily mean you need to replace the entire movement, but rather the capacitor. The replacement price of the capacitor is in the range of $21.95-30 USD. Buy it here.

Examples of watches with caliber E310 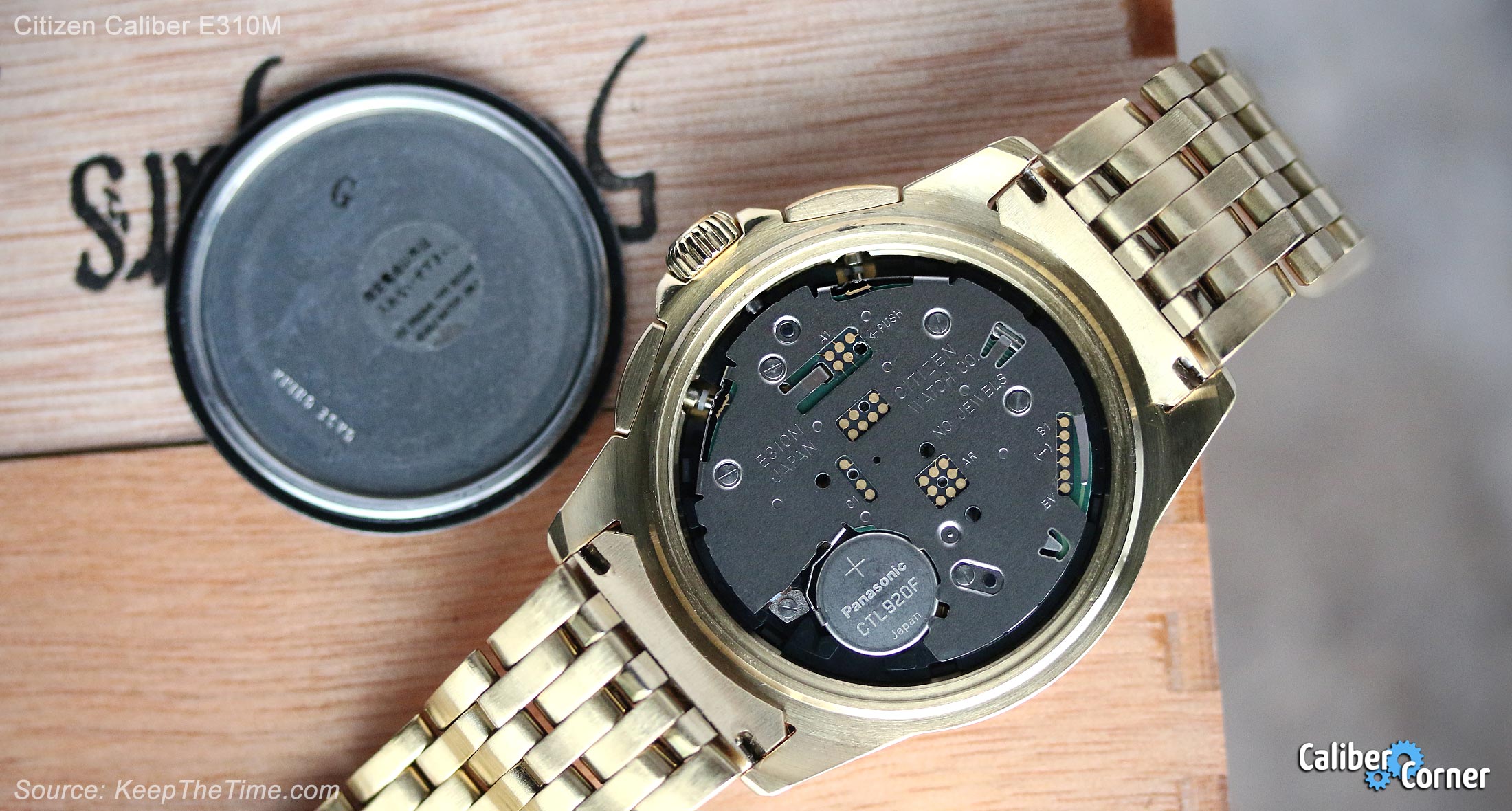 Please discuss your experience with the Citizen caliber E310 in the comments below… And please note if you have an E310 with a letter other than M on the end.