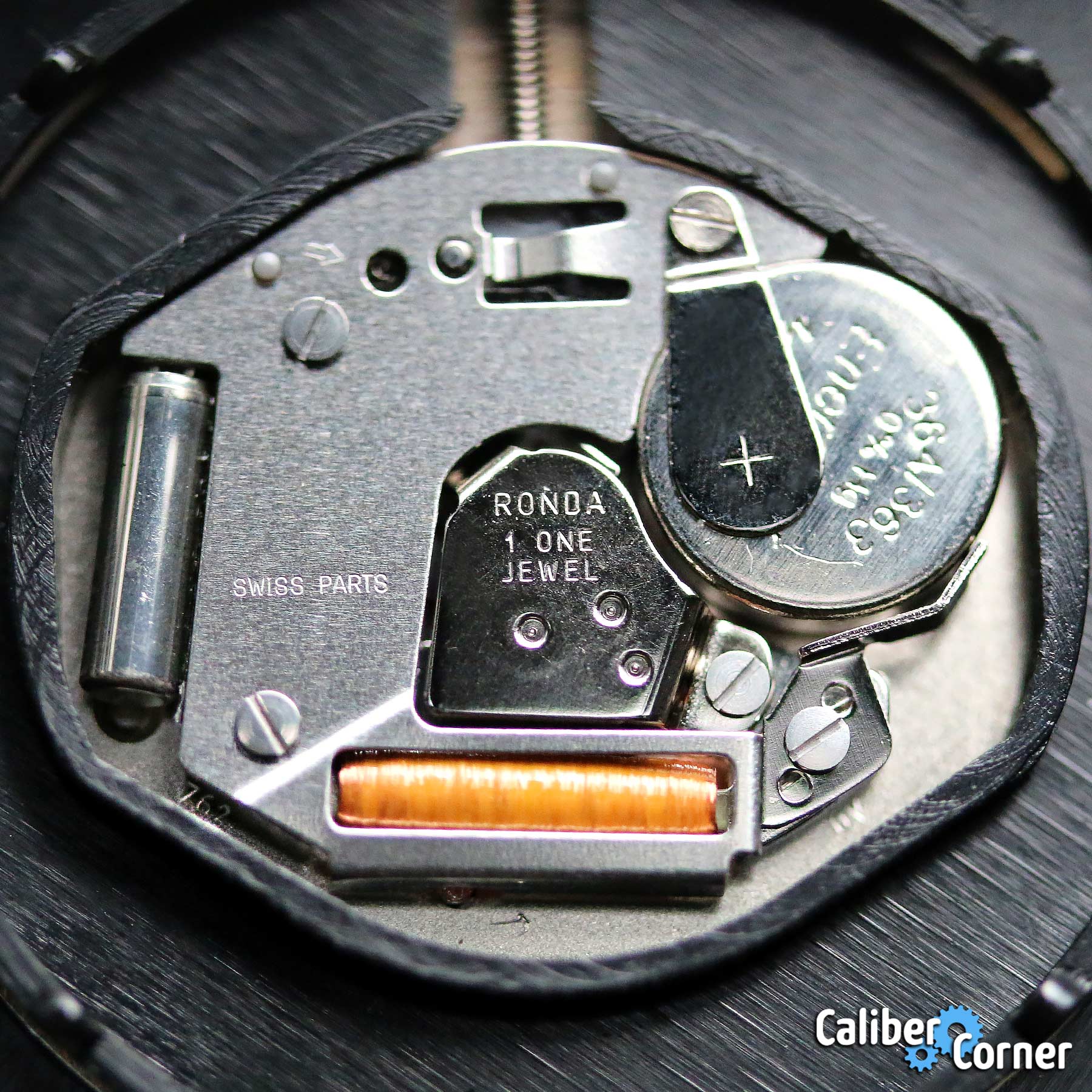 The Ronda caliber 762E is a small 2-hands quartz movement with 1 jewel.

Swiss Made or Swiss Parts?

The Ronda 762 can be labeled as Swiss Made or Swiss Parts. Either version is nickel plated and has 1 jewel. The version should be clearly stamped with the version. 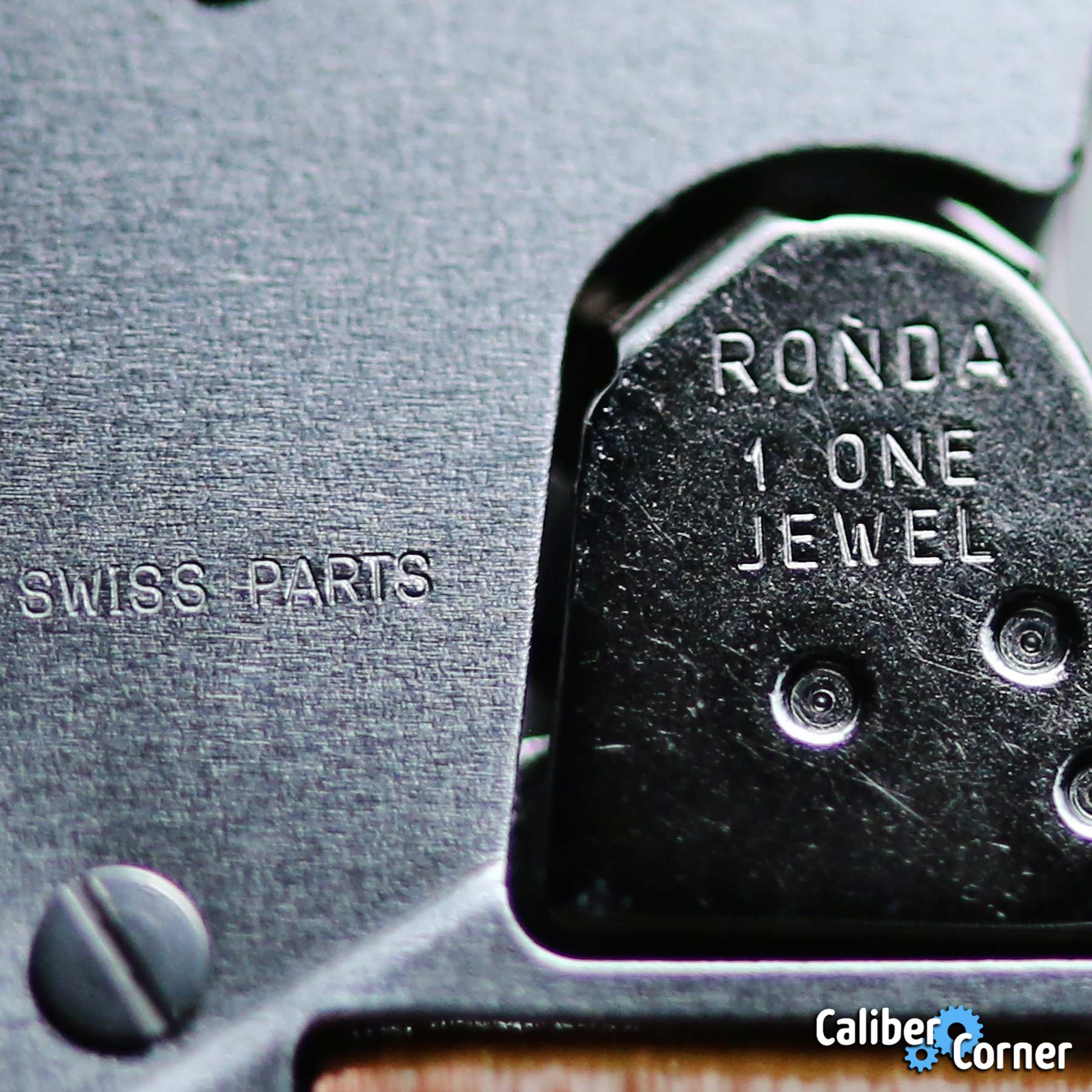 Made in China with Swiss Parts?

Ronda does not appear to disclose the origin of assembly for the Swiss parts option, but it is likely China.

According to the Ronda website, there are two versions of the caliber 762. The movement listed here is a 762E which is nickel plated with 1 jewel, and can be Swiss made or Swiss parts. The caliber 762 is gold plated with 4 jewels, and is only listed as being Swiss made.

Other than that, they both spec out as basically the same with the same size, battery life, etc.

Ronda categorizes the 762 as part of their Normtech line, while the 762E is listed as a member of the Powertech line of movements.

The E versions cost less, therefore, it’s possible that the E could stand for economy.

Some manufacturers will put “Ronda 762” in their specs even though the watch actually has a caliber 762E. This may not be deliberate since the caliber number is “762” on both variations.

How to tell is by looking at the color of the movement. The gold versions are caliber 762, the nickel (silver) versions are 762E. If you find a movement engraved with “762E”, please add a pic to the discussion below.

The battery in the 762E is supposed to last up to 10 years. Keep in mind that this does not mean 10 years from the time you purchased your watch – who knows when it was assembled and how long the seller had it for.

When it comes time to replace the battery, you will need a 364 cell. Buy a pack of 364 batteries here (your purchase supports this site!).

Gently loosen the screw holding the metal battery strap. It is not necessary to fully remove the screw. Slide the strap to the side and place the new battery inside, slide the strap back over and tighten the screw. You may need to hold the strap in place with your finger cot or Rodico while tightening the screw, to avoid it being moved too far over from turning the screw. 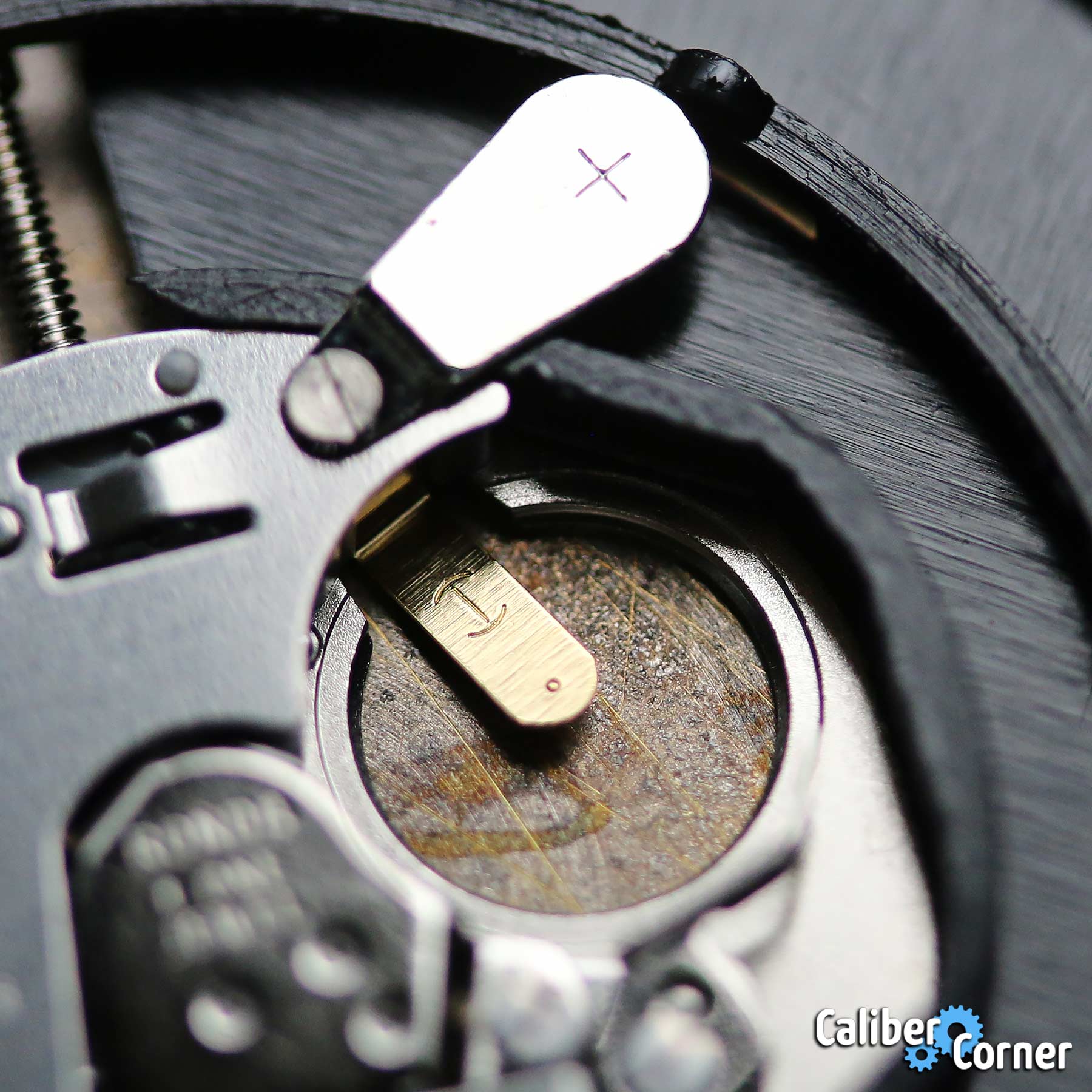 In their official documentation, Ronda claims that the 762E has an accuracy rating of -10~+20 seconds per month.

The Ronda 762E example shown on this page was found in this Android (Aragon) Infini Tungsten watch. 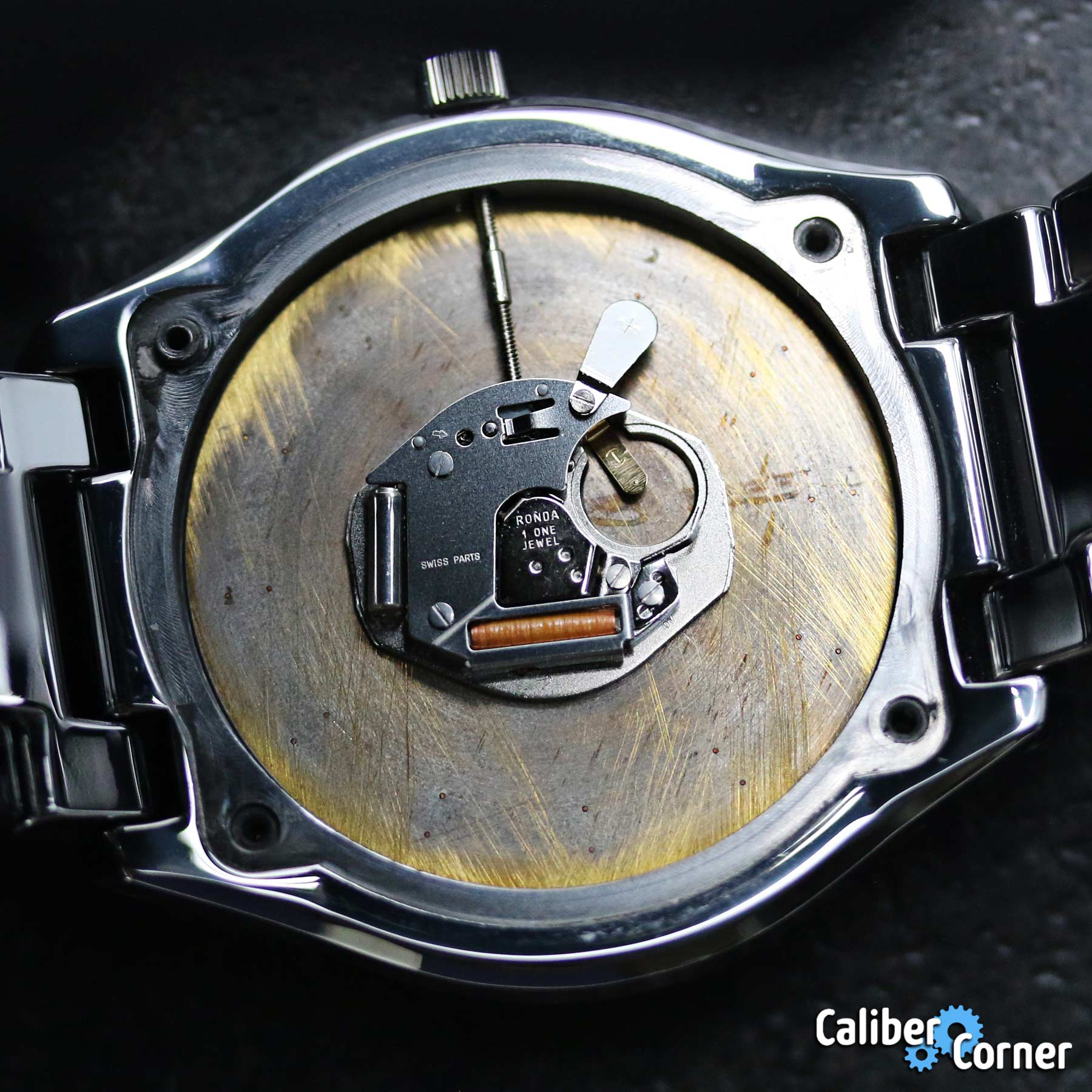 This movement also has another pair of characters stamped on the main plate below the coil: A0. This could be a date code or a factory of origin stamp. Please check your movement and share if yours has a stamp so that the CC community can crowdsource more data like this. 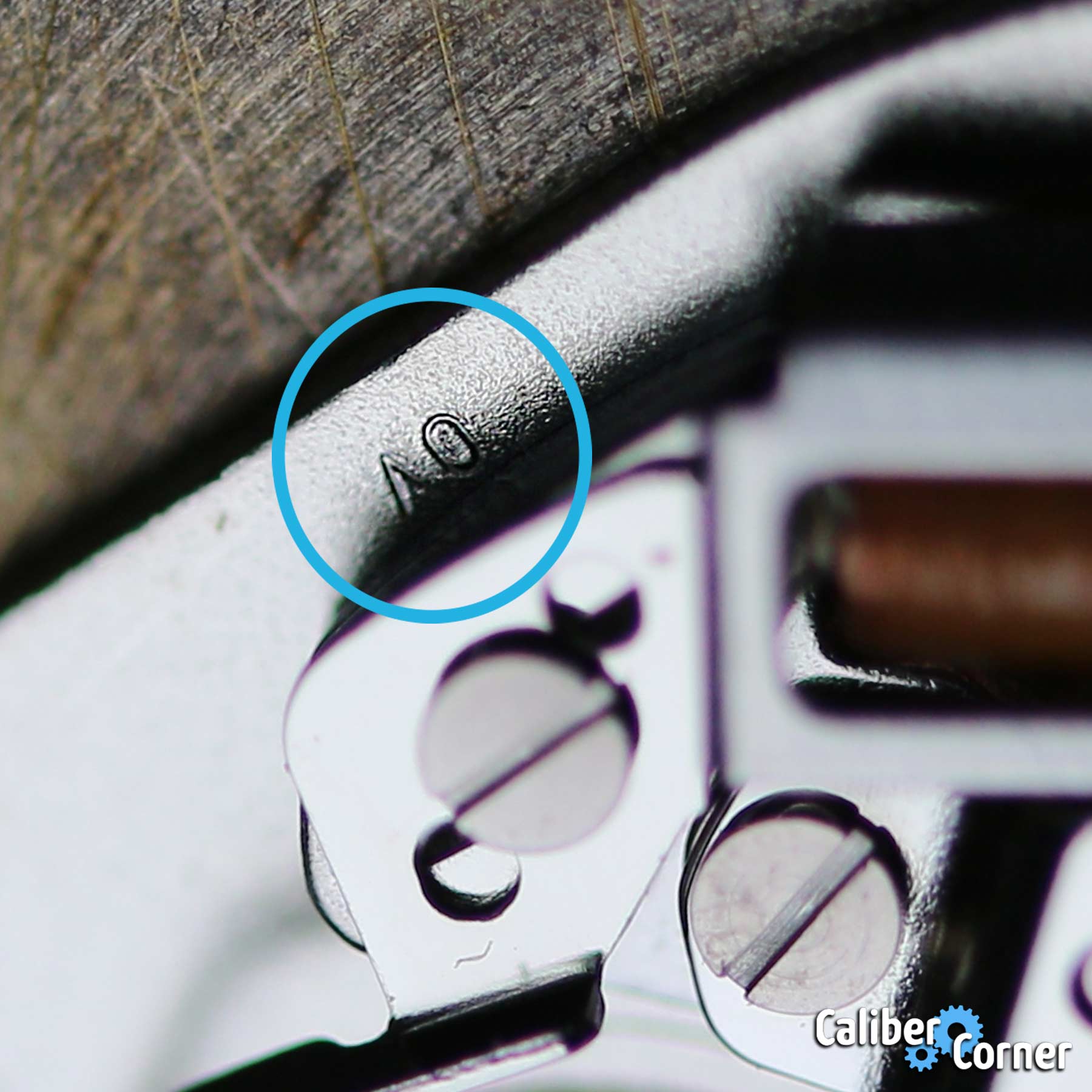