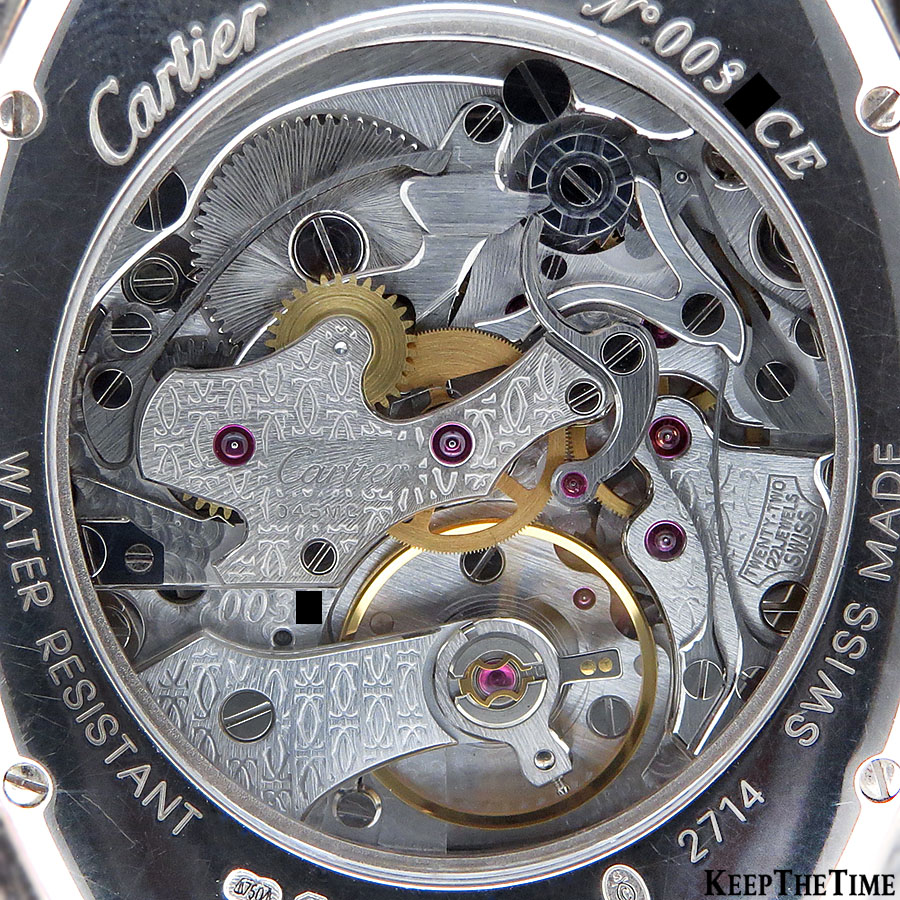 The Cartier caliber 045 MC is a mechanical single-pusher chronograph movement with 22 jewels. This movement was launched in 1998. The caliber number is also written as 045MC.

Monopoussoir is French for “single pusher”. A traditional chronograph movement has two pushers: one to start and stop the chronograph seconds hand, and one to reset the hand to zero. The caliber 045MC has a single pusher complication that handles all three tasks of starting, stopping, and resetting the chronograph. Furthermore, the 045MC does not have an additional pusher, rather the pusher is integrated into the crown. It is complicated, yet minimalist.

The 045MC was produced for Cartier by THA (Techniques Horlogères Appliquées), a movement house that was started in 1996 by François-Paul Journe (F.P.Journe), Vianney Halter, Denis Flageollet (co-founded De Bethune).

Watches with this caliber:

The movement pictured above was found in a Tortue Privee Monopoussoir Chronograph model 2714. This piece was part of the Collection Privée Cartier Paris (CPCP) line which was released to pay tribute to mechanical Cartier watches of the past. From around 1999 to 2008, Cartier produced watches containing movements made by workshops such as THA mentioned above.

While the caliber number “045MC” is exclusive to Cartier, the movement itself is not. The De Bethune Monopoussoir DB1 also uses a caliber which is based on the same framework as the 045MC. If you happen to know of any other watches using this movement, please add them to the comments below.

In an article by GEO at Revolution Magazine he says the following:

The calibre 045MC also has the special feature of a clutch system with a swivel pin. Which in fact means, that the transmission of the movement of the second wheel of the base movement to the chronograph’s central wheel, is effected through a double swivel pin. The advantage of this clutch, is that it suppresses the skip of he [sic] hand at the beginning of a translation movement, which is found with the mechanisms of chronographs with a lateral clutch.

Note the emphasis on the clutch system of the cal. 045MC, which eliminates the annoying seconds hand jump found in many chronographs.