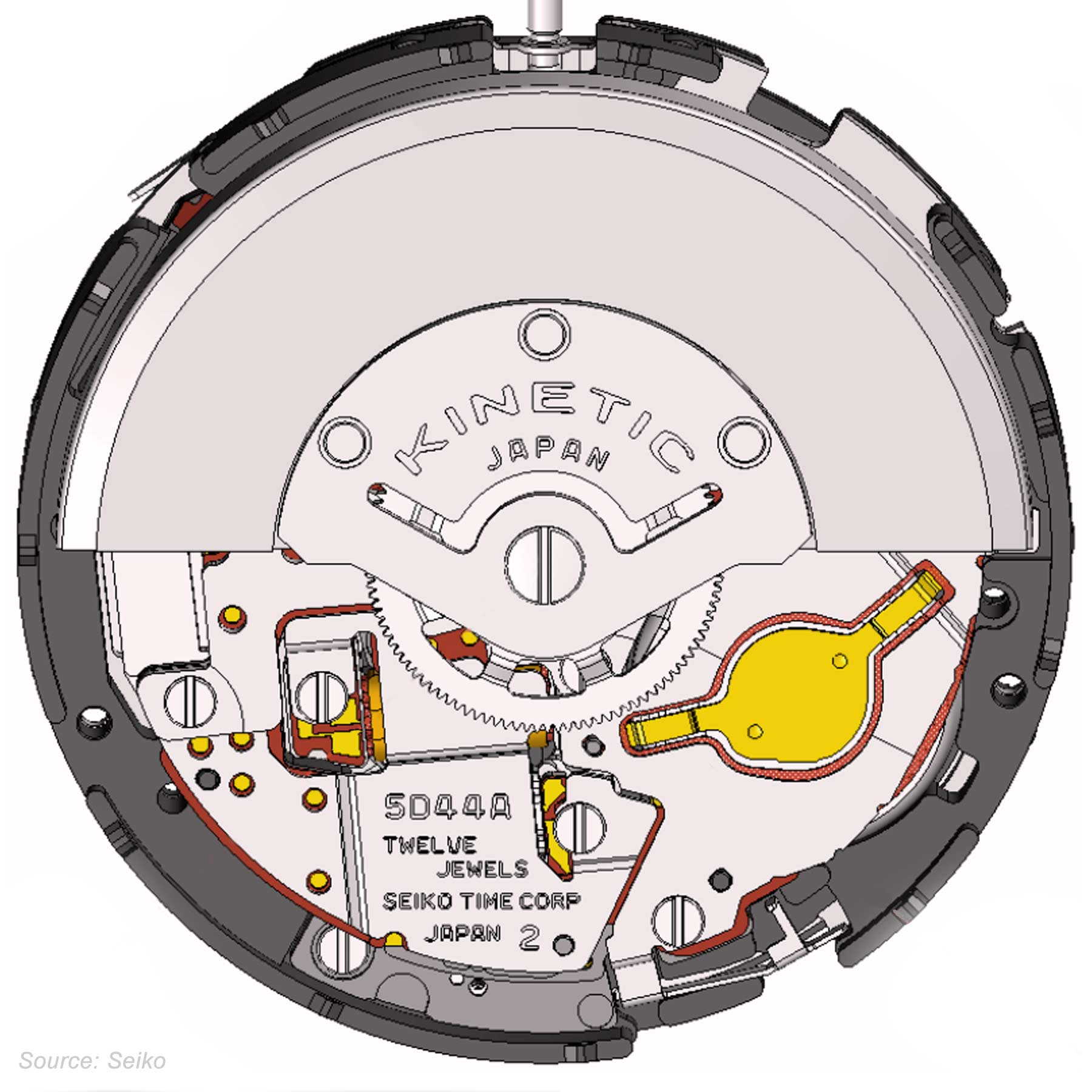 The Seiko caliber 5D44 (actually marked 5D44A) is found in Seiko Velatura Kinetic Direct Drive watches. This movement is made in Japan.

What is the A?

As with most Seiko calibers, the A represents the first version of the movement. If there are updates in the evolution of the caliber, the letters will advance in correspondence with the version. 5D44A is the same as 5D44. As far as we know, there have not been other versions of this caliber after A. The tech sheets from Seiko referring to 5D44A are dated 2007.

Is it an Automatic or Quartz?

In official documentation, Seiko describes the power supply as:

As for the aforementioned generating system, they also refer to it as a miniature AC generator.

Kinetic energy is transferred from from the rotor and stored in the capacitor. The way to achieve this is to swing the watch from side to side. Seiko states that it takes about 200 swings to get the watch charged enough to run normally. It is not recommended to set the time/date until the watch is fully charged (see more in the Hacking the Movement section below).

A full charge on the caliber 5D44 will last for approximately 1 month.

The 5D44 has a low energy warning which will cause the main second hand to jump every 2 seconds. When this begins to happen, the watch is telling you that 12 hours of power reserve remains. As mentioned above, using the chronograph will dramatically reduce this time.

“The watch remains accurate even while the second hand is moving at two-second intervals.” -Seiko manual

The 2 seconds jump may also occur after attempting to charge the watch after not using it for an extended period of time:

“If the watch has been left untouched for several years, the second hand starts moving in 2-second intervals after the crown is turned. This is not a malfunction. Charge the watch by turning the crown until the direct drive indicator hand moves from the standby position to the 0 position. It may take approximately 5 to 6 minutes.”

Just because your watch appears to stop holding a charge, doesn’t necessarily mean that’s the case: 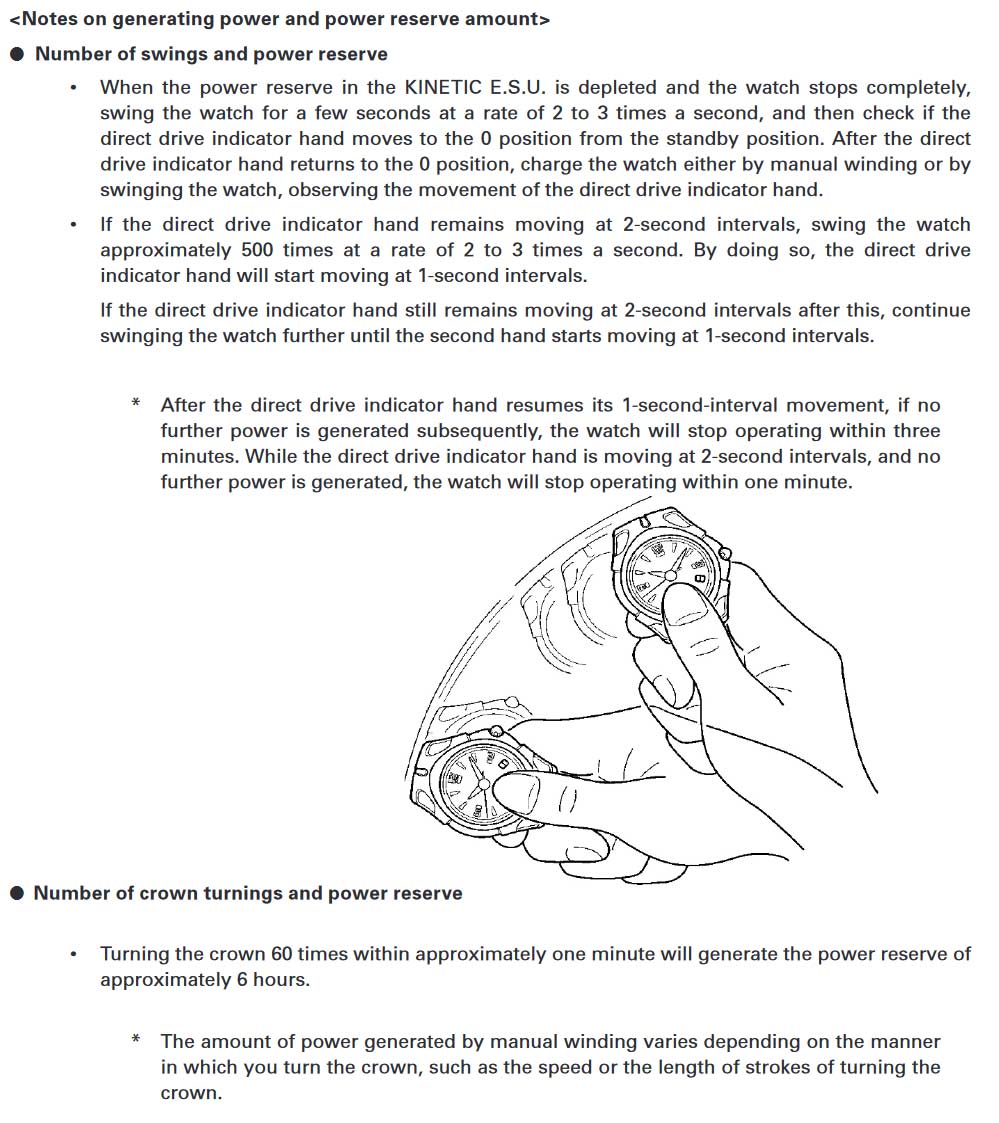 Is it possible to overcharge?

No. The 5D44 is equipped with functionality that prevents overcharging of the capacitor.

The 5D44 has a pusher at 10:00 which is used to reset the integrated circuit of the movement. If you watch still shows power reserve but stops working, you may need to perform the following reset procedure:

Pull out the crown to time setting position (2 clicks)

Press the button/pusher for 2 seconds or longer (Use a toothpick or pusher tool. Although the Seiko manual suggests using a ball point pen, it is not advisable).

Push the crown back in. At this point, the power reserve indicator should point to 0 (even if there was existing reserve).

Seiko claims that the caliber 5D44 will maintain accuracy of less than +/- 15 seconds per month at normal operating temperatures of about 5C to 35C.

This movement does not have a replacement price because it is not available for purchase. For parts or repair, you will either have to find a used model for sale or send it back to Seiko. The capacitor is available here for about $30.00 USD and may be what is needed to get your watch back in action. The Seiko part number is 3023 24L (302324L). Although it is an MT920, be sure that the prongs are correct for this model.