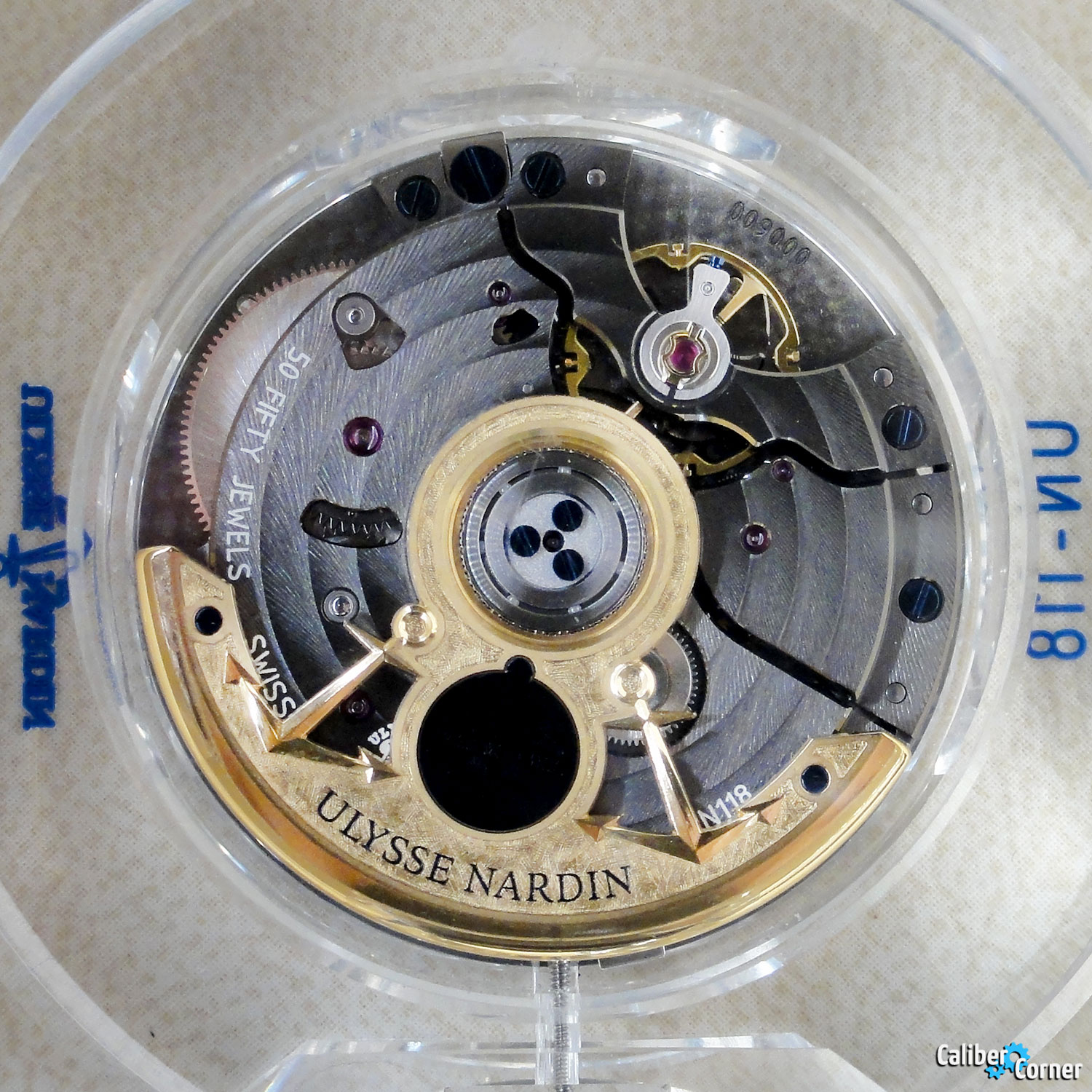 With the introduction of its new Caliber 118, Ulysse Nardin proves again its leadership in the innovative use of avant-garde materials in the watch industry.

Caliber 118 follows in the footsteps of Ulysse Nardin’s Caliber 66/67 Sonata, the first timepiece conceived and manufactured in house and Anniversary Caliber 160, but takes innovation in movement technology a further giant step forward.

The escapement of Caliber 118 is produced in collaboration between Ulysse Nardin and Sigatec in Sion, Switzerland.

DIAMonSIL is a revolutionary alliance of silicium and man-made diamond. It is an extremely light but hard material that eliminates friction and removes the need for lubrication of the escapement – the watchmaker’s holy grail.

Sigatec is the only company in the world capable of producing high-precision components both in Silicium and DIAMonSIL; a nanotechnology which has taken many years to develop.Caliber 118 will be the first member of a family of movements with an in-house-produced and patented DIAMonSIL escapement together with the in-house-produced oscillator adjustable with four screws and fitted with a silicium 1.1.1 hairspring. This oscillator, patented in 2007, was first put on the market in the Sonata Silicium in March 2008.

“Our policy to develop movement technology in-house enables Ulysse Nardin to master its own quality,” says the president and CEO of Ulysse Nardin, Rolf W. Schnyder. “Ulysse Nardin is committed to innovations that move the industry forward and in the creation of mechanical timepieces which will become the heirlooms for future generations.”

The Caliber 118 also features a 60-hour power reserve and its own date-corrector, allowing forward and backward settings in seconds. (source)

Sat 8/13/22 – So, the only problem with posting little messages like this is that when I want to add a new message, I don’t want to remove the old message in case someone didn’t see it yet. Maybe that’s the point of quick messages like this – if you didn’t see it, oh well. Plus it encourages everyone to scroll down and check this area… or maybe people don’t care about it anyway, so it doesn’t matter if the old message is gone or not. Maybe updates can be dated. When there is a new update, the old one will be removed. Or would it be better to create a page with a feed on it of all the updates? Tried doing that with KTT recently as a way to reduce dependency on outside social media channels. It isn’t finished yet, but the idea was to create a feed or stream page with mini posts that are posted whenever I feel like it. Like a new watch is in stock but a full photoshoot hasn’t been scheduled yet? Post a quick cell phone pic on the site feed. Or, ideas or plans for new features? Post on the site feed. Read a cool watch article and I want to share it? Post on the site feed, etc. Then, I could also post as much or as little as I want instead of feeling the need to follow social media constraints – what does it matter when Instragam won’t show my posts to anyone anyway unless I pay. And YouTube blocks all the comments from these accounts even though they let spammers repeatedly comment on the same video? Algorithms and social media holding pages hostage unless they get a copy of your photo ID is getting out of control =/

Sunday 8/14/22 – Going to start playing with some fun polls in the sidebar. See below this message.

Would love to replace the ugly g00gIe ad$ with watch brand and watchmaker site sponsors. On that note, would you be kind enough to turn your blocker off on this site?

Hello everyone! Testing out using this little area as a space for daily communications or link sharing. Not sure how many mobile users scroll down this far, but let’s see how it goes! Anyway, thank you for being here. Been promising big things to come and it’s true! Big things are coming as I am constantly working to make Caliber Corner better and better each day. One person show ain’t easy while running other businesses/brands/projects at the same time. Check back daily, it will be worth the wait 🙂