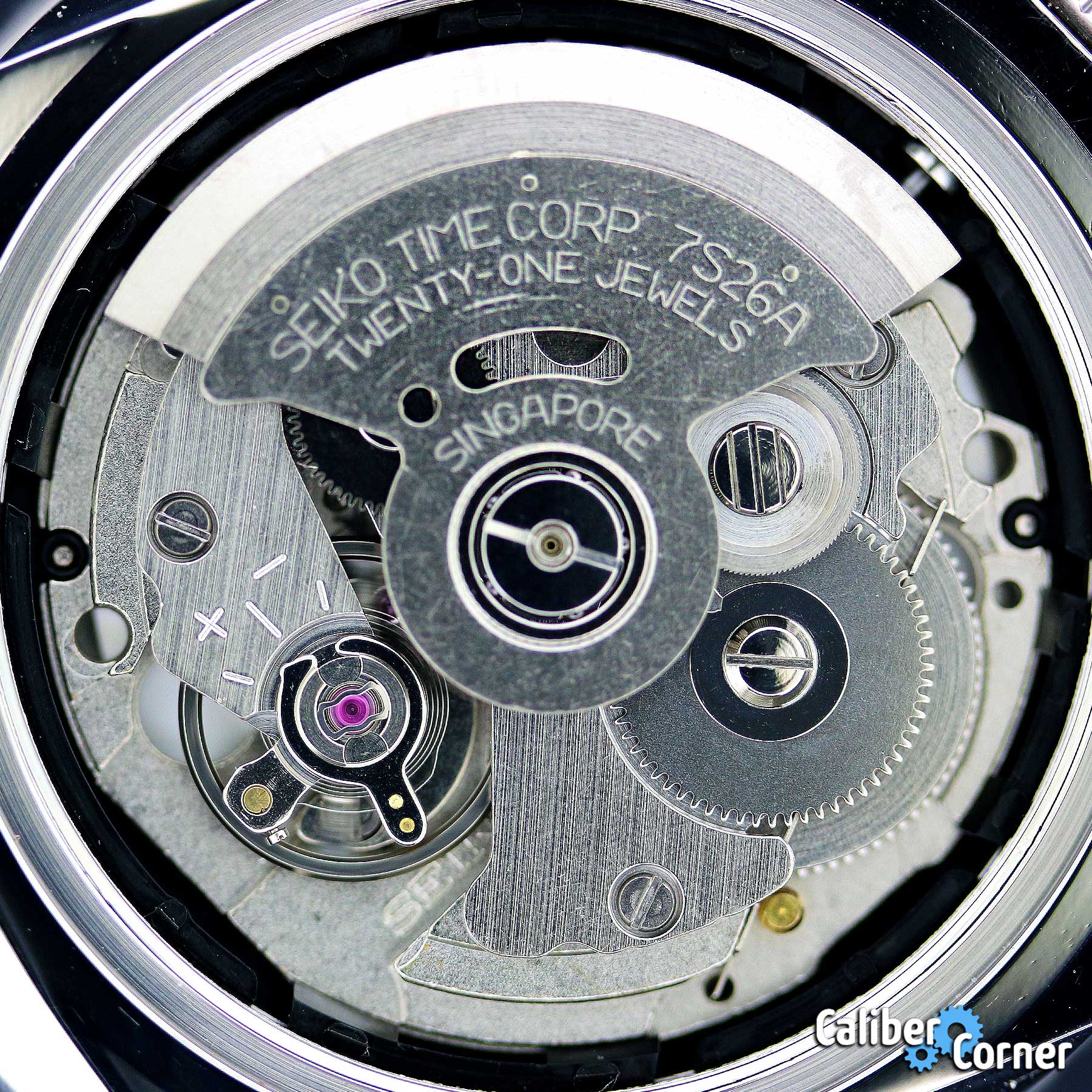 The Seiko caliber 7S26 is an automatic movement used in many popular Seiko divers and the entry level Seiko 5 watches. This movement was first released to the market in 1996. The most recent tech sheets found were dated 2011. Note: The caliber number of this movement is sometimes incorrectly written as 7526A – it should be the letter S not the number 5.

The caliber 7S26 is no longer in production and has been replaced by Seiko caliber 4R36 (or non-Seiko branded NH36A). Therefore, modern Seiko watches, such as the Seiko 5 Sports family and Next Gen Orange Monster, have since been upgraded to the 4R36, making Seiko collectors happy because the 7S26 seen here does not hack and is not hand-windable – two functions that have become more and more popular and are the main differences between the 7S26 VS 4R36 movements.

The letter indicates the evolution of the caliber 7S26. 7S26 and 7S26A is the first generation of this caliber and are the same. 7S26B is the second generation. 7S26C is the third and final version.

The difference between A/B in Seiko’s own words:

“Cal. 7S watches are changed from caliber “A” to caliber “B” in October 2006 production. According to the change, we would like you to pay attention to the design of the balance staff when repairing those watches.” -Source: Seiko Parts Catalogue/Technical Guide Cal. 7S26B, 7S36B. Published 2007.

The difference between B/C in Seiko’s own words:

“SEIKO Automatic Mechanical Cal. 7S26C / 7S36C are replacement caliber of Cal. 7S26B / 7S36B. Construction of the C series is same as B series, but using new parts. Since the size of movement is same as B series, the complete movement can be assembled into the watches which originally have the B series move-ment; however, as the parts are not convertible, please use the appropriate parts for each caliber.” -Source: Seiko Parts List/Technical Guide Cal. 7S26C, 7S36C. Published 20011.

The main difference between the 7S26 and the 7S36 is that the caliber 7S36 has 2 extra jewels. The 7S26 has 21 jewels and the 7S36 has 23 jewels. Many enthusiasts refer to this as 2 non working jewels. There is speculation that the 7S36 was supposed to eventually replace the 7S26, but that never actually happened.

The extra 2 jewels are on the “lower bridge for 3rd wheel and pinion”. They are lower cap jewels for the 3rd and escape wheels. But that’s a bit of a fancy answer – here’s an easy one: they are basically useless jewels and do nothing to alter performance… To answer your question, as far as complete swapouts go, they are interchangeable. But that would be a practice in futility – you wouldn’t gain or lose anything but (your own) time. I have both of these movements, have for years, and there is no practical difference. But to repair, there are some things to consider. Some of the parts are different in size – you can find the details around here somewhere, but the 3rd and escape wheels have different axle lengths due to the jeweled capping. Not to mention this bridge that simply does not exist in the 7s26. Maybe something else equally minor.

A Caliber Corner community member started a discussion in the comments below about the ability to adjust the time in reverse rather than by advancing the hands forward. As with many topic on watches and movements, answers on different sites vary and opinions are all over the place. We contacted Seiko directly to get an official answer straight from the source.

The instruction manual on page 13, step 5 says: “Keep advancing the hands to set the correct time.” Can you please clarify if this means that the hands should not be turned counterclockwise when setting the time? For example, if traveling to a different time zone or daylight savings time, is it ok to move the hands backwards several hours to set the current time?”

When traveling between different time zones, you can adjust the time backwards. We recommend you do NOT adjust the time when the watch is in the middle of changing the date.”

Therefore, it is confirmed that you can set your time forwards or backwards as long the date changing mechanism is not activated to switch over the calendar. 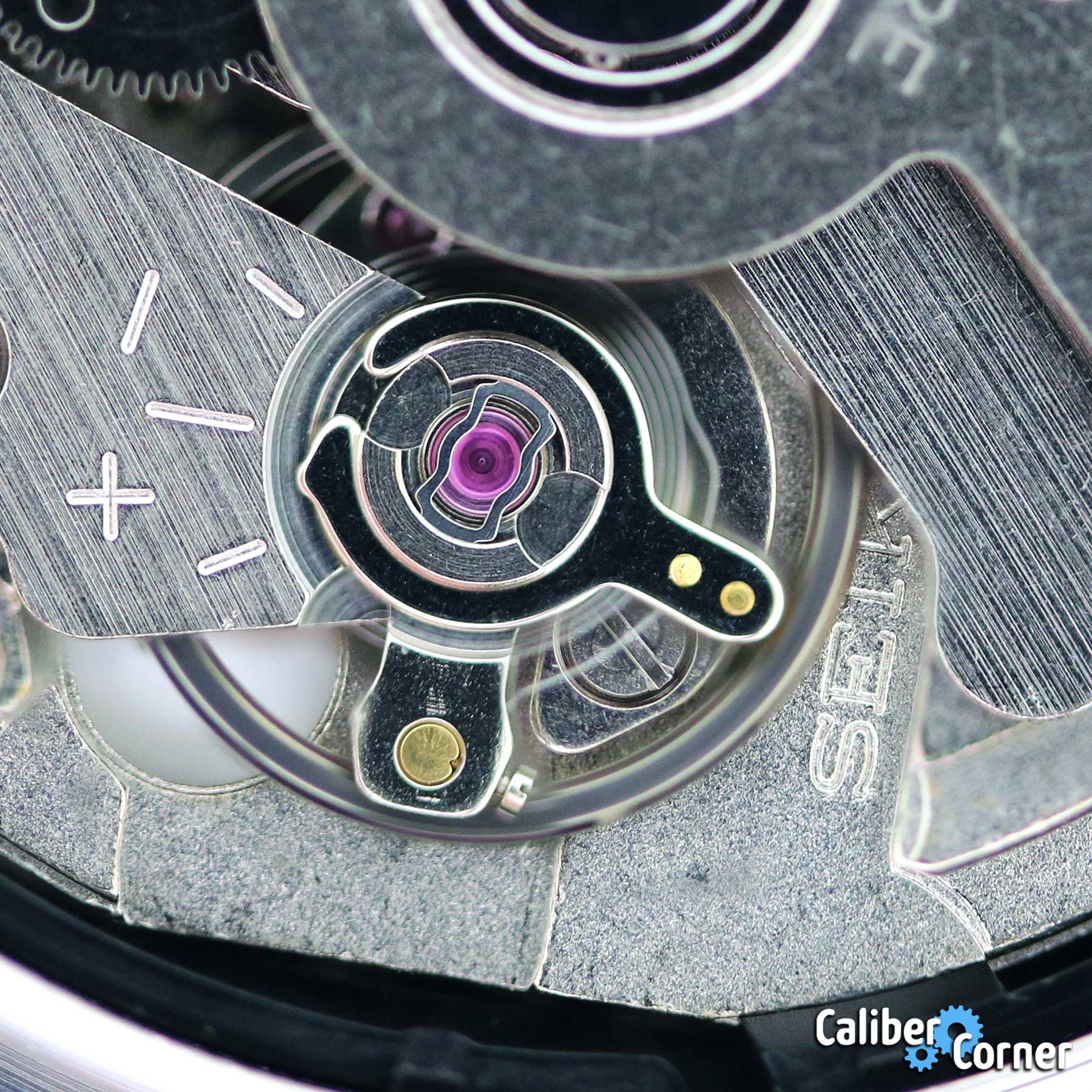 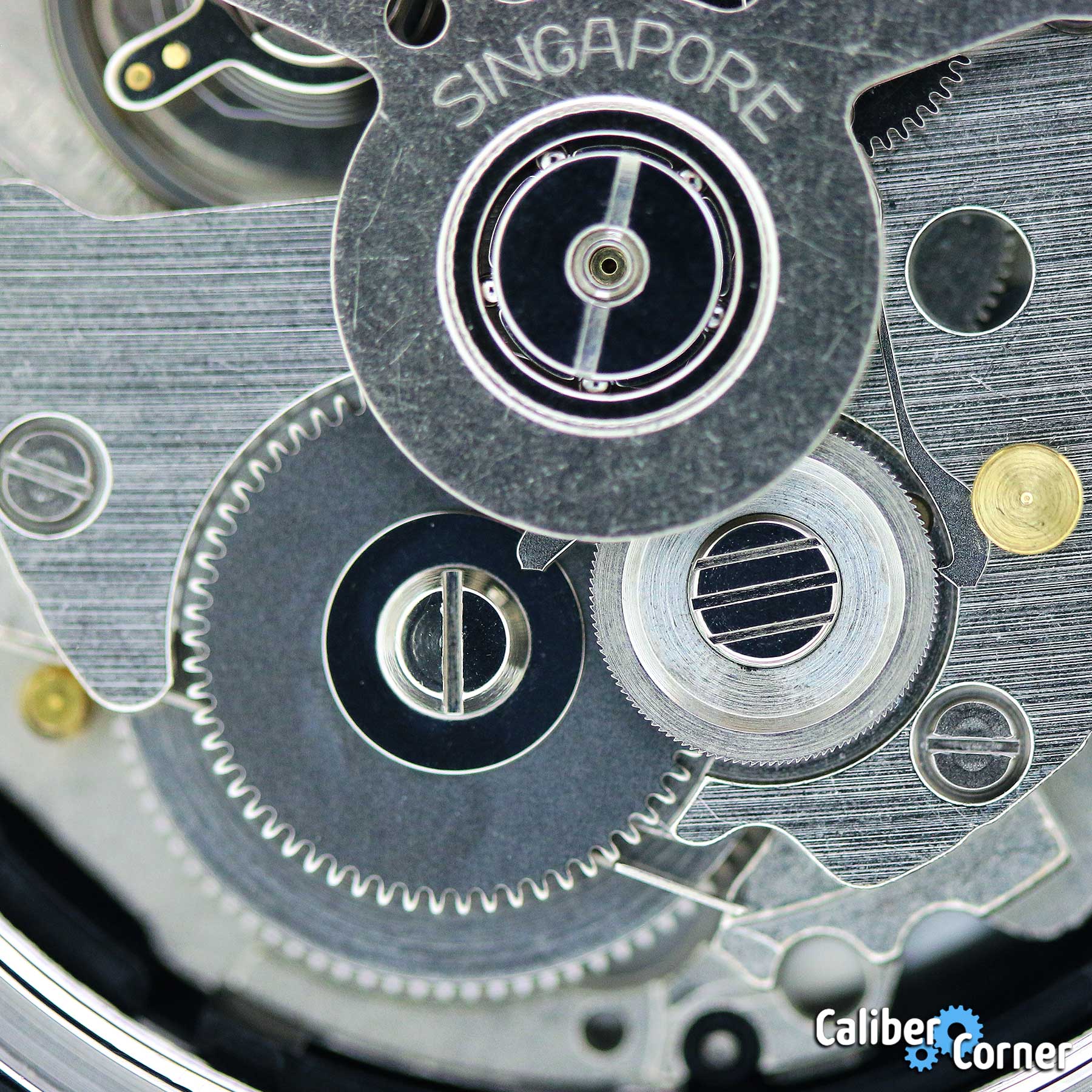 Example of a Seiko caliber 7S26C: 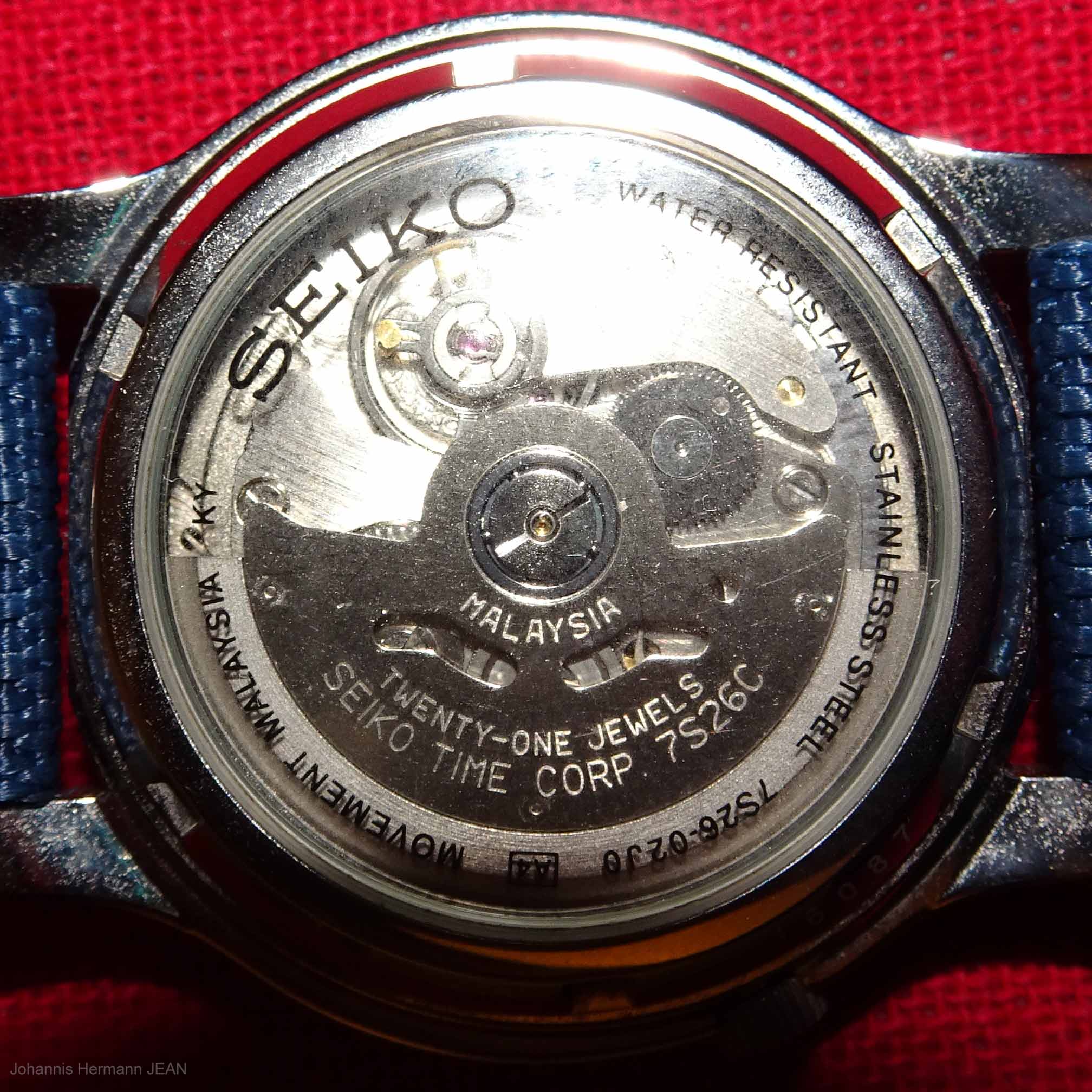 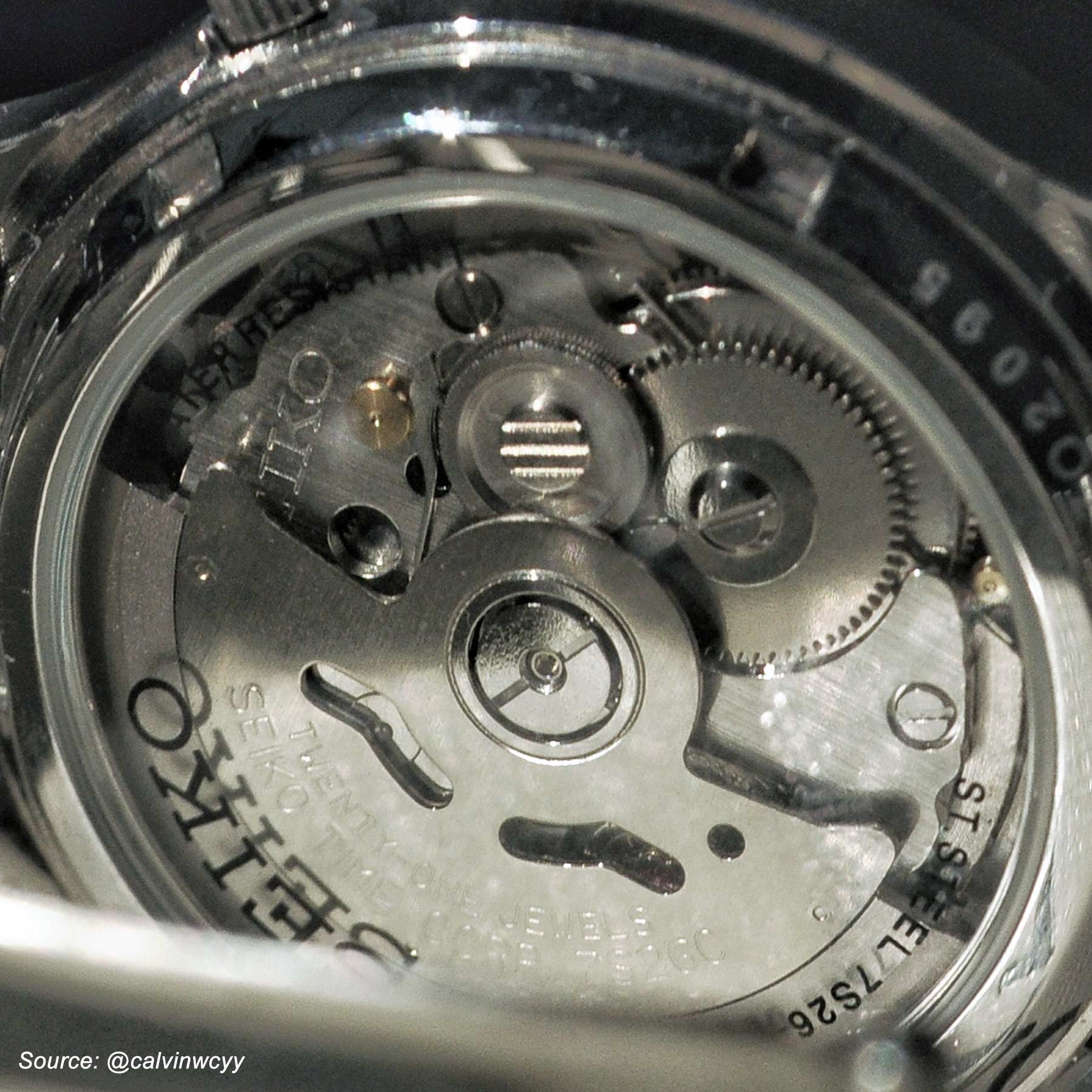 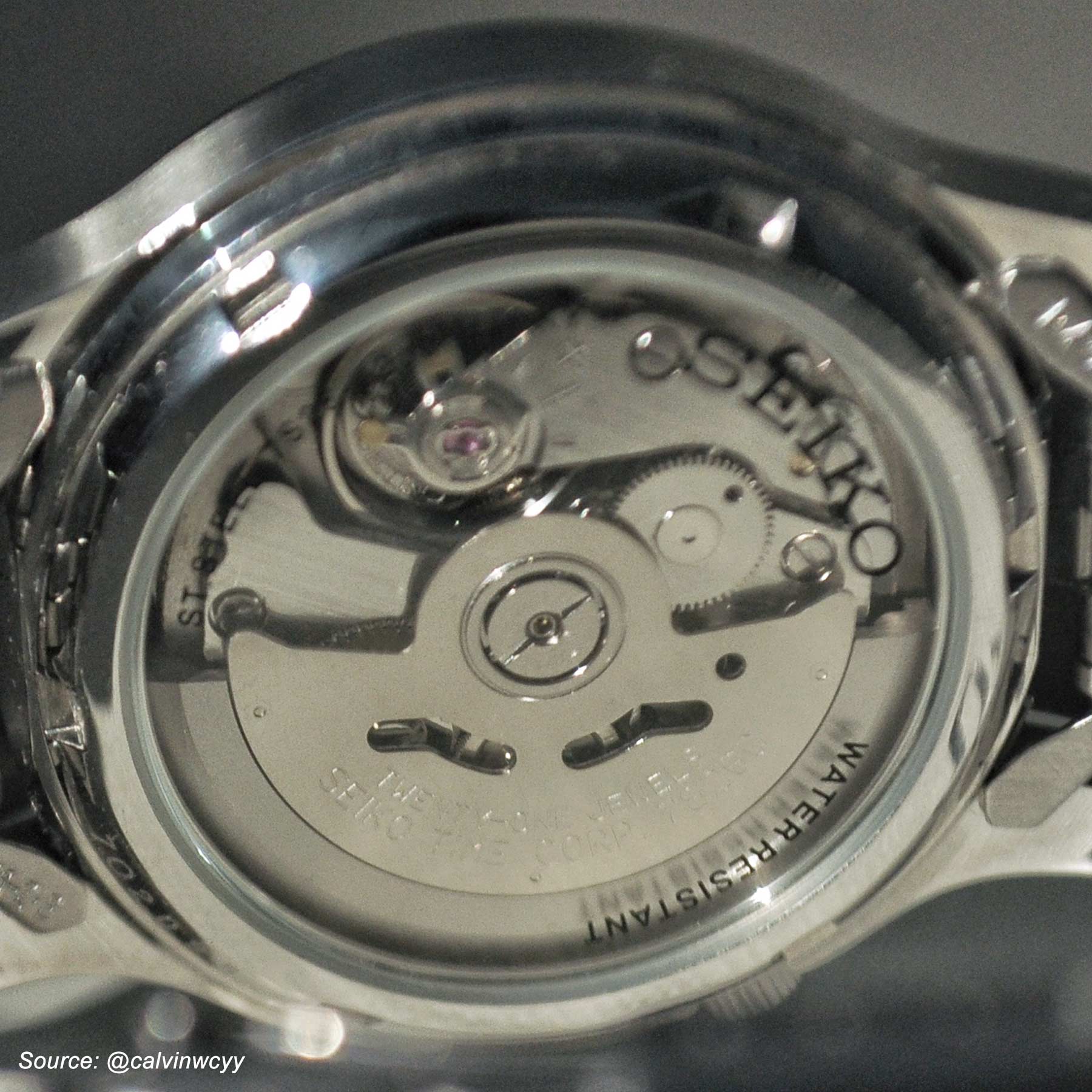 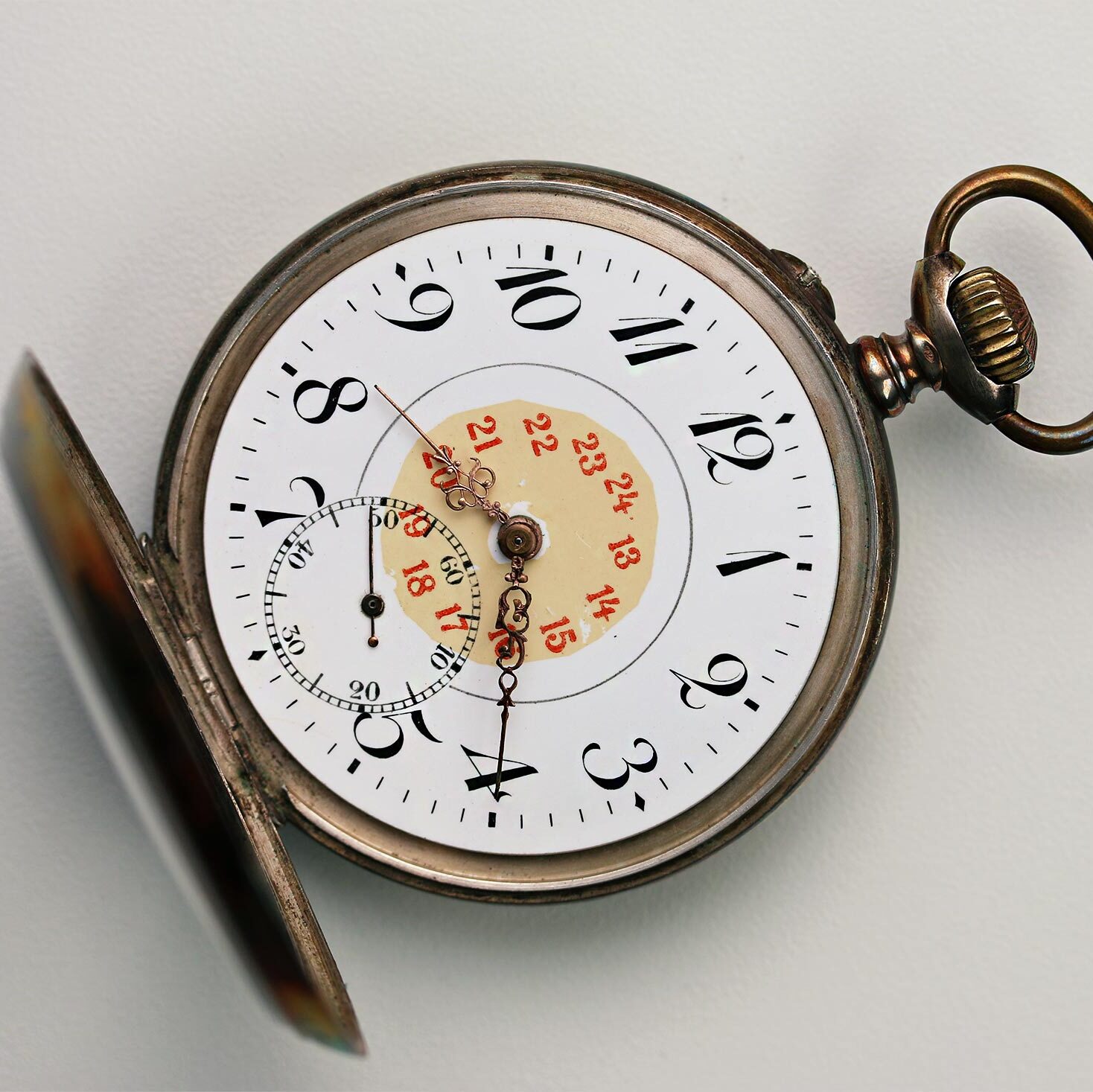