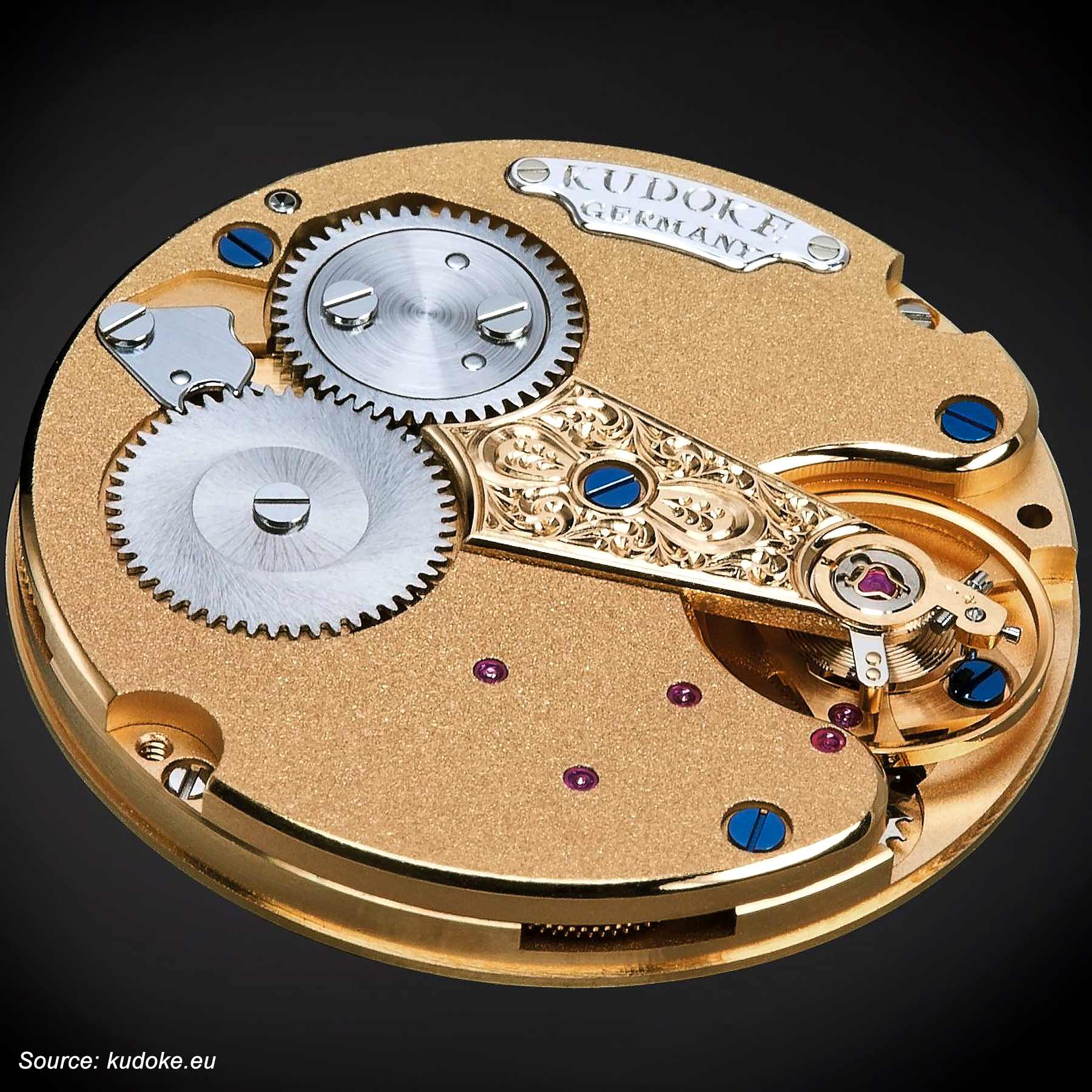 The  KUDOKE Kaliber 1 is an in-house, hand-wound mechanical watch movement. This caliber has 18 jewels and is made in Germany. This movement is found in KUDOKE 1 watches.

On March 3, 2018, @kudoke_watches posted the announcement of their new Kaliber 1 movement:

“Some news: Our Kaliber 1 is ready. Big thanks to our suppliers @habring2 and @uhren_werke_dresden. Want to see it in real? Meet us in Basel, March 22 until 27.” -source

Although regarded as an in-house caliber, the Kudoke Kaliber 1 also shares parts with the Austrian based Habring2‘s caliber A11. Many articles from the big watch blogs mention that the two calibers have a few shared components, but none dig deeper to reveal which parts are actually shared. We will try to reach out to KUDOKE for more information.

The design of the Kaliber 1 draws aesthetic inspiration from vintage pocket watches. For example, the main bridge appears to be inspired by 3/4 plate style that A. Lange & Söhne takes credit for. Also, the hand-engraved balance bridge which is common on many pocket watch grades.

“During the development of Kaliber 1 I got inspired by the design of historical English pocket watches whose use of forms I deliberately incorporated into my movement. Ages ago I bought an old English pocket watch movement, that lay unused in a drawer for a long time. One day it fell into my hands again – just as the idea of an own movement began to take shape.” –source

Despite a background of working in the complications department at Glashutte Original, Stefan Kudoke himself has been on record to say he values finishing the most. Finishing by hand is what the brand is becoming recognized for.

When it comes to the finishing on his base Kudoke caliber 1, the wheel bridge is finished by hand with a frosted texture. The balance cock is hand engraved with an infinity symbol.

It is possible to own a Kudoke 1 with different variations of engraving and skeletonization, all done by hand. Here are some examples: 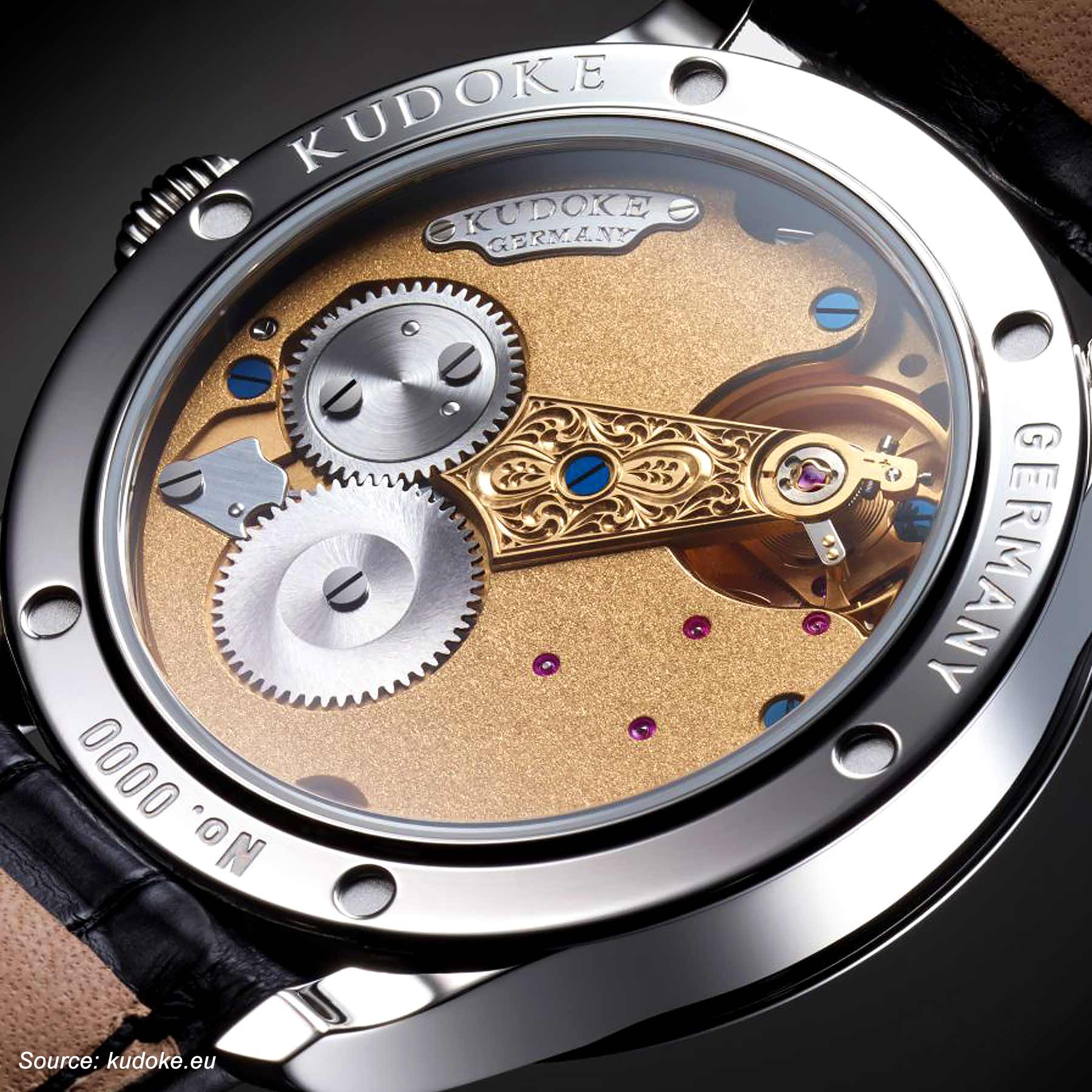 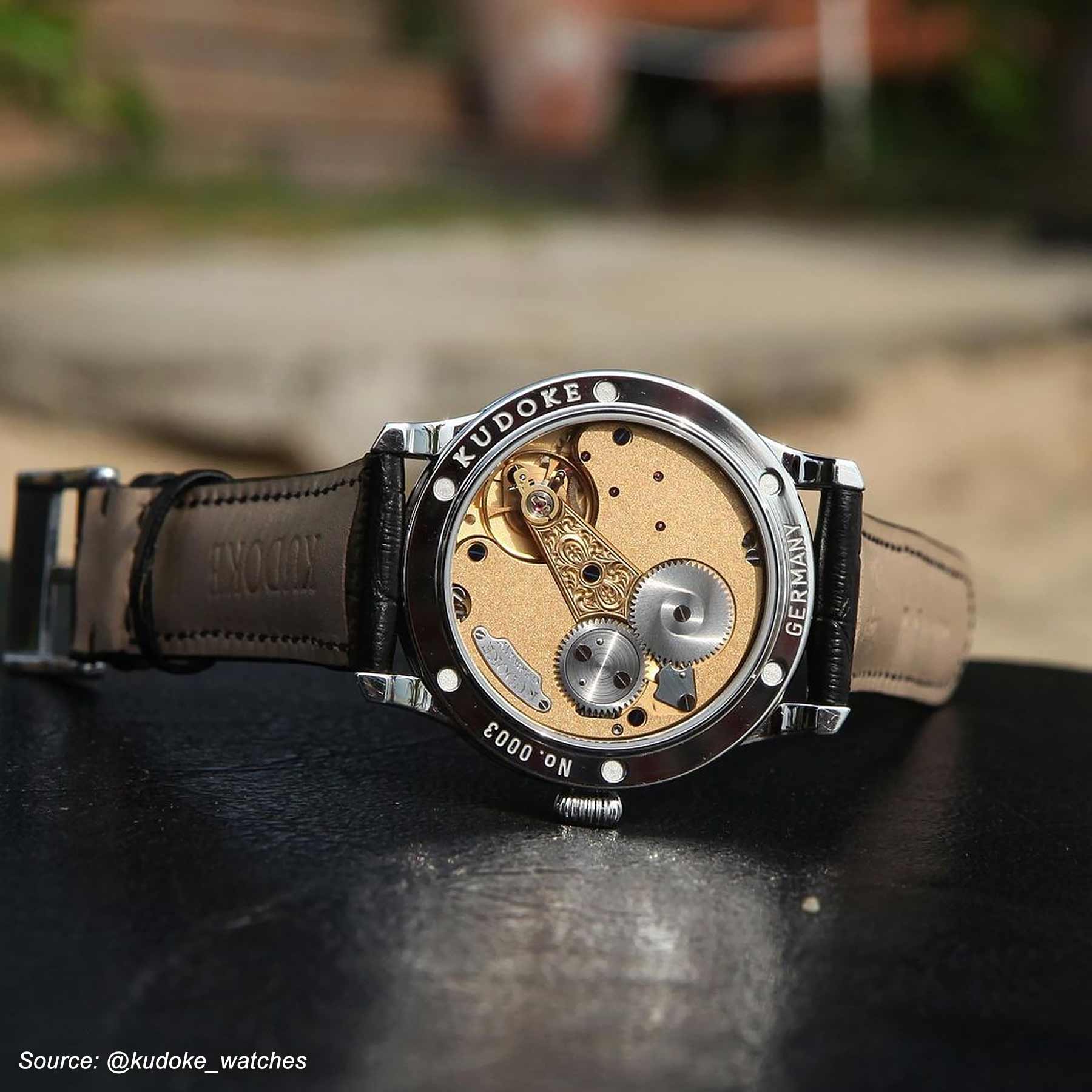 This post has been edited with more information. Originally, this is what was written:

KUDOKE has another similar caliber Kudoke 2 with the main difference between these two movements being that the K1 features a small seconds subdial at 9:00 and the K2 has a day/night indicator at 12:00. There does not seem to be a way to tell the difference between these two calibers from looking at the caseback side of the movement – in fact, the official Kudoke website uses the exact same movement images for both the Kudoke 1 and Kudoke 2 pages.

As it turns out, Kudoke uses the same images for both watches because they call the movements in both models by the same caliber number: Kaliber 1. As it turns out, although the two calibers may look similar from the back and are based on the same framework, they are not the same.

At the time of this post, Kudoke’s HANDwerk collection has two models: KUDOKE 1 and KUDOKE 2. Both are using the Kaliber 1 movement as a base, however, both watches feature different complications. For that reason, the movement in the KUDOKE 2 is called the Kaliber 1-24H.

This is how Kudoke describes the KUDOKE 2:

“A dial-side modification of the inhouse Kaliber 1 facilitates the unusual 24-hour indication at 12 o’clock.” –source

As mentioned above, while doing research for this article, it was confusing to find that the two models both use the Kaliber 1. It would make sense to refer to the movement in the Kudoke 2 as the Kaliber 2, and describe K2 as being based off of the K1 with the addition of a day/night complication. This would allow collectors to better distinguish between the two models, and would also make customers feel like they are getting more value from the brand, instead of just getting the same movement in two different watches.

Editor’s thoughts – Even for small brands, caliber numbers are important. That part of the basis of this website, to be able to identify and understand the differences between watch movements. Often times, that starts with the caliber number. You can see with well-established movement producers, that organization and consumer comprehension goes a long way. For example, look at the ETA/Valjoux 7750 with its basic chronograph function. Then look at the 7751 which adds a triple date and moonphase. Imagine if the 7751 was referred to as 7750-TDM or something like that. These two movements are easily understood by enthusiasts because they have different identifiers – even though they look the same from the back.