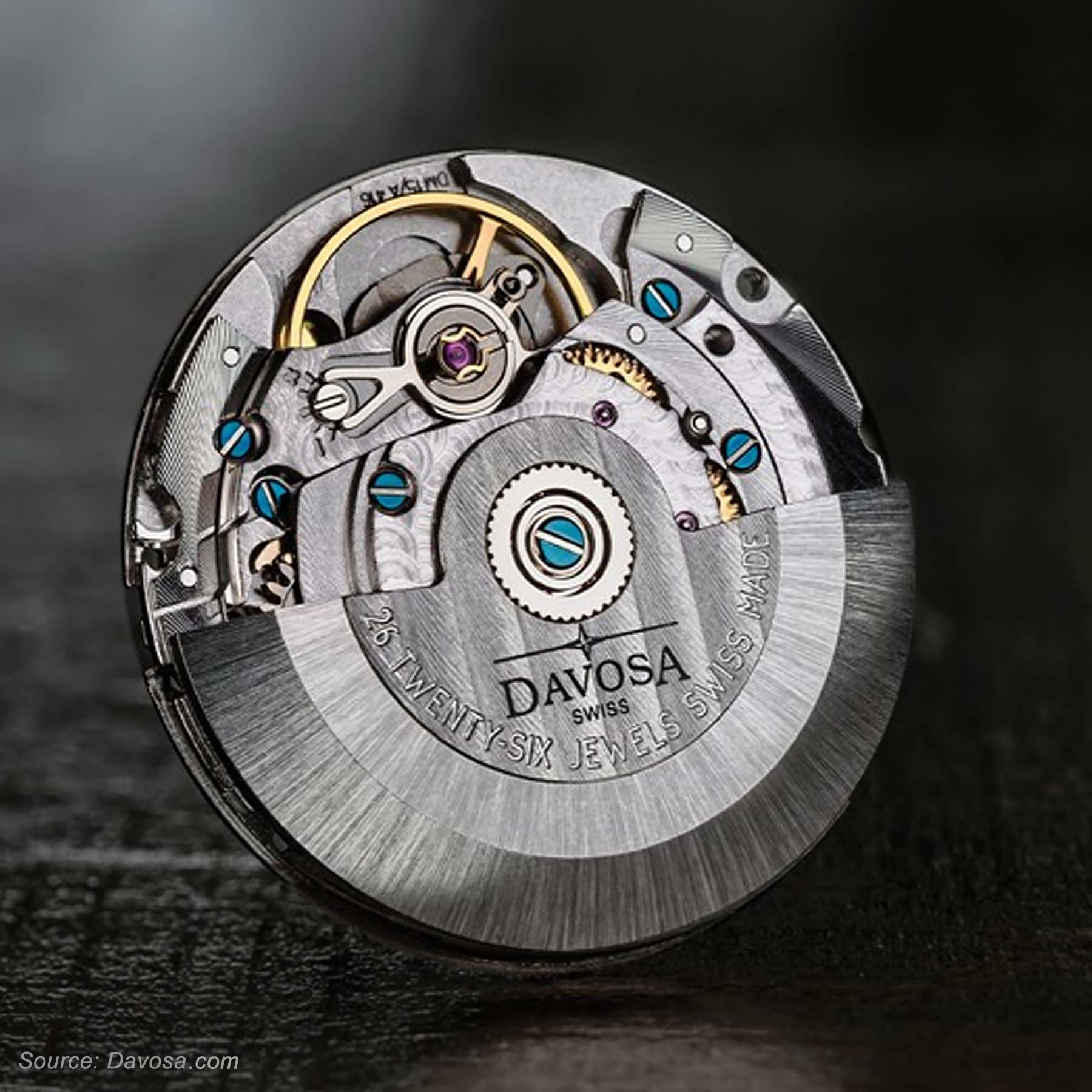 Davosa’s official description of this movement (mostly a repeat from above):

On the same page, Davosa also says this about the movements found in their watches:

“All DAV calibers are made in Switzerland by well-known movement manufacturers such as ETA, Sellita, Soprod and others. Every movement receives our utmost attention in terms of both materials and quality. Precision, reliability and level of performance are the key features of all our products.”

Is the Davosa DAV 3021 a Sellita or ETA base movement?

As with many brands that started with ETA and switched to Sellita, Davosa states that the DAV 3021 can be either an ETA 2824-2 or Sellita SW200-1. Of course, it’s always nice when brands create a new caliber number to distinguish between the two, but Davaso is yet another brand which did not make such a decision. Therefore, it’s what Caliber Corner calls a Forest Gump Movement. In other words, you never know what you’re going to get – until you open it and find out for yourself. With that said, older Davosa models are more likely to have the ETAs and newer models will probably be powered by the Sellitas. The reason for this is that as brands worked through their existing ETA stock they started using Sellita as ETA movements became unavailable to non-Swatch Group watch companies. This does not mean it’s impossible to find a newer watch with an ETA, just less likely. There are still new old stock (NOS) ETA movements in the world, so anything is possible. If you are buying new from the brand and want to know before placing your order, try to contact them directly. Either way, please comment below as to which movement maker your DAV 3021 hails from.

Davosa is yet another brand which still refers to their movement as being based on an SW200, despite there being a significant difference between the SW200 and SW200-1 (significant enough for Sellita to regard them as two different calibers). While there is no guarantee that your Davosa watch does not contain an SW200, it is more likely that it has an SW200-1. The reason would be that by the time brands like this made the switch to using Sellita over ETA, the caliber being ordered from Sellita would have been the SW200-1. It’s the watch industry, so you never know until you inspect the movement yourself – they are all DAV 3021 after all!

What grade of Sellita or ETA does Davosa use?

From the marketing image presented on Davosa’s official movements page, the DAV 3021 appears to be a Top grade decorated Sellita with Incabloc anti-shock. However, when asked on the brand’s official Facebook page on July 5, 2018, the answer was that it depends on the watch:

“DAVOSA Watches We install movements of different quality levels – depending on the model. In general, however, all our movements are tested by us in different positions and, if necessary, will be regulated when they are installed, so that movements in the “standard” version can achieve the same accuracy as in the “top” version. In general, the movements only differ in the tolerance limits, which are guaranteed by the manufacturer, since each movement – whether in the quality level “top” or “standard” can be configured according to individual requirements /wishes. The general components in the movements are the same.” –source